What does an options premium really mean?

I am taking a derivatives class at college, and I am getting slightly confused about how to understand options premiums. I have a couple of questions, specifically on this slide presented in class: 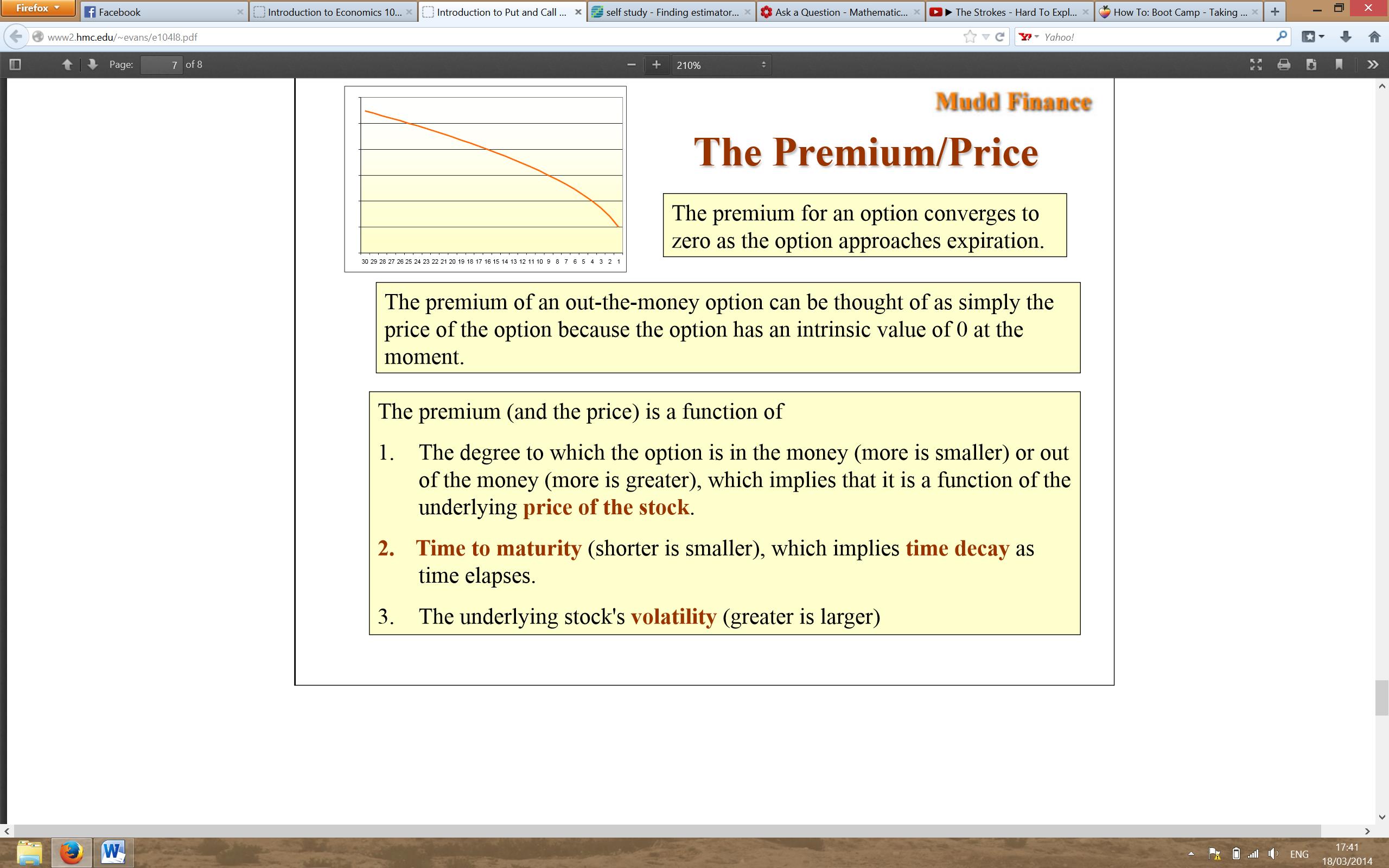 2) What is the intuition behind the fact that an option's premium rises as its underlying stock's volatility increases. Is this because a more volatile stock will likely exhibit larger price swings, hence making calls and puts more profitable for the buyer?

Intuitive? I doubt it. Derivatives are not the simplest thing to understand.

The price is either in the money or it isn't. (by the way, exactly 'at the money' is not 'in the money.') An option that's not in the money has time value only. As the price rises, and the option is more and more in the money, the time value drops. We have a $40 stock. It makes sense to me that a $40 strike price is all just a bet the stock will rise, there's no intrinsic value. The option prices at about $4.00 for one year out, with 25% volatility. But the strike of $30 is at $10.68, with $10 in the money and only .68 in time premium. There's a great calculator on line to tinker with.

Volatility is a key component of options trading. Think about it. If a stock rises 5%/yr but rarely goes up any more or less, just steady up, why would you even buy an option that was even 10% out of the money? The only way I can describe this is to look at a bell curve and how there's a 1/6 chance the event will be above one standard deviation. If that standard deviation is small, the chance of hitting the higher strikes is also small.

I wrote an article Betting on Apple at 9 to 2 in which I describe how a pair of option trades was set up so that a 35% rise in Apple stock would return 354% and Apple had two years to reach its target. I offer this as an example of options trading not being theory, but something that many are engaged in. What I found curious about the trade was that Apple's volatility was high enough that a 35% move didn't seem like the 4.5 to 1 risk the market said it was. As of today, Apple needs to rise 13% in the next 10 months for the trade to pay off. (Disclosure - the long time to expiration was both good and bad, two years to recover 35% seemed reasonable, but 2 years could bring anything in the macro sense. Another recession, some worldwide event that would impact Apple's market, etc. The average investor will not have the patience for these long term option trades.)

6
Can the Delta be used to calculate the option premium given a certain target?
7
Why does a call option's price increase with higher volatility?
4
What fundamental value do Options give the economy?
1
How does taking profits from a CALL option contract work?
1
Does increasing value of a still-out-of-the-money option that you wrote (covered) pose a risk to you?
0
How does an option's premium depend on its strike price?
1
Volatility and Call Options
0
Withdraw a covered call premium right away
0
How can the prices of two deep ITM options of the same underlying, but at different expiration dates, go in different directions on any given day?
1
Aren't options priced asymmetrically for Inverse and Leveraged ETFs, for the same underlying index?