Is supporting a charity through specialty license plates tax-deductible?

When I purchase or renew a vehicle registration with one of these specialty license plates, does the portion of the registration fee which gets ultimately sent to the charity count as a Charitable Contribution which I can deduct on Form 1040 Schedule A?

Since I was asked what the receipt looks like, here's a redacted version of the receipt and certificate of title that the state sends. It lists the $40 "Special Plate Fee", but doesn't specify what charity it is for or whether it is deductible: 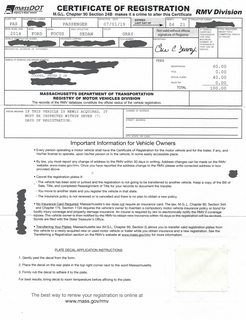 Yes, the portion donated to the qualifying charity is tax deductible. As you note it's how much goes to the charity and not how much extra you pay, because in some cases part of the extra fee covers manufacturing cost of the plate for the first year.

This is in line with other charitable giving situations in which you receive something of value (like a charity auction), the deductible portion is that in excess of the value you received for your donation and that's part of the reason they show the breakdown of manufacture cost vs donation on MA's RMV site, note that not all of their specialty plates are supporting charities.

It doesn't matter if your receipt isn't explicitly stating that a portion is charitable contribution, the amount of donation is small enough not to require thorough documentation. If you were pressed, you have the license plate and the MA RMV website as supporting documentation.

Edit: Since this is still open, I've added some sources and clarified/removed redundancy above.

From Sapling - Can I Deduct My License Plates on My Taxes?:

Charitable Organization License Plates
License plates that support a charitable organization are typically more expensive than traditional license plates. The extra fees are a donation to the specific charity and are usually tax-deductible. In order for a charitable contribution to be deducted, it must be given to a qualified, recognized non-profit organization. The exact amount of the contribution is the only cost that qualifies as a tax write-off. The cost of the license plate itself is not deductible. Charitable contributions are only available to taxpayers who itemize their deductions.