What are the practical implications of buying a house in a high Earthquake risk area?

I am purchasing a house in Indio California, that is described as being in an high risk Earthquake area. That sounds scary but the actual stats for the area are less so:

A 3 magnitude Earthquake is like having a truck drive by which isn't too bad.

But what are the practical implications of this data?

Essentially, I am not really sure how to respond to the data.

Earthquake insurance in California is expensive. Like very expensive. It's not required by lenders and you can get a mortgage without needing earthquake coverage. (You still need homeowners insurance, just not the earthquake rider.)

Generally, the reasoning is that houses in CA are built to withstand most earthquakes. The building code requires it. During most quakes, the only damage is from stuff breaking and falling inside the home. If a major earthquake were to happen and houses were destroyed, while your homeowners policy may not cover it, federal and state FEMA-like funds may (or may not) become available.

Yes, it's a risk, but if the lenders don't require it, most homeowners opt out of earthquake coverage because of cost.

To answer your second question: yes, there are things you can and should do inside the home to better protect you, especially if you have young children:

Past earthquake data is fairly useless because it doesn't go back far enough. Apparently the First Nations and Mexicans didn't keep the data.

The ruling factor for earthquake damage is the soil the house is built on. Your town or county should have a lot of data about soils and how that affects buildings. You need to pay very close attention to that risk data. 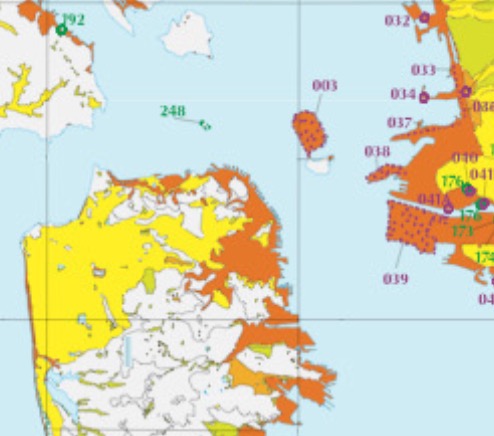 Houses above bedrock do very well, houses in liquefaction zones get randomly smashed.

Everybody forgets wildfire. Now that we're pretty sharp on building for earthquakes, the much bigger threat in California is actually brush fires. This is a constant in all but the wettest parts of the coast and Sierra. 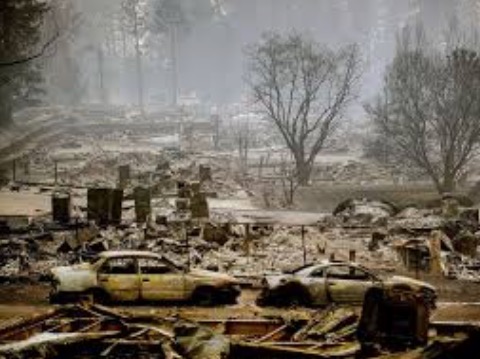 First and most important, don't buy in orange zones on the liquefaction map. So have a talk with your city or county about that data, supposedly USGS has a bunch of data but what they share on their website seems to focus on the Bay Area.

Now, they talk a lot about defensible space. That's fair, I don't disagree. But it's not a cure-all. Look at neighborhoods that burn, you don't see a whole lot of single houses saved by the owner's taking defensible space seriously. So on the toughest fires, it either needs eveyone to do it, like vaccinations, or some fires are just too big for even it. All that to say, I think neighborhood matters too. If the neighborhood is too pregnant with fuel, it's at risk.

Mind you, right now as you're house shopping, you're in the rainy season, so everything looks lush and verdant. Lawns get watered because there's not a drought right now. "That greenery couldn't all burn!" It's exactly what will burn. Eucalyptus trees are downright explosive, they are so laden with oil. Rains are strong this year so things will be watered in 2019, but in another year, it will be brown and sun-bleached. Talk again to your city about wildfire risk.

Lastly, as far as earthquakes, there are many retrofits that can be done to keep a house on its foundation and in one piece during a quake. Some are mandatory and those need to be done to Code, but others are optional and can be easily added during other work, particularly if the drywall is off.

Steel frame houses are available. Steel just has a good combination of strength and flexibility and is a good choice for earthquake zones.

Also, lightweight roofing is available that gives the earthquake less weight on the roof to shake against the walls with leverage. Stone-coated-steel-roofing is a plastic roofing with an interlocking steel-flashing in it. Or standing-seam metal roofing is available in aluminum, copper, painted steel, galvalume, and stainless-steel.

Next "big" earthquake for CA is predicted to be a doozy, per this Sept 2017 LA Timess article, with a map showing an earthquake starting in the Salton Sea, just south of Indio, and breaking to the north

California could be hit by an 8.2 mega-earthquake, and it would be catastrophic

A magnitude 8.2 earthquake would rupture the San Andreas fault from the Salton Sea — close to the Mexican border — all the way to Monterey County. The fault would rupture through counties including Los Angeles, Riverside and San Bernardino.

An 8.2 earthquake would be far worse here because the San Andreas fault runs right through areas such as the Coachella Valley — home to Palm Springs — and the San Bernardino Valley, along with the San Gabriel Mountains north of Los Angeles. The fault is about 30 miles from downtown Los Angeles.

So you could be in a great position to see a "whole lotta shakin' going on".

If you are buying an older house, it might not stand up to it. A new house may survive but be badly damaged. We don't get much seismic activity on the east coast, so our tolerance to risk of something that will likely never occur is high. Your tolerance for something that is pretty likely to occur and some would say is overdue (big earthquake every hundred years or so) may be different.

Not the answer you're looking for? Browse other questions tagged united-states real-estate insurance natural-disasters or ask your own question.