As far as I know, salaries in popular areas are not much higher than in non-popular areas. Also, for example, the Helsinki region is near Estonia, a source of cheap labor. So, based on this, the cost of constructing a new house in Helsinki should be about the same as in Oulu. So, the cost of a new house on leased land should be 2440 EUR per square meter near Helsinki (but the total cost of ownership would be higher because of the rent payments for leased land).

Also, a city near Helsinki, Espoo, has plenty of unbuilt land. As a matter of fact, there is agriculture in Espoo! This all shows that there should be plenty of land to build apartment buildings on. Thus, a house on non-leased land should cost about 2440 EUR per square meter, because a fair price for land on areas where there is plenty of land is approximately 0 EUR per square meter (well, it is actually the opportunity cost, but it is very close to zero).

So, what explains these high property prices in popular areas?

I recall a quote "The market can stay irrational longer than you can stay solvent", which kind of describes this situation. The high property prices here are not something which has occurred only in the very recent past; the situation has been on for more than 10 years.

Finnish house prices have been climbing for several years, with nominal house prices increasing by about 150% from their 1993 trough (see Figure 1). The pace of this sustained increase exceeded that of consumer prices and housing became significantly more expensive in inflation-adjusted terms. In 2012 house prices adjusted by the private consumption deflator (hereinafter referred to as "relative house prices") were 84% above the level of 1993. (Source) 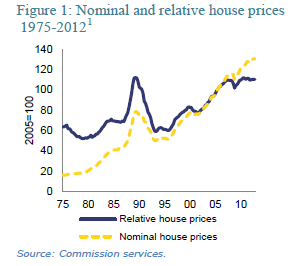 Price to income ratio in Finland: 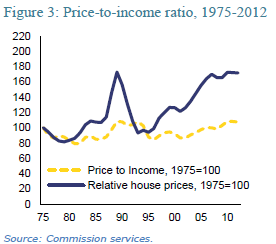 The sustained increase in house prices was mirrored in the accumulation of household debt. Private sector debt (households and non-financial corporates, but excluding the financial sector) reached 184% of GDP in 2012 (est.). (Source) 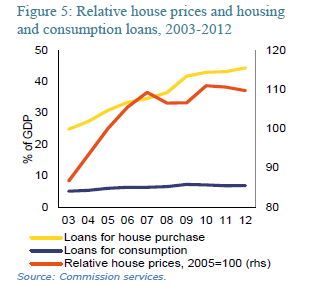 The comparison of valuation ratios with their historical average provides first-order information on potential housing market mispricing. However, these need to be interpreted in the context of any important structural shifts affecting housing demand or supply. For Finland, important factors include a booming population in the Helsinki area on the one hand and restrictive land allocation procedures and lags in the construction sector on the other hand. (Source) 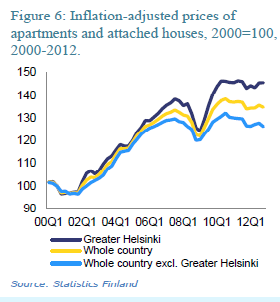 However in London (From Economist):

The London phenomenon is due to a restriction of supply at a time of soaring demand. In the north of England, slow economic growth, low population growth and plenty of new construction mean that there are lots of homes and not all that much demand for them. In London and the south east, by contrast, tight planning rules and a shortage of land mean that relatively little new housing is being built, even as a booming economy and spectacular population growth create lots of demand for it. 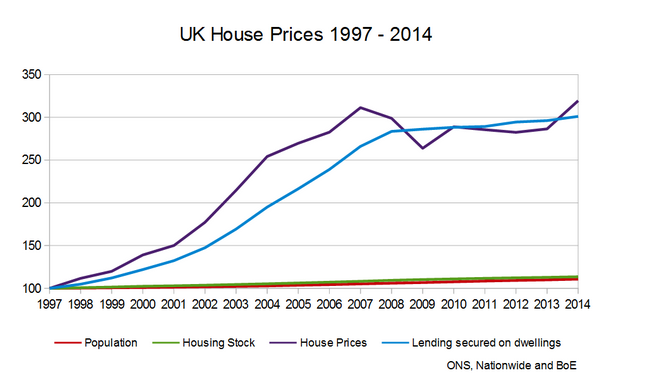 (Source of above graph)

Also, this article explains causes and consequences of high housing costs of another such area (California).

"The market can stay irrational longer than you can stay solvent" does not actually describe what's going on.

I don't know your area, but I know that NYC is not a fad, not a bubble. It's never been cheap, and with today's technology, never will be. (Give me a new mode of transportation that will put me in midtown in 20 minutes from a couple hundred miles away, and this all changes, of course).

The city where I bought is depressed, but isn't likely to get to more than 50-100% the current price level to reach an equilibrium.

In the end, there are cities around the world that defy the averages. Those in demand will command prices that the average families can't afford, and those shunned, will keep a lower than average cost until something fundamentally changes in that area,

6
How do I calculate the (likely) property taxes on a new home in a new area?
1
Why are Rausch Coleman houses so cheap? Is it because they don't have gas?
5
Merits of buying apartment houses and renting them
0
Rental Property Detroit; profitability
44
Should I buy a house now before prices rise even more?
2
Building a new house to replace an existing mortgaged house
1
Competitive Market Analysis when have to extrapolate price per acre and price per square foot of building?
40
Is there a price point beyond which it no longer makes sense to buy an apartment or house?