Would you withdraw your money from your bank if you thought it was going under? [closed]

Ask Question
Asked 11 years, 5 months ago
Active 11 years, 1 month ago
Viewed 932 times
6
Closed. This question is opinion-based. It is not currently accepting answers.

The Texas Ratio attempts to measure how well a bank can cover its losses on nonperforming loans. A ratio over 100 indicates the bank is in trouble.

I cross referenced the texas ratio for banks obtained from here (last updated 10/2009) with the latest list of bank failures from the FDIC (last updated 8/2010).

The ratio does appear to be a fairly good indicator of banks that go belly up. 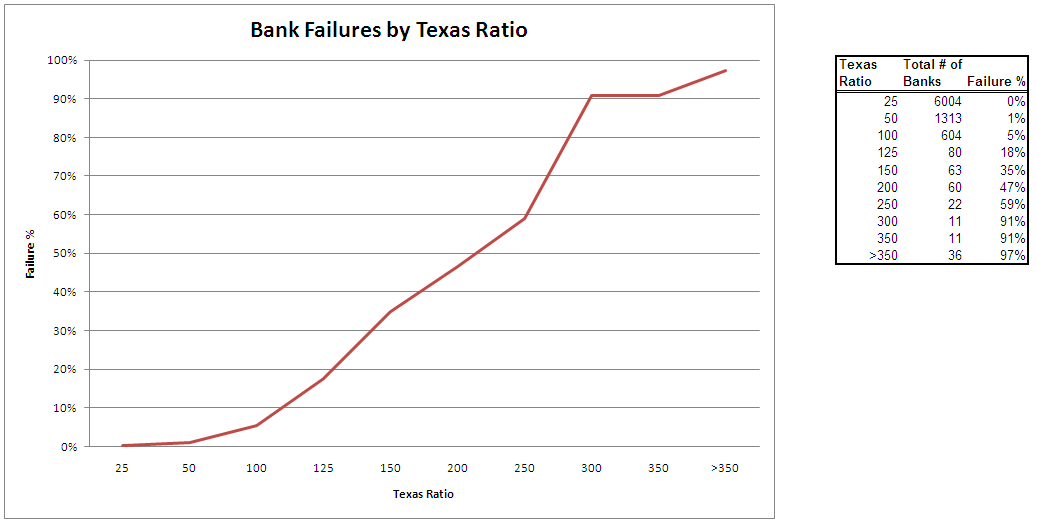 If my bank has a ratio over 100 I would move my money to a safer bank. Especially since the FDIC is broke.

Would you move your money?
What Texas Ratio threshold would you tolerate?
Would you leave your money in a high texas ratio bank if the amount was covered by FDIC?

UPDATE: Many of you will be happy to know that the FDIC is looking to provide UNLIMITED coverage (instead of the current $250,000 limited coverage) for checking accounts. Of course, the FDIC is still broke but why let that stop them.

The 151 closures nationwide so far this year tops the 140 shuttered in all of 2009 and is the most in a year since the savings-and-loan crisis two decades ago.

The growing bank failures have sapped billions of dollars out of the deposit insurance fund. It fell into the red last year, and its deficit stood at $8 billion as of Sept. 30.

There's obviously a lot of discussion surrounding your question, but if I thought a bank was going under, then yes, absolutely I would withdraw my money.

Now, we can debate whether me thinking the bank was going under was foolish or not, but if I truly believed it, I can't see why I would sit around and do nothing.

If the FDIC didn't insure your deposit, there would be a run on EVERY bank, so there is no way the government will let it fail or go broke. It will be backstopped one way or another. So I wouldn't worry about losing my money.

The only worry is the hassle of having to deal with the bank failure and getting at your money and getting it out. There could be a few days of illiquidity while the government is stepping in to sort things out. If that scares you or would be a big problem, then I'd find a safer choice.

I have two different thoughts on this subject.

To the average consumer, the financial health of a bank is completely irrelevant. The FDIC's job is to make it that way. Even if a bank does go under, the FDIC is very good at making sure there is little/no interruption in service. Usually, another bank just takes over the asset of the failing bank, and you don't even notice the difference. You might have a ~24 hour window where your local ATM doesn't work.

I also really question the "FDIC is broke" statement. The FDIC has access to additional funding beyond the Deposit Insurance Fund mentioned in your link. It also has the ability to borrow from the Treasury.

If you look into the FDIC's report a bit closer, the amount in the "Provision for Insurance Losses" is not just money spent on failing banks. It also includes money that has been set aside to cover anticipated failures and litigation. Saying the FDIC is "broke" is like saying I am "broke" because my checking account balance went down after I moved some money into a rainy-day fund.

Failure of the FDIC would signal a failure of our financial system and the government that backs it. If the FDIC fails, your petty checking account would be meaningless anyway. The important things would be non-perishable food, clean water, and guns/ammo.

That said, it will be interesting to see the latest quarterly report for the FDIC when it is released next week. The article implies things will look a little better for the FDIC, but we'll see.

I probably would not take it out, since I have enough layers of backstops:

Maybe if I could find a better rate. :)

The article you link scares me; but I still have faith that the FDIC will keep me protected. Personally, if the FDIC goes broke, there is something more fundamentally wrong with the government as a whole and dollars won't worry me much.

There are lots of issues with the FDIC, and I think the answers lie outside of simply printing more money and funding the FDIC further. There is likely more bad before this storm is over, and I might be ignorant, but I still want to operate normally.

Not the answer you're looking for? Browse other questions tagged banking current-events fdic or ask your own question.

7
How does the FDIC in the United States work?
4
I need a new bank! How do I determine the financial stability of a bank in the US?

6
Will I be able to identify the ATM surveillance footage from the bank where my money was stolen from?
0
How to withdraw money from an account with only an account number?
3
Can my bank (UK) take money from me that was received by Faster Payments?
1
Letting your bank withdraw money from your check for a bill?
2
Can you withdraw or transfer money from a prepaid debit card?
1
Why would a bank refuse TARP bailout money during the financial crisis?
34
How does a bank lend your money while you have constant access to it?