The Hunt brothers were worried about Nixon taking the US off the gold standard in 1971. They started to purchase silver as a hedge against the devaluing dollar. They had to purchase silver because it was not legal for Americans to own gold until 1975.

The two wealthy brothers began purchasing silver futures contracts on the commodity exchanges. The Hunt brothers took delivery of the silver at the expiration of the contract instead of rolling the contract over into a new contract. In 1974 they had managed to acquire around 55 million ounces of physical silver. They charted three 707 planes to transport 40 million ounces of silver from the US to Switzerland. 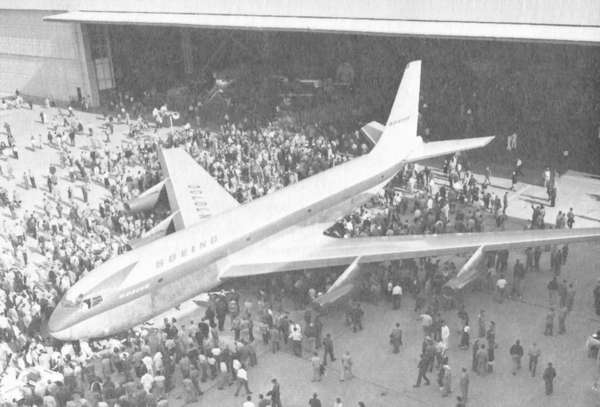 They continued to purchase silver contracts and taking delivery of the silver at the end of the contract. They were now borrowing money to purchase the contracts. By 1979 they had purchased 43 million ounces of silver through COMEX and CBOT – the two major commodity exchanges.

By 1980 they had 90 million ounces of silver in futures contracts. COMEX and CBOT started to restrict silver trading since it was widely believed the exchanges did not have all the silver to deliver to the Hunt brothers. First they raised margin requirements. Then they set limits with regard to the amount of silver contracts that could be held by any one investor.

Finally in January, 1980 the exchanges halted all trading of silver and forced contract holders to sell any contracts that were over the individual owner limit. The buyers knew the sellers were forced to sell so the price of silver came crashing down. The Hunt brothers declared bankruptcy since they could not cover the loans they used to purchase the silver.

Another major factor in the crash of gold and silver was Volker taking over as the Federal Reserve chairman. Volker raised interest rates substantially reducing the amount of leverage being used to speculate in the market. 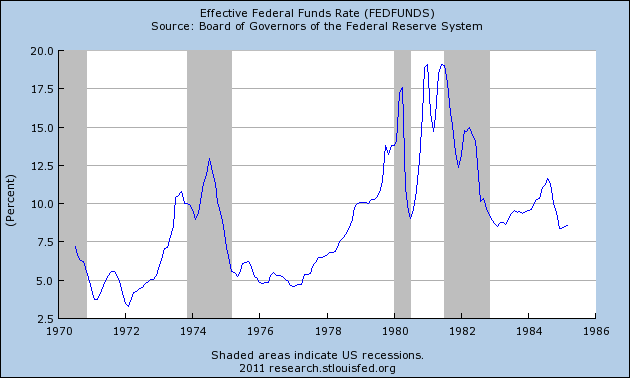 Much of the bubble back then was caused by the Hunt Brothers attempt at cornering the silver market. This was 30 years back and I'm answering from memory, but I recall these two Texas billionaires decided they would buy silver futures and keep taking delivery. Most futures contracts are settled in cash, only a small fraction results in taking the product. When a futures contract seller found the Hunts at the other end, they needed to buy spot silver to deliver the metal. This made silver run up to $50 or so at its peak. As the price rose and their effort to keep propping it up failed, the market collapsed. Again, as I recall, this was silver-centric, gold went along for the ride as part of the late 70's inflation run. The collapse of silver and end of the very high inflation popped the gold bubble as well.

What JoeTaxpayer talks about gives insight as to why. The rubber meets the road in the market, though.

The reason why gold prices went up so much in 1979-1980, in my opinion, was the Iranian hostage crisis. Inflation alone doesn't fully explain the sharp jump. A rise from say, $200 to $300 would have been more "in line."

The hostages came home in January, 1981 (I was waving a flag on Lower Broadway for them.) Problem solved, gold dropped in response.

This graph should help, considering what happened during the times of the last 3 spikes. 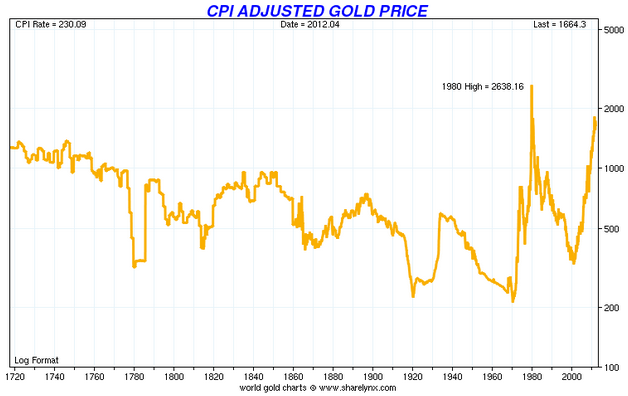 Not the answer you're looking for? Browse other questions tagged gold historical-data or ask your own question.

11
Is there a general guideline for what percentage of a portfolio should be in gold?

18
Relationship between silver and gold prices historically
5
How much would it cost me to buy one gold futures contract on Comex?
16
Where can I sell some gold ounce bars I own, without getting screwed?
7
When is a good time to invest in gold? In what situations is the price of gold likely to drop?
2
Why gold prices are affected by interest rates?
5
Gold drops on every piece of negative news from Europe/debt crisis, why?
3
How does spot-futures arbitrage work in the gold market?
2
Why is it 100 oz and not one ounce?