Every prediction is correct... at some point in the future. However, there are economical indicators that would be considered teaching points if a financial crisis were to occur at any point in the next two to five years: 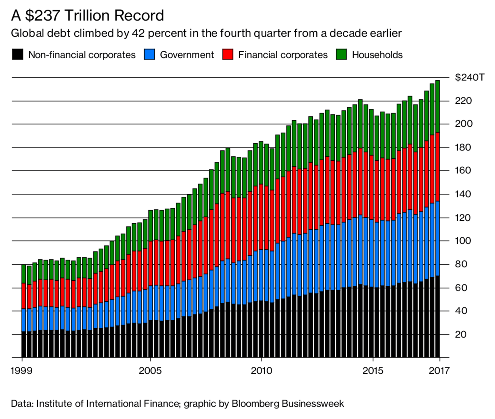 There is no need to invoke things like increase in margin trading, the long-running bull market, possible overheating of the housing market, or other random points to overfit the idea.

Is reducing exposure to bonds a good idea to hedge against (likely?) hikes in interest rates in the next few years? I see the economy healthy overall, with employment at near capacity, wages slowly inching higher, and personal consumption and indebtedness in better shape than in 2008, so holding passive mutual funds in stocks with broad exposure still seems like the wisest route. A minimal gold hedge is already factored in.

I know you can look into futures contracts, ETN with inverse returns to government debt, CDS or other financial alchemy, but I like it simple, and don't know much.

Reducing your investments in bonds would be reducing your exposure, not hedging it. Hedging an exposure is the act of taking positions which will benefit when this position is losing and vice versa.

Is reducing exposure to bonds a good idea to hedge against (likely?) hikes in interest rates in the next few years?

To answer your question, as said above this would not be a hedge so it can't be evaluated as a good or bad hedge. Let's play the game though, is it a good idea ? Well, it would be a good idea if you happen to be right. The problem is that we, mere mortals, are notably bad at predicting the future. Your analysis may be good (or not) but the results could be far from those you expect. The general advice given to neophytes, and also just to most people, is to diversify and not try to time the market (which is essentially what you are trying to do on the long term by adjusting your composition). I will assume that if you reduce your exposure to bonds, it would be in favour of stocks. If stocks nosedive and bonds do not, you just exposed yourself to a bigger loss.

Not the answer you're looking for? Browse other questions tagged bonds debt government-bonds hedging or ask your own question.