How to consider stock splits with respect to ETFs? Any different than for regular shares?

"Splits are used to increase the availability of shares on the market." I am unsure about this statement because you can increase the availability of shares through third-party funds like with Berkshire shares. Now, I am trying to understand what the splits are really used for but with ETFs. Personally, I feel splits are just annoyances to track the valuation of equity. Like did the EEM drop because of the split or because of the crash here?

iShares Emerging market fund here splitted just before the 2008 crash, I am wondering why because usually such actions are done to increase the availability of shares on the markets -- particularly to low-income people who are unable to buy very expensive shares.

"Splits are used to increase the availability of shares on the market" at an affordable price.

Also, when one sees a large number, one may doubt how much the share price could increase further; this is purely psychological, and the performance of a company is not dependent on it.

Your 'situation' above is contrived. It ends up presuming that the folks who made the decision to split would have been able to foresee the post split events coming. You are looking at something in hindsight and saying it doesn't make sense, but the decision to split far preceded the actual date of the split, and had no way to predict what would happen after the split.

To be fair in terms of a 'does it make sense? or 'wondering why' you need to look at the chart up to the day when the decision to split was made, and not include data after that point. If you want to ask 'why still go through with the split' then look perhaps up to the day of the split, and perhaps consider what market action might have happened between the date of the decision to split and the date it was executed. 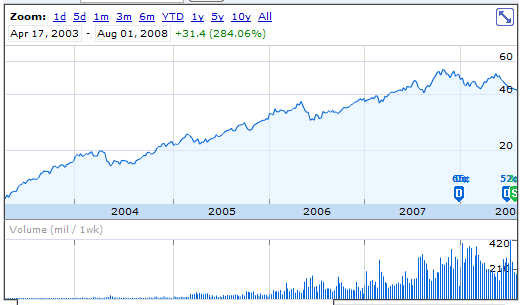 Now we are looking at something that has increased nearly 400% in price over a 5 year period, and appears to have a fairly stable price, especially if you consider that the start of the decision to split would typically have preceded the actual split by several months. That is the information available and the situation at the time prior to the split.

To consider anything that follows, is to presume that these folks had a crystal ball that would allow them to see what was coming. (and frankly if I had such, I'd be far more concerned with finding a way to short the market, than of I should still split my stock)

To really do a study of this you would need to look at more than a single stock, especially one that had a sharp decline in the latter portion of 2008 when pretty much everything tumbled and it would be difficult to prove any causality. In this case however, if we ignore for the moment that it is an index etf, and pretend it was just a normal stock, we can still attempt an answer by looking at the performance of the issue relative to an appropriate index of some sort. If we do that in this case, starting with the split and looking at the next two months or so, it looks like this. 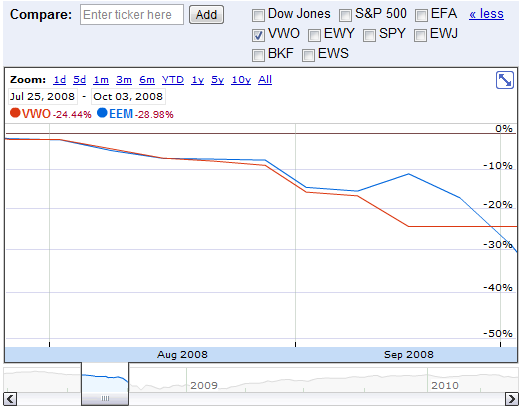 Which pretty much shows no deviation from the appropriate market as a whole, which would indicate the split had nothing to do with the price activity post split.

Now in the case of this particular issue, asking 'did the price go down because of the split' is really a pretty stupid question. In order to answer yes we have to presume that the splitting of an ETF on the US market, affected an entire foreign market index worth of stocks, which would be the ultimate case of the tail wagging the dog. That's because the item you selected is a ETF that represents an INDEX, and it's value is derived from all the stocks IN that index, and in this case we are talking about an Emerging Markets index, so the disconnection between the stocks in that index and the split of the ETF could not be more remote. I can't really conceive that the investors in a bunch of foreign markets were all monitoring the activities of an index etf on the american market, and reacting to it splitting.

I'm pretty much ignoring your sub-questions because firstly they were largely addressed by @Dheer, and secondly they don't make much sense at all when applied to an index ETF for which there is no way for the split to affect the price, and no incentive to 'increase gambling' or other ulterior motives etc

1
How to Compare Two ETFs, Accounting for Expense Ratio?
3
How to Compare Two ETFs, accounting for Dividends?
0
How much do laddered bond ETFs differ from bond ETFs that bound maturity?
3
Criteria for selecting Bond ETFs
3
Ishares Portfolios for EU investor
0
What happen to these S&P ETFs during 2016-2017?
7
Do physical ETFs possess the same problems as CDOs?
0
Why'd it cost too much to start Canadian-listed ETFs that directly hold developing markets' stocks?
1
How can I see splits relevant to an account, not just the parent transaction?