How to teach personal accounting to an 8-year-old

I try to teach my 8 year old daughter the basics of finance. She has some her own money (partly in a wallet, partly in a piggy-bank). Some time ago, she threw a short tantrum about "someone stealing her money". My wife's and my assumption is that she forgot spending some of her money. Still, the experience must have been difficult for her. Partly to avoid future incidents like that and partly to instill good habits in her, I'd like to teach her some (very basic) accounting. What is a good way for an 8yo to keep track of her money?

I don't want anything computer-based, since I think that the haptic feeling of "real" money (as opposed to virtual "money" in a bank) is important, and so may be a notebook (as opposed to a computer file).

I don't want to teach her full-blown double accounting (I use such accounting software to keep track of the household finance, but that might be too abstract for a child).

So, do you have any suggestions as to how technically an 8yo can keep track of her money, using pen and paper? She can read quite fluently, she understands decimal notation, although she can't yet perform addition (but this may be good opportunity to learn it).

If I were you I would simply use a check register, cash, and jars. Check register sheets can be printed online and increased to an appropriate size.

I really like Dave Ramsey's teaching on this. To me it is world class:

By doing these things you will give your child an amazing head start in life.

I've recently switched over to an allowance system that is attempting to teach my son the value of money, and more specifically, saving money to earn more money. It's a very exaggerated interest-based system, but for a 7 year old it so far seems to be doing the trick.

First, I don't pay him an allowance for doing specific chores. I personally think it sets precedent for teaching him that everything he does comes with a dollar value, and that's not how family/life works. He gets an allowance for simply being a contributing member of the family. He has chores, and we expect him to do them. If he fails to do them often or runs into a streak of not living up to his end of the bargain, then we'll worry about consequences on a case by case basis. But I know not every kid is the same, so this is tailored to his personality specifically, and so far that works.

Back to the allowance. The model is this:
- He earns a base allowance of $X/week
- For every $Y he has in his savings, he earns an extra $Z/week
- He can earn a maximum of $n/week

In this system, I also make him present to me his cash on allowance day. If he misplaced his money, then he won't earn interest on the missing money, only on the money he's shown me at the time of earning his allowance. This keeps him more aware of his money and he hopefully learns to keep it safe. While not necessarily accounting, it does force him to account for it physically once per week.

It's also worth noting that he has a head for math and we've been giving him an allowance since he's been 5, so he understands, at a very base level, the value of money. It also started as a flat value allowance. While compounding interest is still something he's wrapping his head around, he gets the concept: Save more money, earn more money. And that's what we're encouraging him to do. If he wants something very badly, he can spend all of his money, but as we've seen already, he'll pause to think about it as he weighs up whether or not the item he wants to buy is worth losing out on his investment earnings.

All of the values can be tweaked as he gets older, encouraging him to save more money so he can earn more per week, or by reducing the minimum value to prevent it from, being too harsh when he reaches a savings goal and buyers something he really values. But that's part of a conversation I want to have with him eventually once he realizes the problem. When he finally realizes a squeeze in part of the system, he'll hopefully come to me and negotiate a compromise, which will start teaching him more valuable life lessons when it comes to understanding his own contributing value.

Ultimately, the hope is for him to use this system to reach several money-related goals. Personal finance is part of the journey and makes him accountable with actual value. The logistics side of personal accounting is the easy part, the meaning and importance of it is what we want him to learn first. That, and that the value of a dollar isn't [only] measured by salary or an hourly rate, but what you do with the money you've saved by having it work for you.

Since she essentially only has a cash register, a simple cash journal should do the job.

Have her do weekly sums and compare with the contents of the piggy-bank.

If she forget to record some spending, she should notice there and still be able to remember. If not have her do daily sums.

Definitely a good time to teach her addition and subtraction. Set up a simple form you can print out whenever she needs a new page, and give her two copies one for her wallet and one for her piggy bank. It doesn't need more than four columns - date, reason for the change (earned by feeding dog, birthday money, spent on toys etc), amount of money (positive if received, negative if spent) and total. Start the first line of each for her, with a total of the current amount in the wallet (or bank).

Each time you give her money, help her record how much money and where it came from in the right list (eg wallet). To start with, she can count the amount now in the wallet and list that as the total, but use that to introduce her to addition and get her to start adding up on the sheet, then checking that with the count of how much is now in the wallet. Likewise, each time she spends something, help her record it and subtract it from her total. Make it a fun part of the spending experience ("Cool, you now have that candy/toy/whatever and we get to record the money") as something you and she do together to start with. Make sure to do it immediately on getting home, so there is a strong connection between spending and remembering to record it.

You can "practice" the addition and subtraction any time you like by having her transfer money from wallet to piggy bank & vice versa and helping her record it on both sheets. 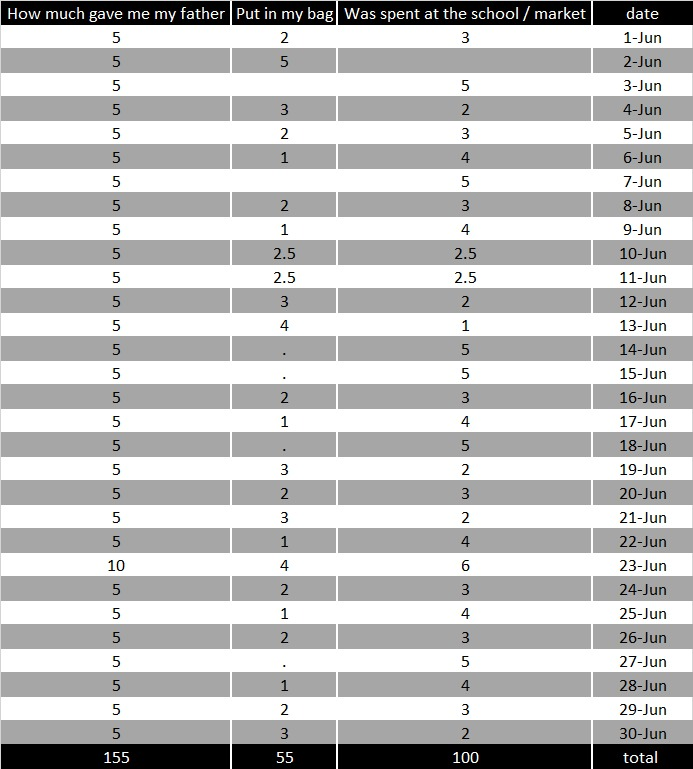 I suggest you design a paper like this which is only 4 digits First date The second is the amount that you gave it per day How much was spent today? How many put in the piggy bank today At the end of the month, you will find it easy to add the remaining amount in the box

Not the answer you're looking for? Browse other questions tagged accounting children or ask your own question.

9
How can my dad (grandpa) transfer shares to my 2 year old son?
3
How do I record monetary advances and money spent thereof in personal accounting?
2
Strategy for accounting personal finance in multiple currency?
3
How can I gift mutual funds to my 1 year old nephew?
31
What are the advantages of doing accounting on your personal finances?
3
How to give money to a 10 year old niece on joint business venture?
0
What is the correct accounting for purchases made on personal credit card?
1
How can I help a 17 year old track and pay me back a personal loan?