How does dividend work in an index fund?

Finally, how does an investor get dividends an index fund?

These questions for sure have a very simplistic answer but I am getting a bit confused.

They are distributed to investors much like any other mutual fund, same thing with capital gains, although those distributions tend to be lower in value.

Here is some info from the Fidelity S&P 500 fund: 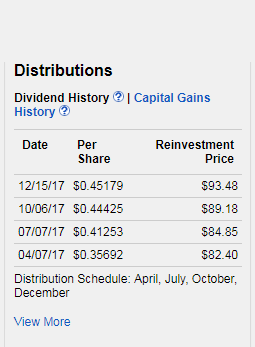 Note that you may not see the dividends in your cash account because they are typically reinvested. In Fidelity, the default is to reinvest dividends and capital gains, and you have to manually set the distributions to not reinvest if that is what you wish. Then they would appear in the cash part of your account.

No, that would be an actively managed fund, not an index fund.

The dividends would be invested like any other monies until it was time to disperse the dividends to fund holders.

Being an index fund the theory is that the dividends would be reinvested in the stocks of the index in the proportion the index dictates, to maintain the same rate of return as the index. Then when it is time to disperse the dividends to the fund holders, that would be done.

In practice index funds are not invested exactly in the index. Some of monies have to be on hand for redemption. And some funds use a sampling strategy instead of holding all the stocks in the index.

There are different types of stock indexes that deal with dividends differently. Index funds will also behave differently depending on which type of index they track, which is often indicated in the fund name by an abbreviation such as “TRN”.

The standard version of the S&P 500, e.g., is a price return (PR) index: It only takes into account the share prices, ignoring any dividends. That means that, typically, the index will fall slightly when one of its stocks pays a dividend. An index fund tracking the S&P 500 doesn’t need the dividends it receives in order to match the index, so it will forward them by paying a dividend itself. However, it is impractical for the fund to pay a dividend whenever one of the 500 stocks in the S&P 500 has done so; instead, it will keep the cash until some fixed day (e.g. each quarter) on which it distributes the money to the fund owners.

The other relevant type of index is the total return (TR) index. In it, any dividends are considered immediately reinvested. A fund tracking such a total return index will need to keep any dividends it has received or it will fall behind its index; therefore, it doesn’t pay dividends itself, and instead will use the cash to buy more stocks (according to the index weighting). From the point of view of the owner, the fund price will grow more rapidly than for an equivalent PR index fund.

Since funds typically won’t actually get the full dividend amount – a percentage is withheld as tax –, there is also the net total return (TRN) index, a variant of the TR index which only takes into account the after-tax dividend amount.

Almost all indexes exist in multiple variants. However, which variant is considered “the index” may differ between indexes. Traditionally, “the S&P 500” is the PR variant; on the other hand, “the MSCI World” normally will refer to the TRN version.

In practice, the difference between index funds with and without dividends will often not matter that much. In many cases, investment companies will provide automated reinvestment of dividends: Whenever a fund pays a dividend, they will automatically use this money to buy new shares in the fund. This happens on a different level, though, outside of the fund.

Not the answer you're looking for? Browse other questions tagged investing dividends index-fund or ask your own question.

5
How are Vanguard's ETF's returns higher than the index's growth?