Is an historic bull market a bad time to begin investing for the first time in life?

I have disposable income for the first time in life. Should I sit on the cash until after a correction, or invest in stock funds that are all more or less at historic highs?

Edit: These are not retirement funds I am speaking of. That is taken care of separately with no regard to short term trends.

My snarky comment aside, there are many articles and studies that indicate that timing the market (waiting until a "correction") is not a good strategy. In fact, I cannot find a single one that claims that timing the market is a viable strategy (there are tons of Chicken Littles that push you to get out and invest in something "safer", like gold, but that's almost a constant and has nothing to do with the current market)

The problem is that you don't know when the market has reached its peak. Yes it's gone up and is at another all-time high, but it's also been climbing above its pre-2008 high for the last 5 years.

In general, if you are investing for the short term and can't afford to lose, then equities are probably not best for you. You need something safer that will not crash (or at least something that won't crash as much, like bonds). If you are investing for longer periods (5, 10, 20 years) then at worst you might go through another correction and could have done better, but in the meantime you might also miss out on significant gains between now and then.

Another strategy is to diversify and rebalance periodically (e.g. quarterly). Buy a mix of classes (large-cap/small-cap/international/bond) and rebalance to keep a relatively consistent mix. The benefit here is you sell off some assets that have gains and buy some that might be lower, keeping the "buy low, sell high" mantra in effect). pro

Timing the market? No one can predict when a market will crash or correct significantly. A wiser approach is to recognize that severe market downturns such as 1987, the 2000 Dotcom Bust, and the 2008 subprime melt down did not happen overnight and they didn't happen in a vacuum.

For those who aren't oblivious at some point over the course of an 18 MONTH drop it becomes apparent that metrics were deteriorating - economic indicators turned down, earnings announcement disappointments increased, analyst downgrades and earnings revisions increased, the VIX increased, all beginning long before the crisis became acute. React, don’t predict.

You'll have losses but they won't be 50% of your portfolio's value. Transitioning to cash or quality debt is something that any experienced investor can achieve. If god forbid one takes off the 'long only' tunnel vision blinders, one can even go short a small position and transition to more short positions as the market drops further. Let your portfolio’s declining value dictate the transition from long to short (and vice versa).

If we're headed for a correction, this is the best time to start.

Every investor is likely to make an emotional error at some point. Proactively make lemonade out of lemons, and when you invest, take stock of your feelings at the time you make a decision. More concretely, consider your positions and physically write yourself notes periodically about why you choose to buy, sell, or hold, and what you think will happen to the position in a target time horizon. Go back and read these after the time passes. Don't let yourself dwell on the one win among 10 stinker trades. Did you ever panic based on news, or misread the market? What did you do and why?

If it turns out you're seriously wrong some time, and you miss on a 50% gain or have a 50% loss, that "tuition" is on what you've started with - let's say 1 month salary? That's a whole lot less costly than when you reach the point in your 40s when they say you should have 5x your salary in your retirement account.

Yes, it is a bad time because we are in the end (when exactly? nobody knows) of the 10 year cycle. So it wouldn't be smart to buy the index ( ETF).

No, it is not a bad time because there are always cheap stock, et some sector such as bio are less big trend driven and more new patent driven.

Tip : if you are new to stock market, only invest 1000$ in 5 stock for 6month to 1 year and make a trade a lest 3 times a month. You will learn a lot and can avoid big loss of an heavy first investement.

Now is still a good time to invest as the US market is in a strong uptrend. The market will continue to uptrend until it stops up-trending, and you should always keep investing until the market stops up-trending. The trend is your friend.

So how do you know when the uptrend is over. Well to know that you need to know what the definitions of an uptrend, and of a downtrend for that mater, are, and when these trends come to an end.

An uptrend is defined as a Higher High in price followed by a Higher Low in price. An uptrend comes to an end when there is a Lower High confirmed by a Lower Low or a Lower Low confirmed by a Lower High. Once an uptrend is over you should get out of the market (and possibly look for opportunities to short the market if you are experienced in doing so and if a new downtrend commences). 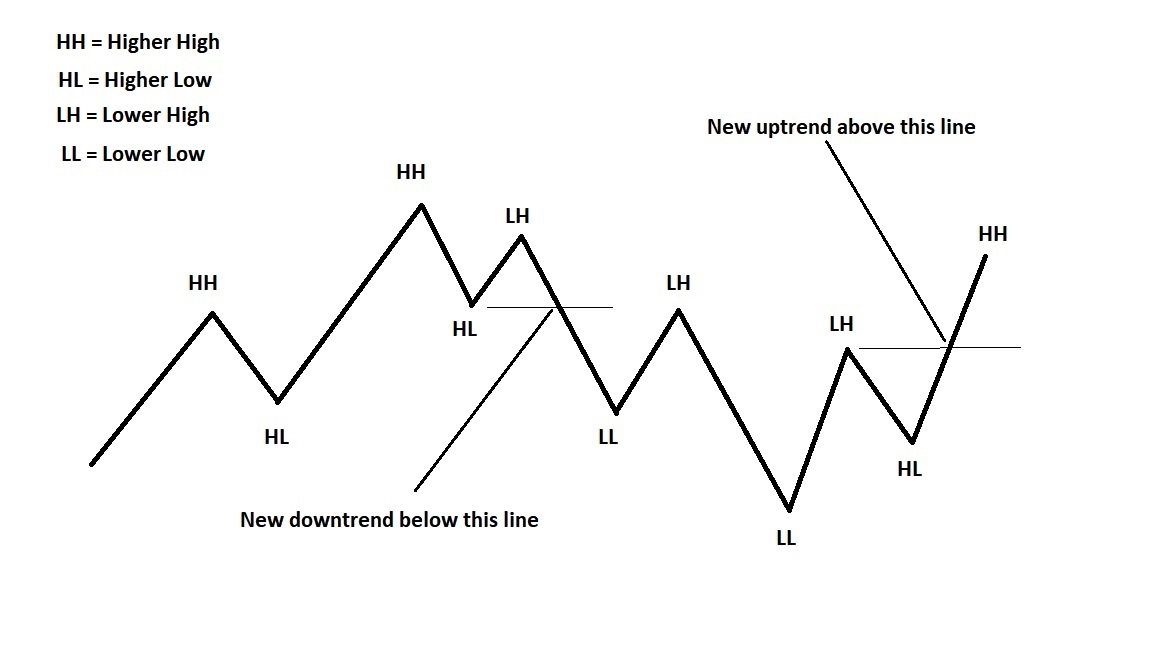 Whenever you are looking for a change in trend you should always look for confirmation before taking action. And just because one trend ends does not mean the reverse trend will commence, sometime the market can trade sideways for long period.

I have included an example below with a 15 years weekly chart of the S&P500 (Log scale).

Not the answer you're looking for? Browse other questions tagged stocks investing or ask your own question.

33
We're in an asset bubble currently, what can I do about it?

12
What are some well known or well regarded arguments against investing?
4
Are mutual funds a good choice for a medium to low risk investment with a two year horizon?
2
First 401K portfolio with high expense ratios - which funds to pick? (24yo)
6
Does it make sense to compare the "returns" from debt payoff with long-term stock market investment returns?
6
Things to do with investments before moving to the US
5
Can I trade the death benefit for more cash value in a whole life insurance policy?
49
Why are low risk investments so strongly advised for first-time investors?