The proper term for a third party economy [closed]

Ask Question
Asked 4 years, 9 months ago
Modified 3 years, 11 months ago
Viewed 944 times
7
Closed. This question is off-topic. It is not currently accepting answers.

Questions on economics are off-topic unless they relate directly to personal finance.

A friend of mine asked me whether something odd was going on, including the following picture: 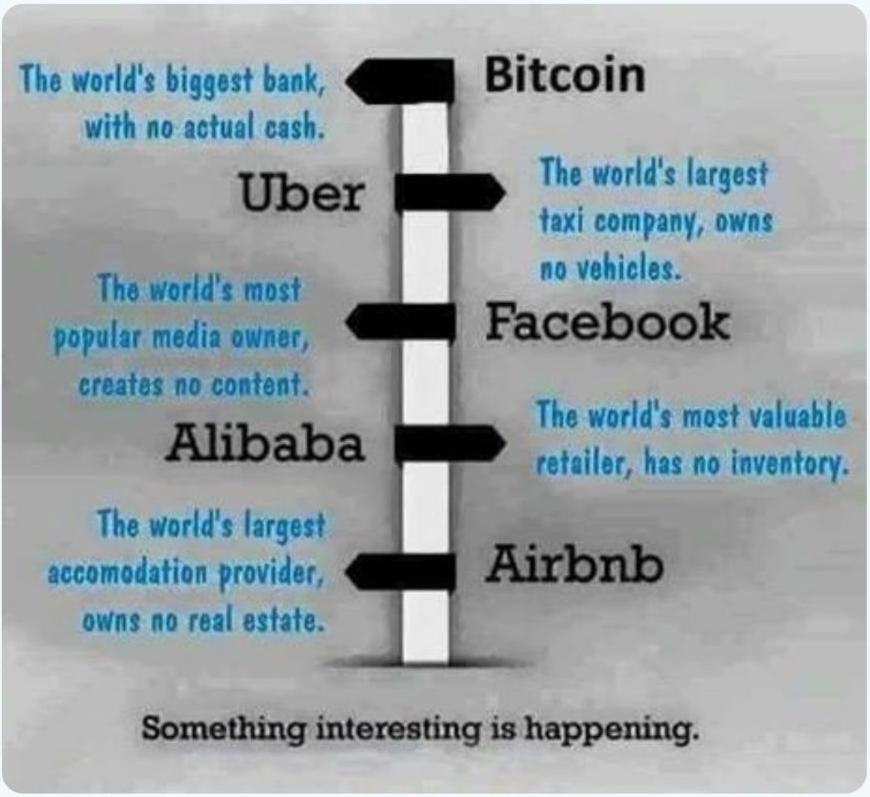 Basically, the companies listed (Bitcoin, Uber, Facebook, Alibaba and Airbnb) sell a service in a market where usually inventory is required. Whether it's cash, vehicles, content, inventory or real estate, usually those companies have something and sell/rent it. The companies listed are (among) the biggest in their sector and only act as a third party.

What is the term for such constructs?

Best I could think of was a "third party economy", a modern version of service suppliers. It's taking being an intermediary to the next level. But I'm sure there's an actual term for both the economy going this way and the companies carrying it. I suspect even those words being highly related, thus asking this in one question.

Feel free to point out I'm completely on the wrong track if that's the case.

Uber, FB and Airbnb are facilitators, since they, well, facilitate connections between the consumer and the provider.

Alibaba and Amazon are in that role, too.

Agents or brokers. Bitcoin is an outlier (and I don't know if I'd agree with the cartoon text for it in any case), but the others listed are like travel agents or concierges, or consignment sellers, who also don't have inventory, and don't have demand until a customer reaches out to them, and their work is to match a specific customer to one of several candidate suppliers.

What's novel about them is that the "supplier" isn't necessarily a corporation, but often a natural person supplying the asset that may be personal property or personally generated that the customer uses (broadly increasing the supply, as well as making the supply over time much more volatile); and the matching uses computer technology to replace older models of agent labor. Facebook gets paid by advertising, and "pays" the supplier with a currency of certain personal value (likes, shares) that engages dopamine centers in the brain; in the other cases, the agent scrapes their pay out of a cash flow from the customer to the supplier.

Most people refer to such models as a "sharing economy." Essentially, these are characterized by increased connections between asset owners and asset users.

1
Does a growing economy mean the economy is becoming less efficient?
2
Banking: What does the term "Sales Frontend" mean?
0
What is the term for a shared budget?
6
What's the proper way to calculate ROI per year given the ROI for a period of time?
5
Proper term for amount + currency
1
Understanding the term "open position"