Last Saturday at around 20:00 CST I tried to pay for an item on eBay by using PayPal as a payment method - which I have already used before without any problems, however it failed with a message saying something along the lines of:

Your payment could not be processed, please choose another method or try again later

I then waited about a minute and tried again with the same result, the payment was rejected and I got the same message on top. I waited another 40 minutes and tried again but by using my debit card directly and it failed but this time it only said to try again later. I started wondering if I just didn't have enough funds so I checked with my bank's app and to my surprise I had 3 withdrawals listed on recent transactions:

I was worried so I went straight to my PayPal's account transaction history and indeed found 2 rejected fund withdrawal transactions from my account for the same amount of those listed in my bank's app, at around the same time and hours (I didn't find the $1 USD one, but I presume it being like a one-time payment prevents it from reflecting on my PayPal account, despite using the same debit card info).

So what exactly is happening here? Why do I see 2 withdrawals when PayPal says such transactions were rejected? Have I just lost $200?

Some additional information which I presume is relevant: The product in question was a laptop that was being sold for just about $100 (most likely because of an error I know that kind of notebooks are around $1000 normally, item here - the link is dead, by the way). The product was in EUR and I was trying to pay in MXN (I know PayPal automatically does the necessary transactions to convert the currency, but it didn't even reach that step, as far as my transaction history tells).

I have $0 in PayPal credit, in case someone wonders: 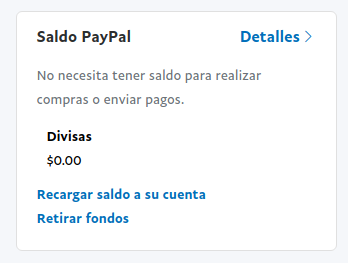 Also, this is what the transaction history says about those 2 withdrawals:

In the meantime, most banks will credit outgoing transfers immediately but process later, and only debit incoming after it passes through a processing team. So while the money will go out right away it may take a few days for your bank to actually process the withdrawal and the subsequent reversal from Paypal. In reality Paypal doesn't usually recieve the money immediately either, but they extend you credit to speed up things.

Either way, it doesn't hurt to contact Paypal to make sure they have reverted the amount to your bank, and if they confirm such you can also reach out to your bank and ask where the money is stuck. Usually delays like this will happen in the interface between two unrelated financial institutions.

Not the answer you're looking for? Browse other questions tagged international paypal withdrawal or ask your own question.

16
PayPal wants me to "add a bank account", another funding source. Credit card isn't working. Why?
2
Debit card funds on preauthorization hold to paypal: can it be used for another transaction?
2
Can customs access PayPal payment data
25
If I switch jobs to a lower tax bracket right before I retire, do I save on 401k taxes?
2
Is savings account limit on number of transactions both per calendar month and per bill cycle?
52
How can I deal with what I think is an eBay scam?
30
Paid a scammer money via PayPal. What can I do?
2
A stranger requests to buy eBay item in installments