Does participating in a work 401k increase my take home from a Traditional IRA account?

I am checking out a Traditional IRA calculator and it seems that if I check that I have an Employer Plan (I do have a 401k plan), my after Tax return is 272k. If I uncheck that box, the number goes down to 252k.

What relevance does having an employer plan have on my personal traditional IRA account? 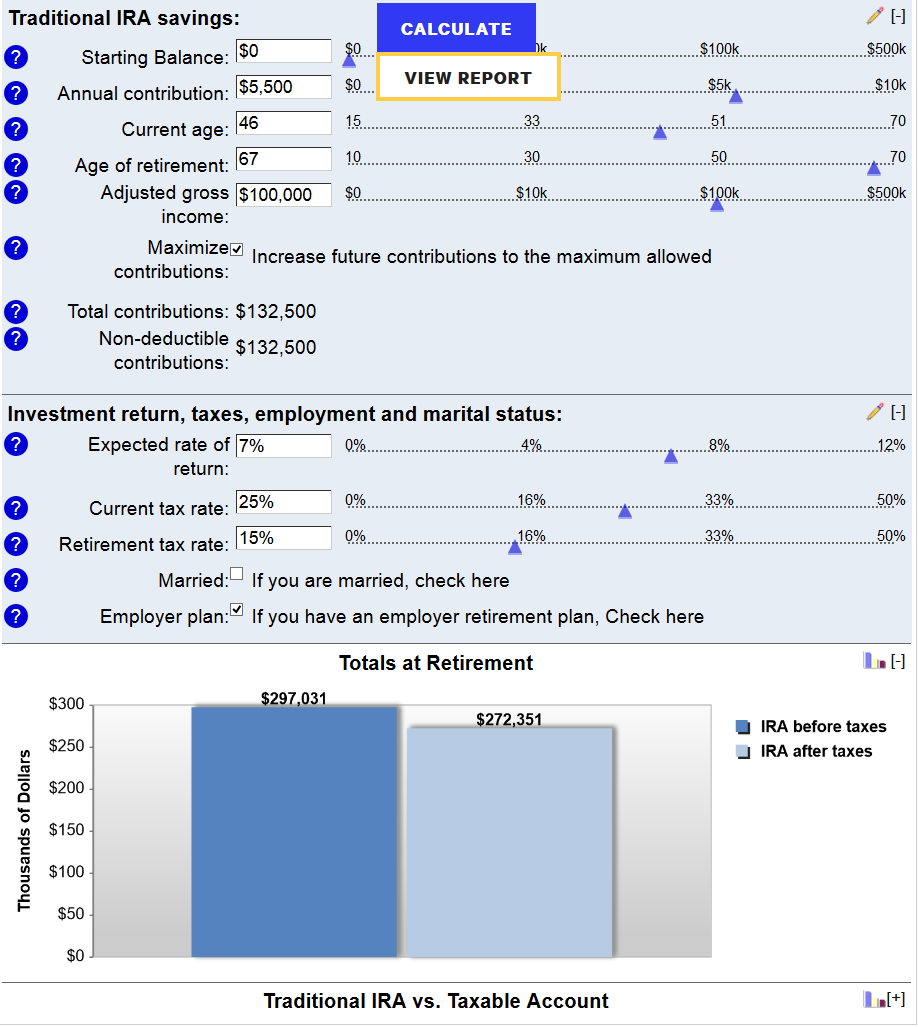 Summary: It's because you are effectively contributing more money in the second case, so you have more money at the end.

The effect of being covered by an employer retirement plan (in the case of a 401(k), that means either you or your employer contributed to it during the year) is that it prevents you from deducting Traditional IRA contributions unless your income is below a very low level (for Single filing status, it phases out at an MAGI of between $62k and $72k).

$1 of pre-tax money is not the same as $1 of after-tax money. If your marginal tax rate is 25%, then $1 of pre-tax money is equivalent to $0.75 of after-tax money. However, since in both cases you are putting in the same nominal amount of contribution ($5500), but one is pre-tax and one is after-tax, in the after-tax case you are effectively contributing more money, i.e. more money is taken out from your bank account that year. The $5500 pre-tax contribution is equivalent to only $5500 * 0.75 = $4125 after-tax, i.e. you are only short $4125 from your bank account at the end of the year after making a $5500 deductible contribution, whereas you are short $5500 after making a $5500 non-deductible contribution, so it's not a fair comparison.

This is used to determine if you can deduct your annual contributions from your taxes. For more information on how an employer plan can affect your IRA tax deduction, see the definition for non-deductible contributions.

So, we look there:

Not the answer you're looking for? Browse other questions tagged united-states 401k ira retirement or ask your own question.

6
Can excess 401K contributions returned with 1099-R be rolled over to a Traditional IRA?
8
I have access to a 401K at work but the fees are high. Should I contribute, or do otherwise?
5
Is there any reason at all to have a traditional IRA if you already have a 401k and earn more than a certain amount?
9
Rolling over a mixed 401k (Traditional and Roth) to a Roth IRA
0
401k Rollover into IRA (First Time Home Buyer)?
2
US Taxes & Eligibility for a traditional IRA: No 401k from Employer so far in 2017. But might have one later this year.
0
401k Taxes (USA) — Traditional vs Roth (not IRA)
0
Contributing to IRA account which contains pre-tax income from my rollover 401(k)