Bond ETFs usually make monthly dividend payments. The ETF manager receives quarterly or semiannual coupons on the underlying bonds in the ETF. What is the time delay between the coupons received and the monthly dividends? 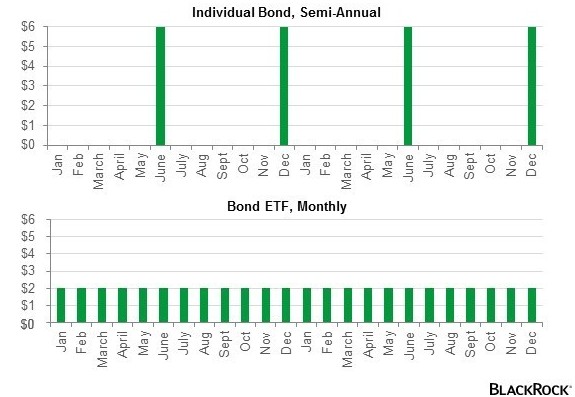 Would really appreciate a source with your answer. If it helps, I'm focused on the HYG ETF.

It's not clear because the prospectus does not specify exactly how the dividend is calculated, only that it will distribute the income periodically.

The ETF will make monthly dividend payments that are not necessarily a direct reflection of the interest received in the past month (or any other period). The dividend may be more or less than the actual interest received from the bonds, but the total paid for any given year should reflect the interest paid for the year (but even that is not specified in the prospectus; although any interest "kept" by the fund should be reflected in the overall value).

This fund makes two types of distributions: distributions of "net investment income" (interest) at least once a year, and distribution of "net realizes gains" (increases in bond values) annually.

Dividends from net investment income, if any, generally are declared and paid at least once a year by the Fund. Distributions of net realized securities gains, if any, generally are declared and paid once a year, but the Trust may make distributions on a more frequent basis for the Fund. The Trust reserves the right to declare special distributions if, in its reasonable discretion, such action is necessary or advisable to preserve its status as a regulated investment company or to avoid imposition of income or excise taxes on undistributed income or realized gains

Put another way, the dividends paid are not "pass-through" payments of the underlying interest received. It's a periodic (roughly consistent) payment. Just because the ETF receives X in interest in January does not mean that all of that interest will be paid ad the next dividend date. It will pay some percentage of its value (to make dividend yield stable) - it may pay more or less than X.

So no, you can't add up all of the interest payment of the underlying bonds to calculate how much the next dividend will be. It will likely be the same (in percentage terms) that the last dividend was.

Not the answer you're looking for? Browse other questions tagged etf bonds fixed-income or ask your own question.

7
What types of ETFs are taxed differently by the IRS?
1
How do leveraged ETFs (index tracking) set intraday pricing?
0
Estimating monthly contributions required to save up to a sum within a year using index funds and bond funds
3
Pros and cons of bond ETF versus traditional bond mutual fund?
0
Which field should I use for getting the income yield of this bond ETF?
3
Bond ETF NAV before dividends
4
High Interest Savings Account vs Bond ETF
1
Why invest in bond ETF if its trading value decreases?
0
how to estimate bond ETF price once interest rate changes?
16
Are ETF trackers fundamentally better than individual stocks?