There have been many studies on the differences in earning-power between men and women. Have similar studies been done for race, religion or sexual orientation?

I'm curious to know if there are similar biases in the workplace - if anyone's dared to document it.

There is data in the Wikipedia article Personal Income in The United States which I believe addresses your question. The results are not a surprise to me. 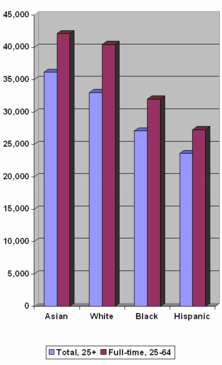 As I reviewed this, I see the data is a bit old, 2006 for this chart. I don't think the numbers have changed much, though.

There is a quite an extensive literature on the racial/ethnic and gender differences in earnings in the US and elsewhere. There is comparatively less of this work done on earnings differences in sexual orientation, but starting with a great paper from 2001 that relied on a novel use of census data from the 2000 US Census, it was shown that gay men earn roughly 16% less then straight men. Unfortunately you need access to JStor to read it online but here's the link:

For more on gender, race, ethnicity, and sexual orientation, search the labor econ literature on http://econpapers.repec.org or http://scholar.google.com. You can also hit the BLS site for tables of wages and other labor market gaps by demographics from the Current Population Survey at http://bls.gov/cps/earnings.htm#demographics

Not the answer you're looking for? Browse other questions tagged employment income or ask your own question.

13
I'm currently unemployed and have been offered a contract position. Do I need to incorporate myself? How do I do it?
15
What ways are there for us to earn a little extra side money?
9
How do I adjust to a new social class?
19
As an employee, when is it inappropriate to request to see your young/startup company's financial statements?
3
How are RSU's factored into Income during loan qualification?
10
In what ways can a public company ask for money?
4
Is a “primary residence” the place where you live most of the time?
0
Funds : Distribution Types
2
What is the CRA definition of income? Why not any payment counts as income?