How to calculate APR for a fixed rate loan due before amortization end date?

I need help with the following question for a homework assignment related to finding the APR for an investment class. Here's the question:

Calculate the APR for a $500000 fixed rate loan amortized over 30 years but is due in 10 years if the stated annual interest rate is 5% and the lending charges 2% as an origination fee, $18 for a credit report and $500 for an appraisal?

I used a calculator I found online and plugged in the given information, but I am couple decimals off. I know that appraisal fees and credit card information is not factored when we calculate APR, so I am lost as to why I am getting 5.431% instead of 5.29%? 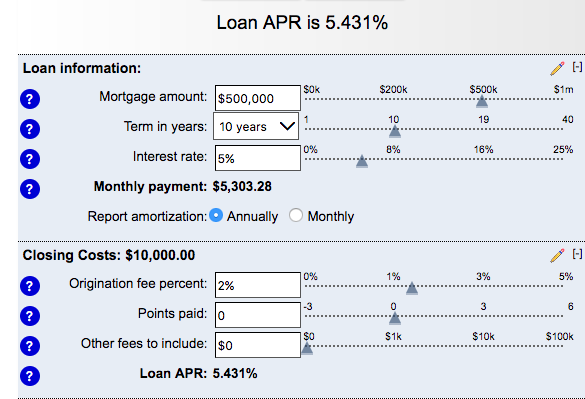 It looks like the credit report and appraisal fees are factored in.

Also the 5% appears to be an effective annual rate or equivalently, a nominal APR compounded annually.

The calculation notes below find the APR = 5.29% as required.

The payments for a 30 year term are calculated, but the balance is paid in a balloon payment after 10 years. Then the APR for $500000 is calculated. 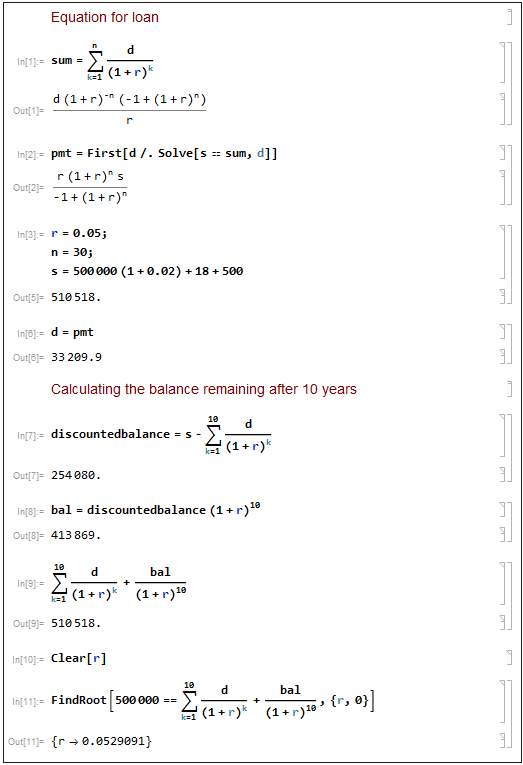 The webpage has calculated the APR somewhat differently, as shown below. (The webpage explains the steps: click on View Report.)

The 5% APR is taken as a nominal rate, compounded monthly.

Most significantly, the webpage does not include a calculation for balloon payments. 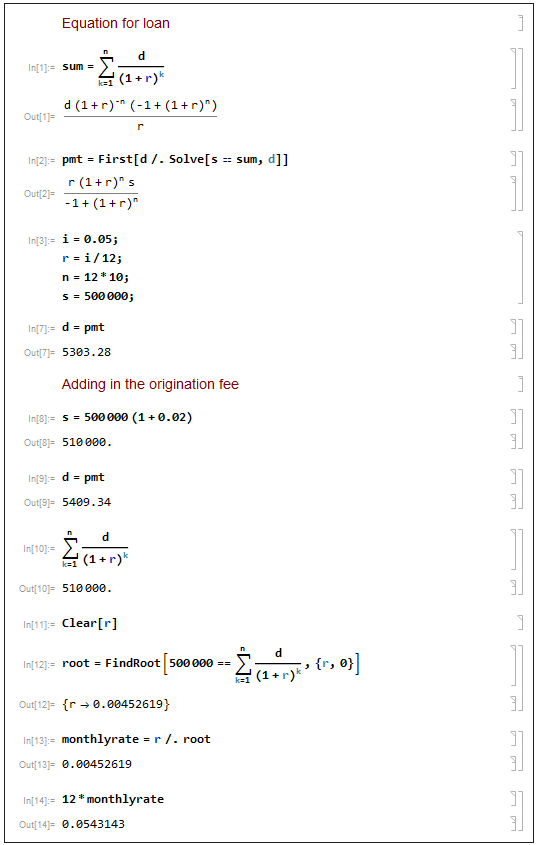 Simply presenting a calculator's answer presents a difficulty, in that we don't know what code is being used. If the calculation is being done client-side and you have enough tech savvy to see what the code is, that would help.

But the main issue is how this 30/10 year matter affects the answer. To simplify it a bit, the 2% origination fee translates to $10,000. That $10,000 is then spread out among the interest payments, and the effective interest rate is calculated according to how that $10,000 increases the total money paid, relative to the interest paid. The more interest is paid, the more the $10,000 gets "diluted"; if you were only paying $10,000 in interest, then a $10,000 origination fee would be a drastic increase in the money paid, and so the effective interest would be drastically increased. In $1,000,000 in interest were paid, then the $10,000 would be a tiny amount, relatively speaking, and so would not have a very large effect on the effective interest rate.

So how does the term length affect the interest paid? Well, a 10 year amortization period means that each payment is enough to not only pay the interest, but pay down the principle so that after 10 years, there is no more debt outstanding. A 30 year amortization period, on the other hand, means that the payments are enough to pay it off after 30 years. This means that the payments will be lower, and at each period in the next 10 years, the 30 year mortgage will have a higher outstanding balance than the 10 year one. After 10 years, the 10 year mortgage will be at zero, but the 30 year one will still have 20 years of payments left.

Not the answer you're looking for? Browse other questions tagged mortgage calculation apr amortization or ask your own question.

1
Calculate APR for under 1 year loan
4
How to determine the interest rate?
0
How much higher should my APR be than my rate?
4
What is a 10 Year Treasury Note and How Can it be Used to Calculate the Intrinsic Value of a Stock?
1
How does one compare repayment of a loan based on a fixed payment of some dollar per $1000 borrowed?
3
Effective Interest Rate from bifurcated interest rate
1
Calculate APR from balloon loan
2
How does Sallie Mae calculate its payment?
3
How is mortgage in Canada calculated?
0
Refinance Calculator - use Interest Rate or APR?