How do Wealthy people deal with tax? [closed]

Want to improve this question? Update the question so it focuses on one problem only by editing this post.

Personally I will start full time work very soon and I was just looking into how much I could potentially take home. It seems like the harder you work the more that gets taken. So I decided to type in an annual salary of £1,000,000 into an online calculator and the taxation is huge at nearly 50%. Here is a screen shot of balance sheet: 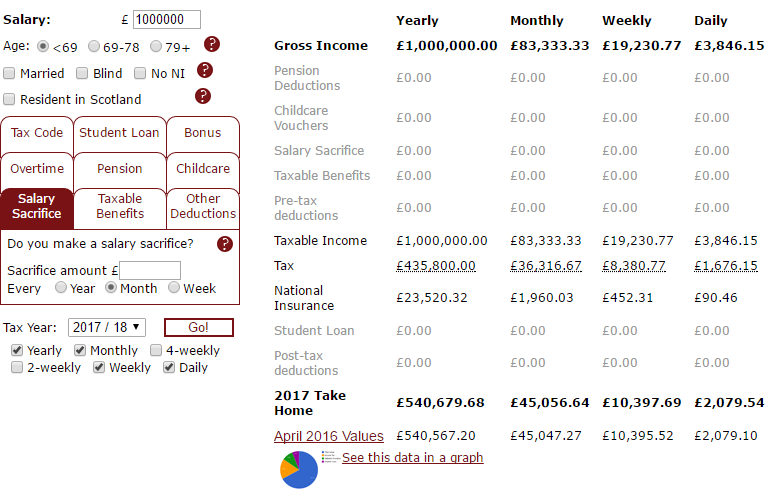 This got me thinking, surely wealthy people have ways around this, to avoid excessive Taxation.

How do they get around this?

There is even more than you may realize. The salary one receives is also reduced by the amount the employer must pay the government. Here in the US the employer pays social security and other payroll taxes on behalf of them employee without the employee ever seeing them in his check. They amount to over 10% of a workers salary, even for low income workers. Presumably the employer could afford to pay each and every employee 10% more if it were not for these taxes.

The one tax loophole just about everyone should take advantage of is retirement savings. I believe they are called PPP in the UK, or a 401K/403B/IRA here in the states. Here in the US there are income restrictions so for the truly high wage earners this becomes less and less of a break.

Other tax loop holes vary by time, income, and jurisdiction. There is a constant battle by legislatures to close any perceived loopholes and they have been pretty darn successful. One high income person's strategy for dealing with taxes, that I read on Boggleheads, was simply "Suck it up buttercup".

The other thing to note is that wealth is not directly correlated with income. There are lowish income people who live frugally and purchase assets with a decent portion of their income. While it is much harder for them to become wealthy, some are able to outperform higher earning counterparts because they shun excessive consumption. Owning assets is what makes one wealthy, not income.

Here in the US cars a big barrier to building wealth. A person can look wealthy by driving a nice car, but their balance sheet suffers devastating hits. The same could be said of electronics such as phones and computers.

Again laws vary, but currently in the US dividends are maxed at a rate of 15% and some argue that "this is a tax break for the rich only". However, many companies make it very easy to purchase their stocks and receive the benefits of dividends. Rather then entering into a raging political debate, this is one way to avoid some tax, but laws can change at any time.

Not the answer you're looking for? Browse other questions tagged taxes accounting financing or ask your own question.

4
How to deal with VAT when traveling from US to Europe?
6
How to deal with taxable income from discharge of student loan?
0
Deal with stock PSEC
10
How is Social Security tax levied for people with incomes above the cutoff?
1
How does IRS deal with 1099s across accounting methods?
4
How should I deal with over-contributing to a Roth IRA?
6
Filing world-income for taxation in UK as a non-citizen
1
How much is the tax for buyer and seller in land deal
4
How to deal with discount when invoice has multiple line items and multiple tax rates?