What is the average long-term annualized return on investments?

I've heard the number 7% thrown around a bunch of times, but I am struggling to find reputable data to back it up.

All I found was a quote from Warren Buffet that I couldn't find an original source for and data assembled by individuals on their personal websites. Is there something from an organization such as Market Watch making a statement about this?

I'm hoping to specifically find what the 10 or 20 year return is for investing in the S&P 500 index fund or another diversified portfolio option.

The oddly named MoneyChimp offers a great look at the numbers for the S&P. 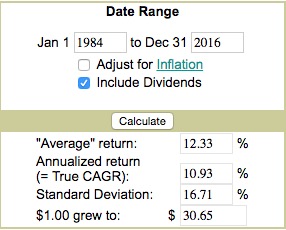 I have recently written a blog post analyzing the historical annualized returns with the S&P 500 all the way from 1928 - 2018. You can check it out here - https://finsers.com/index.php/2019/02/28/long-term-returns-of-the-sp-500/. My analysis shows that the annualized returns one has enjoyed has varied significantly based on the time in history they were investing in - even when annualized over long periods of time such as 30 years! The extent of variation blew my mind away, really.

The median annualized returns were 7%. However, if one were to plan their finances and financial goals assuming a 7% return from the market, they would miss their goal 50% of the times. Many a time they would miss it by a big margin!

First, your question is what a mathematician would call "ill-posed." Second, it doesn't matter unless it is for historical curiosity since you should be concerned with future returns rather than historical ones.

It is ill-posed because investments include land, where returns are locally determined rather than nationally or internationally, and private investments alongside public ones. Second, returns would be gross of taxes. If people are intelligent, then they choose their investments, in part, based on their tax situation and so many investments would be irrelevant to you as their after-tax return for you would be poor, but good for someone else.

On the flip side, returns are a function of interest rates and price to income. Interest rates are near enough to historic lows that non-bond investments can pay ridiculously low returns and be competitive. That was not the case across history. For example, you could purchase 18% per year bonds in the '70s and '80s. As a result, equity securities were discounted way way way below that level.

The starting point matters. Had you invested in the Dow on January 1, 1929, reinvesting dividends, and a friend invested in 90 day bills on the same date, it would have taken until 1964 for you to break even with your friend. Within three years you would have shot past him or her by a huge amount, but you would have been worse off in the interim.

Based on the current price to earnings ratio, for US stocks, as well as the dividend yield, and reasonable inflation expectations, my highly educated guess, based on decades of statistical research on the topic by me, is that forward returns before taxes will be six percent, or in that neighborhood.

The personal finance pages do not allow for mathematical notation, so there isn't a simple way to justify it.

Bonds rates could very well be representative of long term bond rates, but my guess is that rates will rise due to serious missteps being made by the Congress and the current president. If you are looking at real property investments, look at the purchase price to rental price ratio. Pittsburgh is among the best values and San Francisco among the worst. Price to income is what matters, and a lot of value gets sunk in land in the US.

The question should be what return should I make from a particular price to income stream. The answer to that is to use standard time value of money discounting methods.

Not the answer you're looking for? Browse other questions tagged united-states stocks investing index-fund or ask your own question.

2
Average performance for long term stock investors?
-4
Do I need to invest to become millionaire?