I owned 136 shares of Johnson Controls (JCI) before its merger with Tyco (TYC) and later spinoff of Adient (ADNT). After the Tyco merger I received 113 shares of the new JCI along with cash-in-lieu, and I am trying to figure out the tax consequences.

Usually when there is a merger or a spinoff of a public company, the parent company posts guidance on their investor relations webpage (things like "38.5678% of cost basis is apportioned to company Y") but in this case JCI does not seem to be helpful.

How can I figure this stuff out? I found this page at Schwab (not my broker):

(screen shot of one excerpt below) but I don't know how to interpret it, and how could I verify the information it contains from SEC filings? 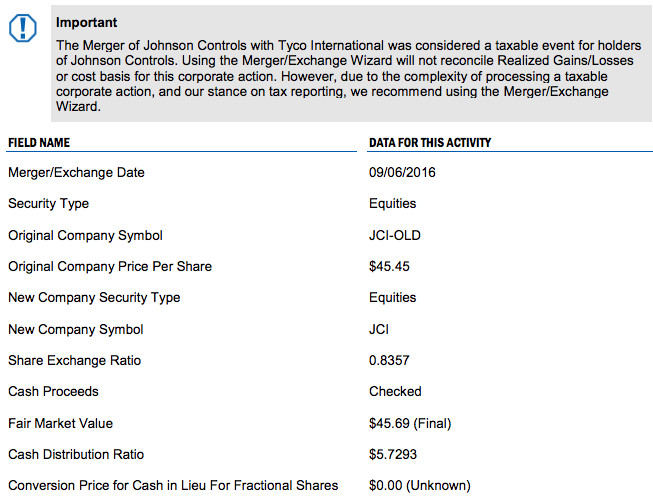 For purposes of determining each former JCI shareholder’s pro rata share of the Tyco ordinary shares received as merger consideration, the total number of such shares received by all former JCI shareholders was 527,445,124, excluding fractional shares. U.S. federal income tax law does not specifically prescribe how to determine the fair market value of the Tyco ordinary shares received as merger consideration for purposes of withholding, or calculating gain or basis. There are several possible methods for determining such fair market value. One possible method may be to utilize the average of the highest and lowest prices on the New York Stock Exchange for shares of Tyco stock on September 2, 2016, yielding a value of $45.69 per share. You should consult your tax advisor to determine what measure of fair market value is appropriate.

The "share exchange ratio" on Schwab website of 0.8357 seems correct; my brokerage statement reported I got 113 shares + cash-in-lieu for 0.655 shares.

I finally found it!

This answers what actually happened in the transaction; as far as my cost basis in the new JCI, it's a little more obscure; on page II-7 it says:

For pro forma purposes, the valuation of consideration transferred is based on, amongst other things, the adjusted share price of Johnson Controls on September 2, 2016 of $47.67 per share

and both agree with the information posted at http://www.secinfo.com/dpdtb.w6n.2n.htm#1stPage (R66 Merger Transaction Fair Value of Consideration Transferred (Details)) which I can't seem to find on an "official" website but it purports to post from the SEC EDGAR database.

(I'm not really 100% sure of this calculation though.)

Fair market value generally is the price at which property would change hands between a willing buyer and a willing seller, neither being under any compulsion to buy or sell and both having reasonable knowledge of the facts. U.S. federal income tax law does not specifically prescribe how former JCI shareholders should determine the fair market value of the Tyco ordinary shares received in the merger.

One possible method of determining the fair market value of one Tyco ordinary share is to use the average of the high and low trading prices on the date of the merger, which was $45.69.

Other methods for determining the fair market value of Tyco ordinary shares are possible. Former JCI shareholders are not bound by the approach described above and may, in consultation with their tax advisors, use another approach.

as well as similar text on the IRS website:

One possible method of determining the fair market value of one Tyco ordinary share is to use the average of the high and low trading prices on the date of the merger, which was $45.69.

Using this figure, former JCI shareholders that elected to receive shares in the merger would receive cash and Tyco ordinary shares worth approximately $43.91 per share of JCI common stock exchanged in the merger (assuming no cash received in lieu of fractional shares).

The $47.67 per share figure is the trading price, or fair market value, of the OLD Johnson Controls, and should not be used to figure your gain nor to figure your basis in the new Johnson Controls International. Your new basis is the total of the gross proceeds received; that is, the cash plus the fair market value of the new shares, which was $45.69 per share. (I am not referring to cash-in-lieu for fractional shares, but the $5.7293 per share received upon the merger.) A person holding 100 shares of the old Johnson Controls would have received $572.93, plus 83.57 shares of the new company. Ignoring the fractional share, for simplicity's sake, gross proceeds would equal 83 x $45.69 = $3792.72 in fair market value of shares, plus the cash of $572.93, for a total of $4365.20. This is your basis in the 83 new shares. Regarding the fractional share, since new basis is at fair market value, there should be no gain or loss recognized upon its sale.

Not the answer you're looking for? Browse other questions tagged united-states taxes stocks corporate-acquisition or ask your own question.

3
Upcoming company merger with company I have stock in, help me interpret what is happening
1
stock option grant being cancelled because strike price greater than FMV and replaced with a new grant at a higher strike price
2
JCI headache part 2: How to calculate cost basis / tax consequences of JCI -> ADNT spinoff?
6
Found old paper shares for company that has since merged
6
How do I calculate the cost basis of Restricted Stock Units (RSUs)?
3
How/when to take loss in private company that re-orgs post-Chapter 11 and converts to new/fewer shares?
2
How to calculate profit for ESPP stocks including cost basis, tax, fees etc
3
US Tax implications? Bought stock options, paid AMT, company acquired at a loss, options worthless
3
I received stocks from a spin-off of a firm from which I possess some stocks. Which date is used to determine if capital gains are short or long-term?