I am 33 years old and currently enrolled in my employers traditional 401(k) plan where I am putting 4% of my salary pre tax and having a maximum of 4% employer match into my plan. After 6 more months of seniority I will be 100% vested and that employer match money will be mine to keep even if I leave.

My employer is advertising to us that they just added the option of a Roth 401k now. I am allowed to enroll in both at the same time and can choose to set contribution amounts for either. My employer will still match up to 4% in the Traditional plan, even if I choose to split MY contribution however I wish, even if I put 0% of my own money in Traditional 401(k) (apparently IRS rules say all employer contributions are pretax?):

(Eg. I can put 2% pretax income in Traditional, 2% post tax income in Roth, and Employer can put 4% contribution in traditional as an example.)

Apparently once I am vested, they offer Roth Conversions where I can move money from my Traditional 401k to my Roth 401k, and I can do this up to twice a year. When I do then of course I have to claim this money on my taxes that calendar year and pay taxes on it.

When I am 59.5 years of age I can take money from this and not have to pay income taxes nor cap gains on earnings.

My question is, what is the best choice here? Outside of my 401k I have a Traditional IRA with roughly the same amount, but I currently do not have a Roth.

Note: I contend that my question is similar to the tagged potential dupe though a different question. The potential dupe is from the context of someone newly entering the workforce, where my situation is of somebody with over 10 years into a career earning near the glass ceiling for my profession in my area of the country.

The Roth/Traditional decision is complex, but can be broken down into a set of simple rules.

Ideally, you want to choose to tax your money at the lowest possible rate. This specifically refers to your marginal rate, the rate you last $100 was taxed or next $100 of income with be taxed. That, in itself, is another issue, answered with questions here discussing marginal rates.

My suggestion has been that if you are in the 15% bracket, use Roth. And continue to do so until you hit 25%. At that point, begin to shift to the traditional, pre-tax 401(k) or IRA. (My article The 15% solution, goes into detail on this, although it references the 2013 tax rates. I need to re-edit).

If you are already in the 25% bracket, I'd suggest just going pre-tax. Given the ability to convert, it's not as if there are 2 points in time (deposit and withdrawal) but you can decide every year if your situation changes. It's not uncommon to get married, have a baby, buy a house, and find you just dropped back down to 15% marginal rate when you were solidly 25% prior.

A single person hits the top of the 15% bracket (in 2017) at $37,950 taxable. Add the standard deduction and exemption, and you are at $48,350. The tax on this is $5226, less than 10% average, despite the next $100 being taxed at 25%. It would take over $1M to have an account large enough to withdraw $40K/yr. If you blow through that number, you hit 25%, I agree, but why pay 25% now, for sure, to avoid 'maybe' hitting 25% later? You have decades of opportunities for conversion, and even more when the funds are transferred to IRAs if you have a job change. (And the conversion discussion has multiple layers when the IRA is involved)

Say you are 'too' successful. You are hitting $2M before age 55. If you retire post-55, you can withdraw from the 401(k) penalty free. But, you have 15 years before you'd start to take SS benefits. 15 years to use conversions, even if pushing into 25%, to reduce the impact of SS taxation.

My advice is not a set-and-forget solution. It's an annual evaluation of the plan for the coming year. 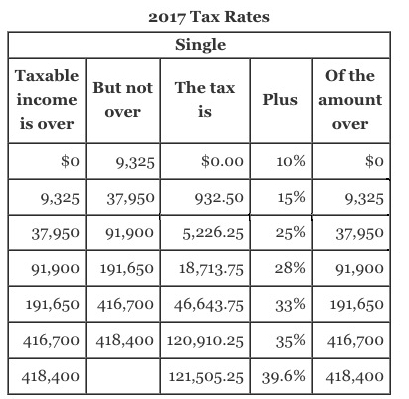 I note that median individual income is ~$30K which puts that median single at ~20K taxable. This is where the analysis begins. This earner might have upward mobility, to reach the 25% bracket and begin to save pre-tax. The goal would be to have a mix of pre/post tax money, so that over the course of their life, the 25% bracket was avoided, perhaps completely.

In general, my writing tend towards the second highest quintile, the 60-80% slice of the population. The numbers might appear arbitrary, but, in the end, the discussion has to start someplace. The concept I described here is best implemented by the single or couple who is still at 15%, but soon pushing higher than the 15/25 line. This enables them to start by saving in the Roth, and slowly shifting towards pre-tax. The final mix at retirement depends on that timing as well as their opportunities for conversions along the way.

Part of my focus on that line is that the differential is greatest in bracket shifts between 15 and 25%. Much of the benefit in the whole IRA/401 discussion is in that shift, depositing at 25%, yet withdrawing at 15%. The 28% couple might wish to avoid the 33% bracket at retirement, but that level of income impacts far fewer people, and fewer still that are either reading these boards or my other writing.

In addition to JoeTaxpayer's thorough answer, I just want to tackle one particular question that was also asked:

...all employer contributions are pretax?

There are a few main reasons that employer contributions go into the traditional bucket instead of the Roth bucket:

The only way an employer could logically contribute to your Roth directly would be by increasing your W2 wages by the same amount, but if they did that then you could just contribute to your own Roth with the extra money (up to the annual limit which is currently $18K).

(Really a comment on JoeTaxpayer's answer but it's too long)

There's one big factor that for some people tips things strongly in favor of the Roth:

While the limits on paper for traditional and Roth are the same, in practice they are not--you can contribute more to a Roth than you can to a traditional.

Not the answer you're looking for? Browse other questions tagged united-states 401k roth-401k roth-conversion employer-match or ask your own question.