How can a skipped a early repayment on a specific month can affect the cost of my mortgage?

I struggle to understand how mortgage and interest rates works. (I made up the figures to keep it simple)

First of all, my online statements keeps saying that the term of the mortgage is 29years and few months, this goes down a month each month even if I double the amount I repay. If I repay for that amount of time (and even the 950 minimum) surely I'll end up paying more that I should !?

My current understanding of things is that the £1000 are directly subtracted from the balance, and the 950 are a bit harder as some of it is subtracted and some just goes into the banks's pocket (how much would be useful to know)

My main question is : What is the formula to calculate the cost of skipping a £1000 payment on a given month ?

You refer to your monthly "online statements". Does these have an entry for "outstanding balance" or something similar. Does it go down by slightly more than 1000 each month when you make both a regular and extra payment?

In response to your main question:

Look at it this way:

You owe a certain amount of money at the start of the month. It grows at the stated interest rate throughout the month, reaching a new balance owed by the end of the month.

Then you throw some money in, reducing the balance owed, and the whole process continues, month by month.

If you throw in more each month than that months growth, then eventually you'll pay off the whole thing.

The regular payment (950 in your case) is designed to pay off all the month's growth and some of the previous balance, thereby bringing the balance owed to zero in the 29+ years you mentioned. Paying more than that amount will decrease the balance owed, and thus the growth for the next month, shortening the time to pay off the total,

If you skip a 1000 extra payment, you'll need to pay a months mortgage interest on the larger balance owed, so the actual "cost" is the month's interest on 1000, or about 2.70

EDIT: This assumes that the extra payment is truly only "delayed", and that the next month the regular 950 payment, the delayed 1000 and that month's usual 1000 are all paid. If you continue to postpone the extra 1000 payment, the costs will skyrocket as others have shown...

The danger is that the mortgage company is regarding the extra payments as an early payment and is just holding them (at no interest to you)to make the regular monthly payments on schedule. You really need to be sure that the reduction in balance owed each month reflects the extra payment.

First of all, my online statements keeps saying that the term of the mortgage is 29years and few months, this goes down a month each month even if I double the amount I repay. If I repay for that amount of time (and even the 950 minimum) surely I'll end up paying more that I should !?

The online statements that show the next payments and balances; most banks don't revise this. This is a static statement generated once in 2 years and keeps getting shown notionally as if you are making normal payments. So don't pay to much attention to this. You are right that the number of years should decrease faster.

You would get a yearly statements, just make sure all your payments are reflected in it.

My current understanding of things is that the £1000 are directly subtracted from the balance, and the 950 are a bit harder as some of it is subtracted and some just goes into the banks's pocket (how much would be useful to know)

On the next row, this Closing Balance will be your Opening Balance

Run this for your years and you should be able to see how the interest reduces over period.

It's quite easy to see the difference, without any formulas; though if you want to see the formula, google 'mortgage payment calculator' and you'll find it laid out well. Here's the approximate formula:

And then of course total cost-of-borrowing is Payment*(Number of payments). Remember to calculate rate as a monthly rate (look at your documents; .0323 might be your annualized compounded rate, or it might be 12*monthly rate, depends on how your local rules are). Assuming .0323 is 12*monthly rate, as it would often be in the US, then:

M = 895, so 950 is a bit above that - either implying the rate is higher by a bit than you say, or there are some fees (maybe taxes?) or something else in there.

Then, at any point, you can determine the "cost" of not paying an extra 1000 pounds off by entering the details in there - make sure to fix the right number of payments remaining.

Then look at the difference. The difference in the "total amount owed", minus 1000 pounds, is the amount it would cost you to skip one extra payment. That's because what you're effectively doing is, right now, reducing the total principal.

Of course, if you're skipping that payment somewhere down the line, the cost will be less - as there's less time for that amount to generate interest - but it should give you an idea.

You can also determine an approximate answer by looking at your mortgage closing documents. Assuming the UK works roughly like the US, one thing your lender ought to tell you (in writing) is the total cost of borrowing. I.E., what the total amount of money you'll pay after 30 years. Since you may not have a fixed-rate mortgage like we do in the US, it may be approximate, but the concept should still be there.

For example, let's say you pay 1895 per month (I am assuming my model here, assuming the extra 55 are going to taxes or something non-mortgage related), and two years in want to skip a payment. Plugging things in, each payment of 1000 pounds is saving 520 extra pounds over the life of the mortage (rather than 560 pounds as at day 1). You'll see the amount stay more or less stable for 10 years or so, then start to drop more quickly as the principal starts dropping more rapidly after around ten years (since its not linear, but exponential).

All of this assumes that you're accurately describing how the 1000 pounds is applied - to the principal. Not all localities automatically do that; I'm not in the UK so I don't know their law, but it used to be common in many places that "Extra" payments were assumed to be making an early payment of the next month, and so wouldn't be applied until then - not saving you any interest. That's slowly going away as more places realize that's very consumer unfriendly, even though it sounds "nice", so hopefully it is not true in your case: but verify with your lender that what you think should be happening with the money is.

Some mortgages don't allow overpayments, and your extra 1000 would simply be applied to future due monthly payments. If this is the case, you would be now 'months ahead' in paying, but didn't save a single penny on interest.

This form of mortgage is the standard in Germany, and mostly unknown in the US (most people in the US find the concept even outrageous). I don't know which form is possible/used in the UK, but you need to verify this for your loan.

I think a simple amortization table would help you. The above answers (in my opinion) don't show you a direct correlation between the affect of payment and interest on it's reduction of the balance (or principle).

I changed the symbols to pounds. i.e - I'm from the U.S. and am treating the problem as such.

This shows the numbers inside an amortization chart: 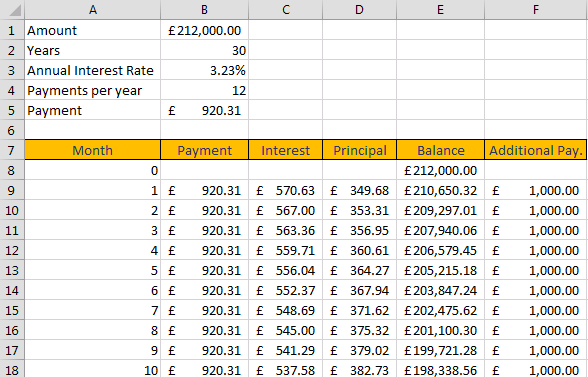 and here are the formulas: 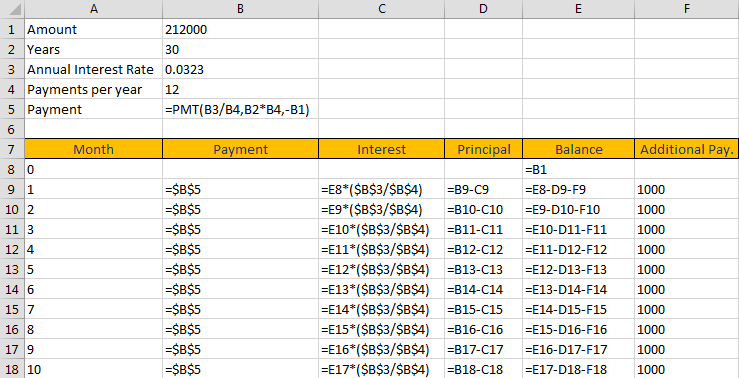 If you follow the formulas and replicate this in an Excel sheet, you can find how long it will take you to repay the loan. Make sure to correct the amount and years as mine were an estimate of the original figure.

If there is anything I am leaving out, or would like me to explain, feel free to comment.

Not the answer you're looking for? Browse other questions tagged united-kingdom mortgage interest-rate repayment or ask your own question.

2
How can I check if my mortgage balance is correct?
1
How does one compare repayment of a loan based on a fixed payment of some dollar per $1000 borrowed?
9
Overpaying on mortgage - How is term reduction calculated?
2
Calculator for fixed mortgage overpayment plus regular payment
2
How much is saved by changing the date of monthly mortage payments?
2
Does early repayment affect the credit score?
3
Will I benefit from remortgaging at the end of a fixed term?
5
How does paying extra on my mortgage affect my amortization schedule?
1
How do I calculate the equity I have in my home when overpaying on mortgage?