How to increase chances of profiting from a pyramid scheme/multi-level marketing? [closed]

I know that the top of the pyramid is where 99% of the money is, but some people below are still motivated enough to continue with lower income. Depending on how much money the pyramid makes, I'd imagine even the worst off in some pyramid schemes could bank hundreds per month or maybe more.

Typically, most want you to buy a product and refer others to that product, and you get paid based on a downline -- so they brag about income being "unlimited" in theory since you could be on the bottom and still bring in enough people to make a satisfactory income or maybe even a "side income."

As a general rule in many countries, pyramid schemes are illegal, so don't plan on getting rich anytime soon by being involved in one. Anything you earn through such a scheme is subject to forfeiture because it is ill-gotten gains.

The entire basis of a pyramid scheme is that the focus is principally on recruiting new "downlines", not selling a product or service. I would strongly advise you to find a different way to riches.

Multi-level marketing very rarely makes much money for anyone except the first people in the food chain, and the odds of finding such an early-stage opportunity are exceedingly small. For every successful MLM program there are probably 25 that never make it off the launch pad. Be honest in asking yourself -- if it was really that easy, why wouldn't everyone just get into MLM? It's more hype than substance. Do you know who buys most of the product? The newest people who "drink the Koolaid", because they're convinced they need to have plenty of inventory on hand for their potential customers. I can't tell you how many people I know who spent hundreds or even thousands of dollars on buying product they never managed to sell. It's much tougher than people think, even with a good product.

All the "money" you might receive from a pyramid scheme is "ill-gotten gains". Even if you didn't know it was a pyramid scheme. If through deliberate planning or dumb luck, you manage to get more money out of a pyramid scheme than you put in, the government can sue you for any "profit" you made.

For example, in the Bernie Madoff scandal, more than 1,000 people, funds and institutions were sued for the excess money they made above their initial investment.

Suffice to say, if you make enough "profit" from a pyramid scheme to materially change your life, it's only going to last until the scheme collapses and the government comes after you for the excess.

I assume you are referring to Multi-Level Marketing, which have organizational structures that look like pyramids. As others have pointed out Ponzi schemes (often referred to as pyramid) are illegal.

The key to multi-level marketing is understanding the true objective. It is not to sell soap, vitamins, cell phone plans or whatever. The key is to understand that you are building a marketing organization. You must motivate and train others to do the same. You cannot rely on others to do it for you, you must do it yourself.

While the marketing for MLMs often say "anyone can do it", such things waste people's time. There are certain personality types that are not suited for such skills. Also if one posses those types of skills, there may be better opportunities in traditional companies. Maybe.

A simple pyramid scheme, where the person at the top gets their pay out from the people at the bottom (the new participants), has two important characteristics:

For instance, take a look at this scheme, where the number of new participants to be recruited is 6: 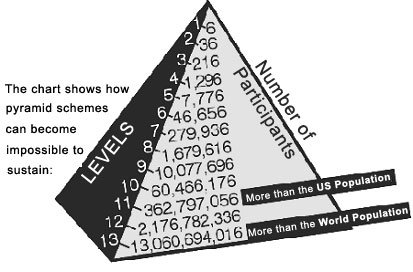 Let's say you get in pretty high up, at the third level. Also, let's assume it only has three levels, so you pay the person on level one, who is then retired from the pyramid. The person above you, who recruited you, gets paid out by the people you recruit, and you get paid out by the recruits of your recruits.

As far as pyramid schemes go, that's fantastic. Usually the number of recruits and the number of levels between top and bottom (between paying to get in and getting paid out yourself) are both larger.
Also, you got in at the beginning, at level 3 overall.

But — assuming that the pyramid grows evenly — even here, there need to be over 7,500 participants in the scheme, before you get your pay out. And you got in early! Had you gotten in only one level later, or would the number of levels between top and bottom be one more, as you can see, the number of total participants needed for you to get your pay out increases drastically.

(...) they brag about income being "unlimited" in theory since you could be on the bottom and still bring in enough people to make a satisfactory income (...)

No. This is not true. The pool of people who are willing to participate will be exhausted pretty quick.

33
What warnings would you tell a friend about to enter a multi-level marketing (MLM) business venture?
181
Friend was brainwashed by MLM-/ponzi investment scam. What can I do?