I currently have an individual HDHP. I am trying to understand the implications on my HSA contribution limit for 2016 if I add my wife to my policy.

It looks like the Line 3 Limitation Chart and Worksheet flowchart thing here suggests that you can basically average your yearly contribution amount, based on the number of months you were on each plan: 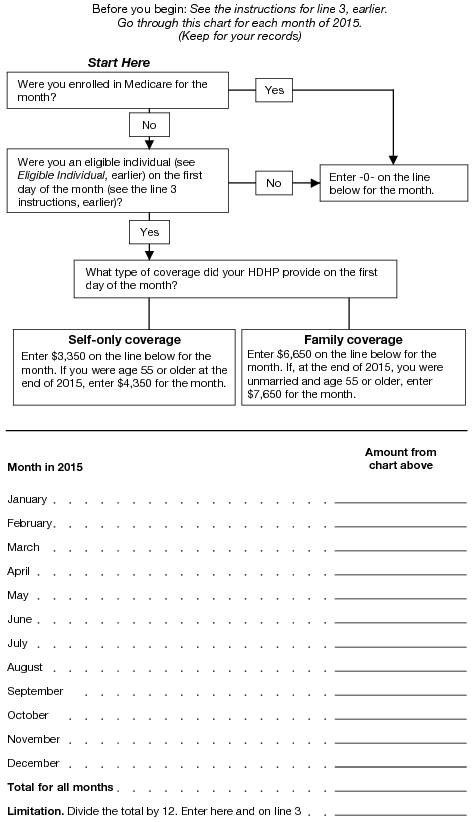 The reason it's confusing is that the main 969 publication has a lot of references on your status on Dec 1st of the year, allowing you to potentially contribute the entire amount for the year.. sort of.

Basically one of the two situations is true for 2016 contribution limits:

So, as an example if my wife joins my insurance today (middle of August 2016) and leaves on November 15, we could contribute in 2016:

Not the answer you're looking for? Browse other questions tagged united-states hsa or ask your own question.

8
What is the HSA contribution limit when you are only enrolled in HDHP for part of the year?

2
How are HSA contribution limits calculated when filing taxes jointly?
2
HSA contribution and self HDHP
1
HSA contribution max for unmarried dual family coverage under HDHPs
4
Is FSA spending eligible if the service is prior to Plan Year but the payment is within it?
7
I purchased a drug in country A, and consumed it in country B; neither A nor B is the US; is that a qualified medical expense from the HSA standpoint?
4
My dependent is covered by both HDHP and non-HDHP insurance plans - is this legal?
2
Contribution limits and deadlines for HSA clarification
5
Do employer contributions to an HSA count towards contribution limits?
5
HSA eligibility when with employer plans
12
How do I solve an accidental violation of Medicare's 6-Month look-back HSA contribution prohibition?