How can I remove the movement of the stock market as a whole from the movement in price of an individual share?

I think it would be useful to have a chart that shows how much a specific share out- or under-performs the composite index, e.g. Apple compared to the Nasdaq-100. I think (though I may be naive about this) that this would allow me to see how much of the share price movement is due to the particular share, and how much is due to market conditions.

Is there a website or software that does this? On Google Finance, for example, I can compare Apple to Nasdaq, and this gives me two curves that move more or less in tandem at the moment. What I would like is to basically subtract them from each other, and only see an Apple curve moving around a horizontal line.

Does such software exist? Is this even remotely useful?

The portion of a stock movement not correlated with stocks in general is called Alpha. I don't know of any online tools to graph alpha.

Keep in mind that a company like Apple is so huge right now that any properly weighted index will have to correlate with it to some degree.

As others have pointed out, the value of Apple's stock and the NASDAQ are most likely highly correlated for a number of reasons, not least among them the fact that Apple is part of the NASDAQ. However, because numerous factors affect the entire market, or at least a significant subset of it, it makes sense to develop a strategy to remove all of these factors without resorting to use of an index. Using an index to remove the effect of these factors might be a good idea, but you run the risk of potentially introducing other factors that affect the index, but not Apple. I don't know what those would be, but it's a valid theoretical concern.

In your question, you said you wanted to

subtract them from each other, and only see an Apple curve moving around a horizontal line.

The basic strategy I plan to use is similar but even simpler. Instead of graphing Apple's stock price, we can plot the difference between its stock price on business day t and business day t-1, which gives us this graph, which is essentially what you're looking for: 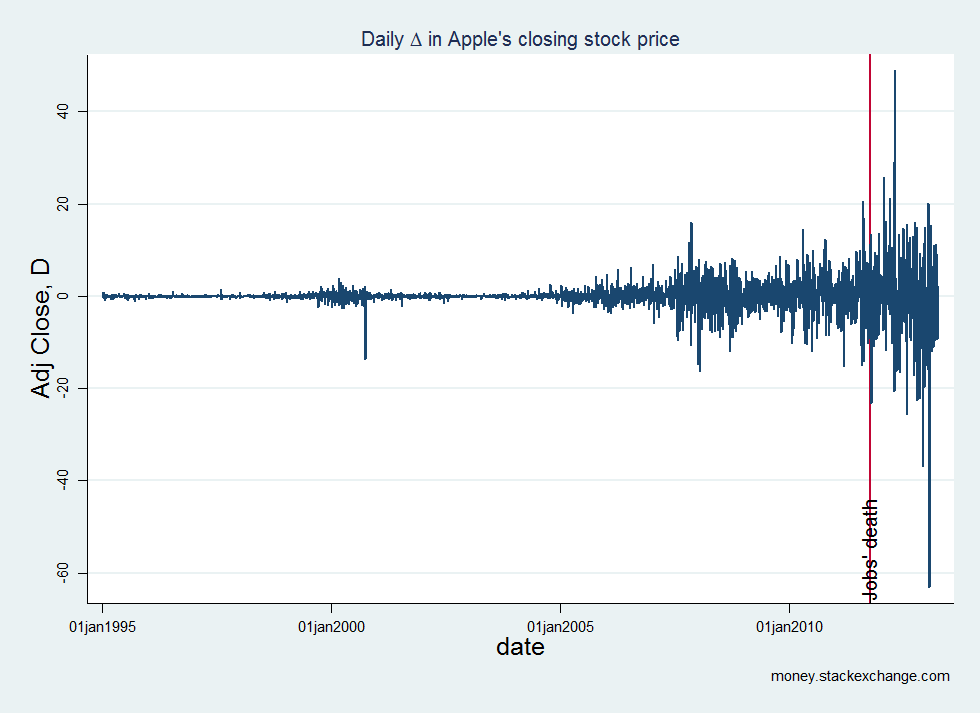 While this is only the preliminaries, it should give you a basic idea of one procedure that's used extensively to do just what you're asking. I don't know of a website that will automatically give you such a metric, but you could download the price data and use Excel, Stata, etc. to analyze this.

The reasoning behind this methodology builds heavily on time series econometrics, which for the sake of simplicity I won't go into in great detail, but I'll provide a brief explanation to satisfy the curious. In simple econometrics, most time series are approximated by a mathematical process comprised of several components:

In the simplest case, the equations for a time series containing one or more of the above components are of the form that taking the first difference (the procedure I used above) will leave only the random component. However, if you want to pursue this rigorously, you would first perform a set of tests to determine if these components exist and if differencing is the best procedure to remove those that are present.

Once you've reduced the series to its random component, you can use that component to examine how the process underlying the stock price has changed over the years. In my example, I highlighted Steve Jobs' death on the chart because it's one factor that may have led to the increased standard deviation/volatility of Apple's stock price. Although charts are somewhat subjective, it appears that the volatility was already increasing before his death, which could reflect other factors or the increasing expectation that he wouldn't be running the company in the near future, for whatever reason.

My discussion of time series decomposition and the definitions of various components relies heavily on Walter Ender's text Applied Econometric Time Series. If you're interested, simple mathematical representations and a few relevant graphs are found on pages 1-3.

Another related procedure would be to take the logarithm of the quotient of the current day's price and the previous day's price. In Apple's case, doing so yields this graph: 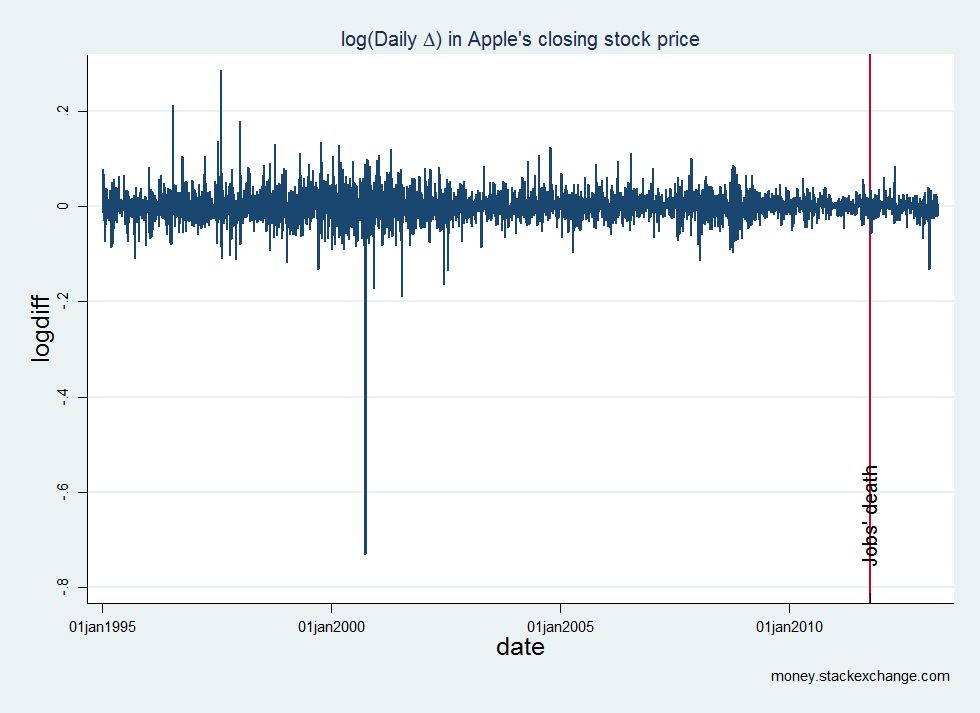 This reduces the overall magnitude of the values and allows you to see potential outliers more clearly. This produces a similar effect to the difference taken above because the log of a quotient is the same as the difference of the logs

The significant drop depicted during the year 2000 occurred between September 28th and September 29th, where the stock price dropped from 26.36 to 12.69. Apart from the general environment of the dot-com bubble bursting, I'm not sure why this occurred.

Another excellent resource for time series econometrics is James Hamilton's book, Time Series Analysis. It's considered a classic in the field of econometrics, although similar to Enders' book, it's fairly advanced for most investors.

I used Stata to generate the graphs above with data from Yahoo! Finance:

There are a couple of nuances in this code related to how I defined the time series and the presence of weekends, but they don't affect the overall concept. For a robust analysis, I would make a few quick tweaks that would make the graphs less appealing without more work, but would allow for more accurate econometrics.

I use StockCharts for spread charting. To take your question as an example, here is the chart of Apple against Nasdaq.

1
How do I calculate two standard deviations away from the stock price?

3
Rate of change of beta
1
Why would this kind of penny stock increase so much in value?
0
Understanding the Nasdaq insider trading information
3
Reading depth charts and mathematics of price determination
0
The relationship between delivery percentage and share price
18
Do ETFs move on their own? Or only on aggregate from the individual holdings?