Will a British bank accept a twice-endorsed cheque?

I am an American citizen, living in the U.S., and I've been sent a small refund from a UK vendor in the form of a cheque drawn on the Bank of Scotland and made out to me.

My bank will charge $23 to process the cheque, but it's only worth about $35. A British friend has offered to present the cheque at her bank in England and give me the money in cash when she visits me.

Will a British bank accept a twice-endorsed cheque? If so, what do I need to write on the back? (I've already endorsed it)

If not, do you have any suggestions for what to do with the cheque other than handing over most of it to Capital One Bank?

Adding info: The cheque is in pounds. The vendor is a cumbersome bureaucracy which is unlikely to write a new cheque. I'm sure my friend would be willing to have the cheque deposited in her account. What do you suggest I write on the back of the cheque to make it acceptable to her bank?

Cheques in the UK are generally "crossed", which means they can only be deposited into an account owned by the person named on the cheque:

The crossing takes the form of two vertical lines across the middle and the words "A/C payee" written along the lines: 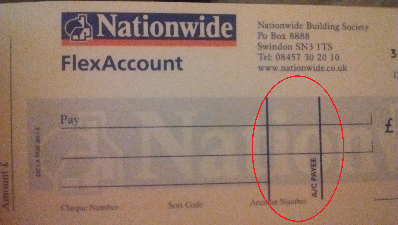 If your cheque is like that, you won't be able to get anyone else to do much with it. Given that most cheques in the UK are like this, "endorsing" cheques is uncommon.

Perhaps you could return it to the vendor and ask them to make a new one payable directly to your friend?

Banks in the U.S. typically charge a fee to handle checks in foreign currency. The $23 quoted by your bank is pretty typical, but some banks might have lower or no fees.

If you don't think the check issuer will issue a new check in your friend's name, then based on Ganesh's answer, I don't think there is anything else you can do. You could call up different banks and credit unions in your area to see if they have a lower fee. If you can't find one to beat your bank, just pay the $23. You'll net $12, and you won't have to waste any more of your or your friend's time.

Not the answer you're looking for? Browse other questions tagged united-kingdom check or ask your own question.

1
Can I convert a cheque to money in any bank? Is there a fee?

13
Bank Draft vs. Certified Cheque - when is it appropriate to use one or the other?
9
In double entry book-keeping, how should I record writing of a check?
1
deposits of post-dated checks in the bank, which the bank will deposit on the deposit date?
2
What rules govern what a bank must accept for deposit in the US?
3
How can I make the cheque for my bank account closing balance usable by someone else?
3
Is a cheque made out directly to the bank susceptible to fraud?