Received an unexpected cashiers check for over $2K from another state - is this some scam?

This is actually about my sister-in-law who lives in Georgia. She just received a "cashiers check" for $2395 from a company in Indiana. It looks like this: 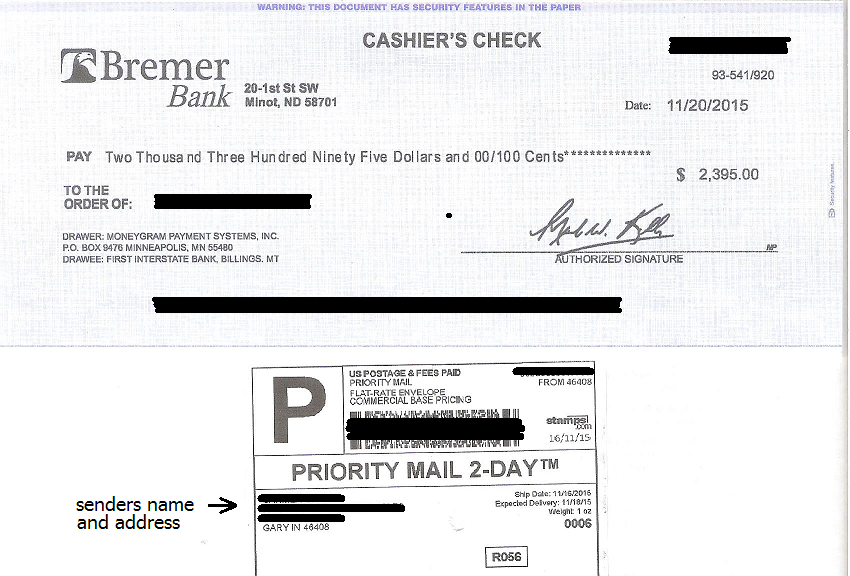 She said that she has been doing "mystery shopper" work for a company and thought that this would be payment for that, but that usually the payments she received for that work were just a couple of hundreds of dollars.

She said she had not done that much of that "mystery shopper" work that she would have expected to receive anything close to the amount on this check.

She was asking me about it but I thought that if she does not know the sender, perhaps this could be some kind of new scam and she should check with the local police (which she said she was going to do).

Update: I just found out that there was indeed a letter included with the check (and it seems to have instructions similar to those mentioned in the answer by "BrenBarn"). This is indeed related to that "mystery shopper" work. Turns out the reason she was not sure was because the sender of that check has a different company name than the company she normally dealt with. Here is a part of the letter: 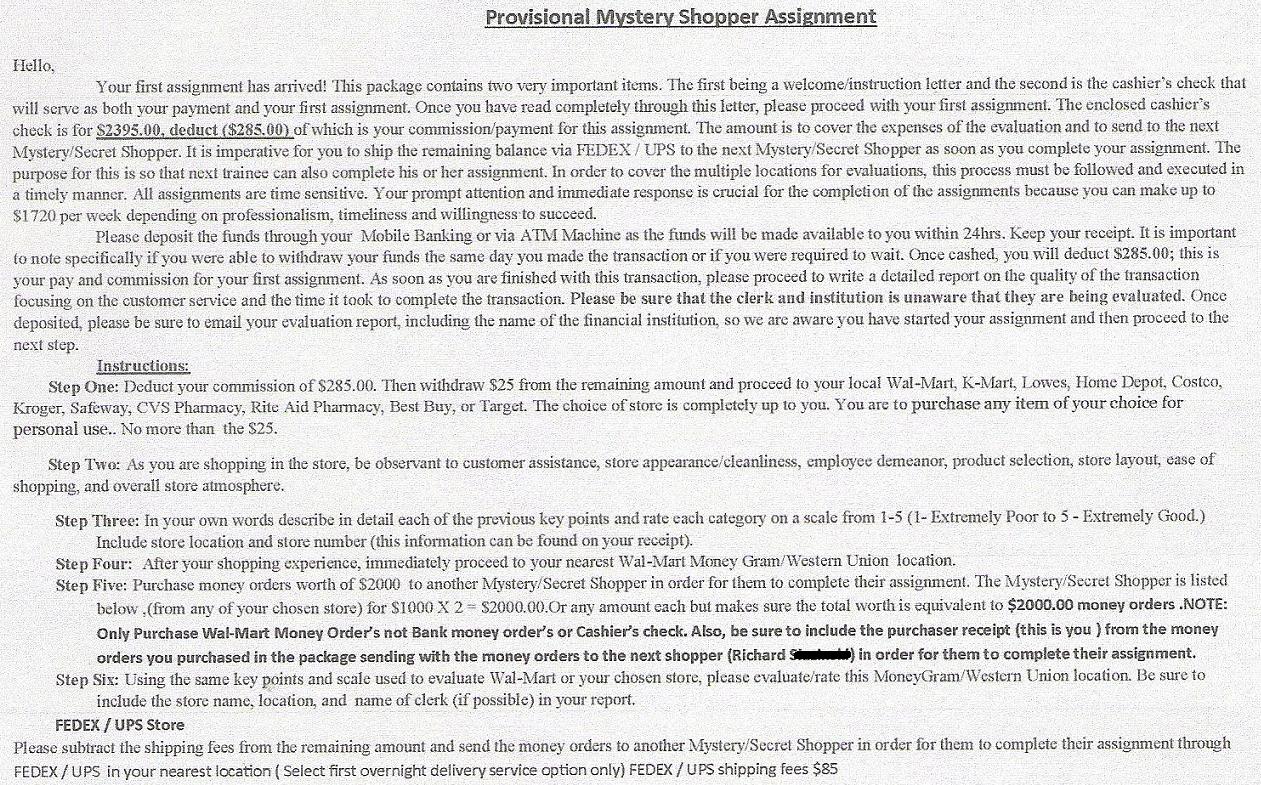 It is likely a scam. In fact the whole mystery shopping "job" may be a scam. There is a Snopes page about cashier's check scams, as well as a US government page which specifically mentions mystery shopping as a scam angle.

As for how the scam works, from the occ.gov site I just linked:

It is somewhat unusual in that, from what you say, there has been no attempt thus far to get money back. However, your sister-in-law may have received that info separately, or received it as part of her mystery shopping job but didn't mention it to you with regard to this check. Typically the scam involves telling the recipient to transfer money to a third party (e.g., by buying goods as a mystery shopper, or via wire transfer to "reimburse" someone associated with a sham operation). By the time the cashier's check is revealed as fraudulent, the victim has already transferred away his/her own real money.

It's probably worth taking the check to your or her bank and asking them about it. They may have more info. Also, banks usually want to know about scams like this because, in the long run, they accumulate data on them and share that with law enforcement and can eventually catch some of the scammers.

Edit: Just to help anyone who may be reading this later. The letter you added confirms it is absolutely a scam. My boss was once contacted via a scam operation very similar to this. The huge red flag (in addition to others already mentioned) is that you are being "given" a check for over $2000, of which only $25 is purportedly for actual mystery shopping and $285 is payment for you, the mystery shopper. The whole rest of the $2000+ amount is for you to wire to "another Mystery/Secret Shopper in order for them to complete their assignment". They are giving you $2000 to give to someone else who is supposedly another one of their own employees/contractors. Ask yourself what sane business would conduct their operations in this way. If you work at a law office, or a hamburger stand, or a school, or anything you like, does your boss ever say "Here is your paycheck for $5000. I know you only earned $1000, but I'm just going to give you the whole $5000, and you're supposed to use $4000 of it to pay your coworker Joe his wages." No. There is no reason to do that except that the "other mystery shopper" is actually the scammer.

This is so very much a scam. The accepted answer already tells you the basics of it. In addition to the cheque being fake, there is also the possibility that the cheque is a legitimate cheque but has been stolen (or swindled off) from somebody else. In that case, the delay with which the cashing of the cheque will blow up can be considerably longer than the accepted answer states since it depends on the other victim noticing and reporting the fraudulent transfer.

The end result is the same: you are not going to be allowed to keep the money.

Report this to both your sister's bank as well as her local police. Nothing good can come off this.

Some of these answers are actually wrong.

Basically if you were to cash this cheque, you are committing bank fraud. The cheque is usually fake and ends up with them cashing it off your account--this is how cheques work, when you cash a cheque, you are the one ultimately responsible for the validity of what you're cashing. This is why large cheques are balanced against your active account--so what happens is they essentially just take money from you and leave you red handed.

Not the answer you're looking for? Browse other questions tagged united-states scams cashier-check or ask your own question.

-1
Someone stole money from my account, how can I get it back?
1
Two Craigslist “Buyers” were trying to scam me
2
Scammer wants details and credentials for my empty & unused bank account. What could go wrong?

18
Legitimate unclaimed property that doesn't appear in any state directory?
29
Received federal student loan collection letter, but never had one. What to do?
31
Funds deposited in my bank account. Account closed for suspicious activity. Is this a scam?
6
Is this a cashier check scam?
23
Unexpected goods delivery - is this a scam, and what kind of scam?
3
If I worked remotely from another state for 3 months, do I need to file in both states?
23
Ordered bike parts, paid with Paypal, received face masks. How do I get my money back from this scam?