First salary in the UK not being taxed

I just started working in the UK for the first time and received my first payslip. Another colleague of mine got his second payslip here, from the same company.

We were surprised that in the detail no amount for "Tax" was deducted.

I researched a bit and found that for the tax code 1060L, specified in our payslip, we got some tax free income for a while.

However, since I'm not an English native speaker, I still have some doubts on how it works.

As I understand it:

This answer is a conclusion of a discussion in chat 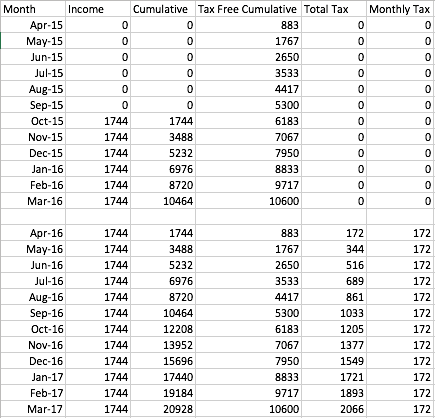 You also asked about a monthly salary of 3750. 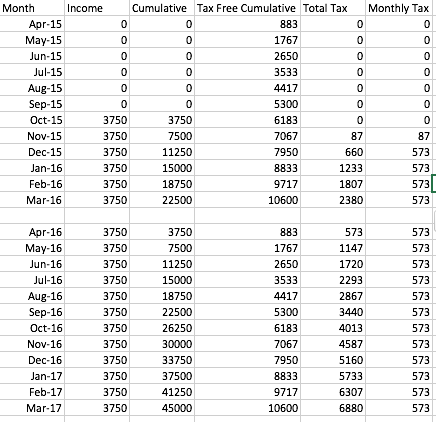 Tax in the UK is handled on a monthly or weekly basis depending on how often you are paid, so your tax code means that for each month, you will get £10600/12 = £883 tax free and then the rest will be taxed. That means that normally people get about the same amount in each pay packet throughout the year, rather than initially paying no tax and then suddenly starting to pay tax

However, the allowance is actually an annual one for the entire tax year, from April 6th 2015 to April 5th 2016. So in your case if you haven't been working in the UK from April until you started this job, you get to "catch up" with all the allowance you haven't had so far. So in practice you'll get about £5300 of pay tax free and then will start paying tax at the usual monthly rate. That probably explains why you are paying very little tax in the initial months of your employment.

I've never had consistent pay for the first couple of months in a new job (UK). Typically there's no tax taken in the first month, most of the first month's tax in the second, and by the third month things have settled down. Although using up the personal allowance over the first few months is sometimes seen, I'm more used to seeing two months of unusual pay then tax taken at a rate to spread the remaining allowance evenly over the rest of the year. Your pay may change again by more than you expect at the new tax year. In particular as the same personal allowance is spread over more months, your net pay may go down in April (assuming you didn't have a job for the first few months of this tax year)*.

There are many online tax calculators to help you calculate your expected values. I won't recommend one as I haven't used any -- I tend to throw together a spreadsheet from HMRCs allowances data.

If you've had another job in this tax year, you'll need to take into account the figures on the P45 from that job. If you haven't received a P45 yet, your final payslip should give you that information. It's also possible you'll have to take into account any benefits you've received.

A few caveats to this:

tl;dr It will fluctuate at first, the year-end figures matter the most.

I'm new to the UK and also started work in September 2015. It also drove me insane I had such a hard time understanding how the taxes worked. After a lot of research, I came upon this thread, and read the whole thing, including the bits in the chat where James, you posted the final excel table.

And I'm happy to say: the final table was correct! Chiapa, you can check for yourself with this tool.

Your employer should make sure that you pay the same amount of tax every month, and that over the tax year you pay the correct amount. If you started work in January and you make £2,000 a month, then your employer can see that you will make £6,000 in the tax year, which is tax free, so you don't pay tax.

"Emergency tax" was mentioned elsewhere: If you switch jobs, and you don't hand over your P45, then the next company doesn't know how much you made in your previous job. They must make sure that you don't pay too little, so they will assume that you made tons of money and have to pay 45% on everything you earn above that, so they will actually deduct 45% tax from your salary. That's called emergency tax. (I might be wrong and it might be only 40%). Of course you can do your tax return at the beginning of the next tax year in April, and HMRC will see that you paid much too much tax, and refund every penny that you overpaid.

Your payslip should not show tax deductions until you have fully utilised your cumulative personal allowance for the tax year, if you started working somewhere in the middle of the tax year. example, Starting date: 01/01/2016 Salary: 2500

This employee will not pay tax for the entire tax year of 2015/2016 as his total income is only £7500 (3*£2500), which is below the personal allowance. Assume tax has been deducted by mistake from his income, it will be rebated later on.

Correct me if I made any mistake.

Not the answer you're looking for? Browse other questions tagged income-tax united-kingdom tax-deduction or ask your own question.

6
Why are US taxes taken out as if spread over the year instead of as due?
1
Tax Code of D0 and 944L
1
Income tax return for 2013 in Germany - how to?
2
I paid taxes from my first day of work. Is this a problem with HMRC, or my employer?
4
Confused about 'tax free income'
2
How does taxation work in the UK during the very first months of employment
6
Are you required to pay the full tax on income if your employer doesn't pay what they claim to?
3
UK Tax calculation on payment for contract serverence
0
How do I find out what are the min and max withholdings from each paycheque?