Is it true that more than 99% of active traders cannot beat the index?

Recently my pension fund gave a presentation at the place where I work. They explained that they invest by following the index of several stock exchanges. They reason that since 99% of the active traders are unable to outperform the index they cannot outperform it either.

Basically they claimed that 99% of the active traders would be better off doing absolutely nothing most of the time. This seems like a highly controversial statement to me. On the other hand an entity as big as a pension fun will probably have researched this thorougly.

After searching around on the web their claim seems to be supported by both 'amateur researchers' 1 and academics 2, though not universally (see the comments on those articles). This search might also be extremely biased due to the key words I used. Since I do not know a lot about stock trading I find it hard to judge the quality of the sources I found.

My question is: Is it true that 99% of active traders cannot beat the index in the long term?

A supplemental questions if this is true: On what kinds of terms is this claim true? Some sites claim 10 years or less, but pension funds usually operate on the very long term (30+ years).

What decision are you trying to make? Are you interested day trading stocks to make it rich? Or are you looking at your investment options and trying to decide between an actively managed mutual fund and an ETF?

If the former, then precise statistics are hard to come by, but I believe that 99% of day traders would do better investing in an ETF.

Index funds outperform approximately 80 percent of all actively managed funds over long periods of time. They do so for one simple reason: rock-bottom costs. In a random market, we don't know what future returns will be. However, we do know that an investor who keeps his or her costs low will earn a higher return than one who does not. That's the indexer's edge.

Many people believe that your best option for investing is a diverse portfolio of ETFs, like this. This is what I do.

Obviously, these numbers can never be absolute simply because not all the information is public. Any statistic will most likely be biased.

I can tell you the following from my own experience that might get you closer in your answer:

Hence, even though I cannot give you exact numbers, I fully agree that traders cannot beat the index long term. If you add the invested time and effort that is necessary to follow an active strategy, then the equation looks even worse.

Mind you, active trading and active asset allocation (AAA) are two very different things. AAA can have a significant impact on your portfolio performance.

That is such a vague statement, I highly recommend disregarding it entirely, as it is impossible to know what they meant. Their goal is to convince you that index funds are the way to go, but depending on what they consider an 'active trader', they may be supporting their claim with irrelevant data

Their definition of 'active trader' could mean any one or more of the following: 1) retail investor 2) day trader 3) mutual fund 4) professional investor 5) fund continuously changing its position 6) hedge fund. I will go through all of these.

1) Most retail traders lose money. There are many reasons for this. Some rely on technical strategies that are largely unproven. Some buy rumors on penny stocks in hopes of making a quick buck. Some follow scammers on twitter who sell newsletters full of bogus stock tips. Some cant get around the psychology of trading, and thus close out losing positions late and winning positions early (or never at all) [I myself use to do this!!]. I am certain 99% of retail traders cant beat the market, because most of them, to be frank, put less effort into deciding what to trade than in deciding what to have for lunch. Even though your pension funds presentation is correct with respect to retail traders, it is largely irrelevant as professionals managing your money should not fall into any of these traps.

2) I call day traders active traders, but its likely not what your pension fund was referring to. Day trading is an entirely different animal to long or medium term investing, and thus I also think the typical performance is irrelevant, as they are not going to manage your money like a day trader anyway. 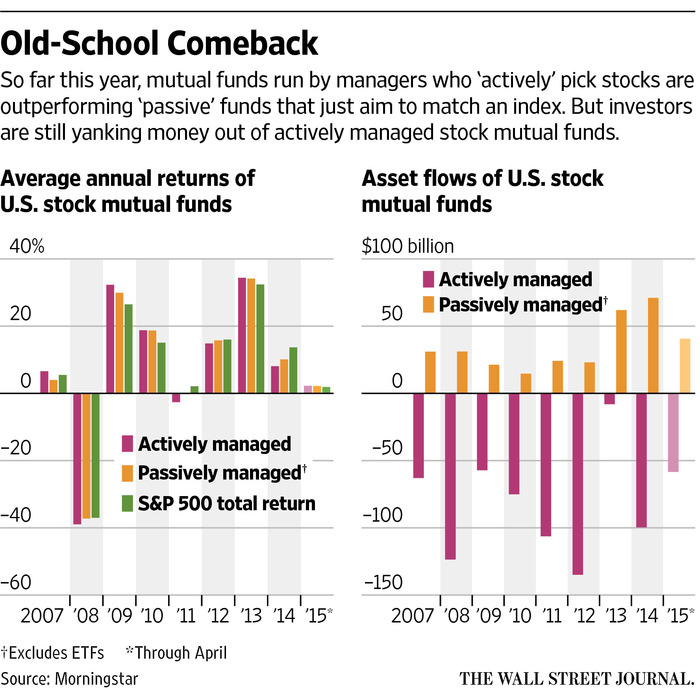 Whats interesting is that this false belief that index funds are always better has become so pervasive that you can see active funds have huge outflows and passive have huge inflows. It is becoming a crowded trade. I will spare you the proverb about large crowds and small doors.

Also, index funds are so heavily weighted towards a handful of stocks, that you end up becoming a stockpicker anyway. The S&P is almost indistinguishable from AAPL. Earlier this year, only 6 stocks were responsible for over 100% of gains in the NASDAQ index. Dont think FB has a good long term business model, or that Gilead and AMZN are a cheap buy? Well too bad if you bought QQQ, because those 3 stocks are your workhorses now. See here

6) That graphic is for mutual funds but your pension fund may have also been including hedge funds in their 99% figure. While many dont beat their own benchmark, its less than 99%. And there are reasons for it. Many have investors that are impatient. Fortress just had to close one of its funds, whose bets may actually pay off years from now, but too many people wanted their money out. Some hedge funds also have rules, eg long only, which can really limit your performance. While important to be aware of this, that placing your money with a hedge fund may not beat a benchmark, that does not automatically mean you should go with an index fund.

Not the answer you're looking for? Browse other questions tagged stocks stock-analysis index-fund or ask your own question.

26
Will the popularity of index funds cause a pricing bubble in the stocks that make up an index?
1
Trade options on index or the ETF that tracks the index
5
What evidence exists for claiming that you cannot beat the market?
4
How can Index ETFs gain more than the index they are following?
21
How to interpret stock performance charts "vs S&P 500"
64
Are Index Funds really as good as "experts" claim?
2
Index funds vs 3 funds financial products for long-term investment / retirement
4
If most actively managed funds don't beat the index why not choose the opposites?
1
Why don't accumulation index funds (dividends are reinvested) raise more than the indexes they track?
2
In what way do index funds "free-ride on the work done by active investors"?