How do I analyse moving averages?

I have calculated moving averages i.e. SMA, WMA , EMA for stock which I am going to buy. I have infered :

If you are long term investor it is better not to retain the share as price is decreasing as shown by both SMA and share price itself of 90 days. SMA of 20 days shows that in short term price is increasing but would meet 90 days SMA hence showing decreasing short term price (figure 2). Since WMA is decreasing sharply as we have taken 3 days average with high rating for current price and it would show that 3 days price is decreasing trend. But 20 days EMA suggest that now the stock price is going to stabilize and increase to previous value whereas 90 days EMA suggests that for long term investor the stock investment is good. 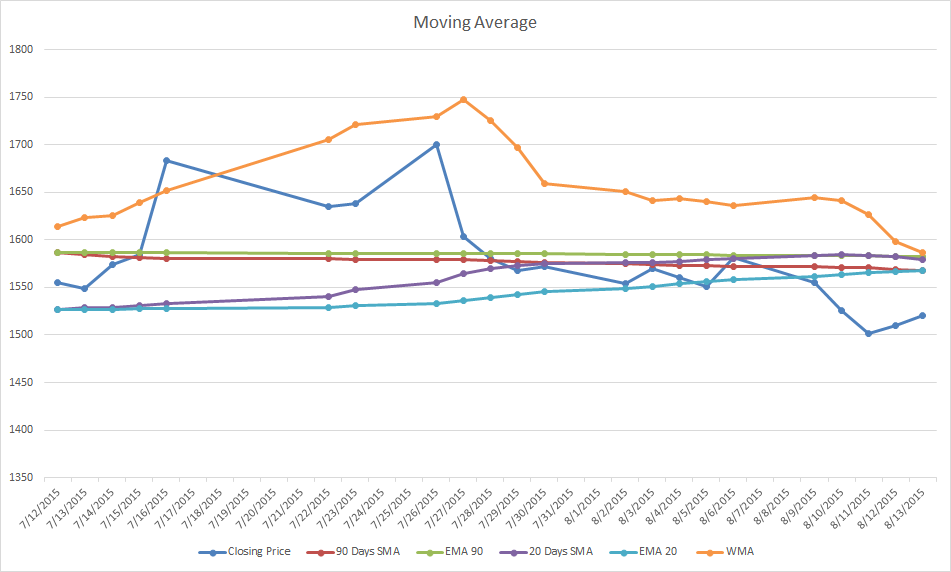 Moving Average is mere average line based on historical period; broadly use to view the trend. But it has no relation to price action in due future course. If price is going below 20 SMA then in near future even the SMA will start directing toward south. In your case if price has fallen below all the short period average lines and long period average line then it is bearish in nature. Soon in few days you may find 20 SMA leading downwards followed by closest period and then long. Also SMA and EMA can best be observed in charting software in candlestick mode. Because these moving averages can also be adjusted and viewed based on Opening price, High prices, Low Price or closing price. In you case I guess the data is of closing price data. Overlapping of averages may be sign of reversals. So if you want to buy this stock you may have to wait till all the average lines cross-over and when new trend begins with SMA of shortest avg period (20) leading above the long avg period (90 days in your case). Then you can buy and just follow the trend. I hope it answers you question.

One could use technical indicators in any number of ways...they aren't rigidly defined for use in any particular way. If they were, only computers would use them.

Similarly, a short-term moving average above the long-term moving average may indicate an overpriced stock. When you are dealing with more than one frequency, though, there is more disagreement about how to use technical indicators. Some traders would probably say the opposite: that a short term average above the long term average indicates an upward movement that will continue because they believe the stock has momentum.

Note that I am not saying I believe in using these averages to predict mean reversion or momentum effects, just that traders who rely on moving averages frequently do.

If you are going to be a long term investor you are only going to buy and hold. You will not sell. Thus future price is not relevant. Only dividend payout is relevant. Divide the dividend by the price you paid to get the yeald.

Edit: once again the sitesite will not allow me to add a comment, so I have to edit a previous post...

What you call 'active investor' is not really investing, it is speculating. When you try to 'buy low, sell high' you have, at best, a 50-50 chance of picking the low. You then pay a commission on that buy. After you buy then you have a 50-50 chance, at best, of picking the high. You also have to pay the commission on the sell. 50% times 50% is 25%.So you have, at best a 25% chance of buying low and selling high. You are churning your account which makes money for the broker whether you make money or not. If, instead, you buy and hold a dividend paying security then the going price is irrelevant. You paid for the security once and do not have to pay for it again. Meanwhile the dividends roll in forever. 'Buy low, sell high' is a fools game. Warren Buffet does not do it, he buys and holds.

Not the answer you're looking for? Browse other questions tagged stocks investing technical-analysis trend-trading or ask your own question.

4
What are the common moving averages used in a “Golden Cross” stock evaluation?
14
Pros & cons in Hungary of investing retirement savings exclusively in silver? What better alternatives, given my concerns?
1
Google Finance: Input Parameters For Simple Moving Averages
1
Moving Average Calculation In Minutes
3
How to do thorough research into a company to better understand whether to buy stock?
4
Why does short selling require borrowing?
1
How to calculate a trendline
0
How does a stake sale affect a company's stock price?
1
Calculating weekly simple moving average