On 6th Oct 2015 made part payment 80,000 and have opted for reduced emi option. Can someone tell me what will be the revised monthly emi amount? (approx.)

As per my calculation (not sure)

Screenshot of excel emi calculator which I am using and it shows principal outstanding. 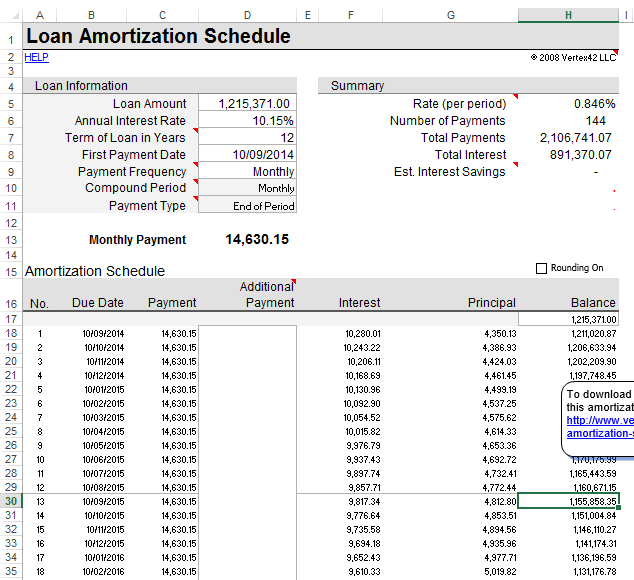 This question is most likely from India where the concept of equal monthly payments on a mortgage seems to be new and exciting and deserving of an acronym (EMI = equal monthly installment?) all to itself.

In many countries and many mortgage contracts, paying something over and above the EMI reduces the principal amount owed but does not relieve the borrower from paying the next month's installment when it is due, or the one after that, and so on. What happens instead is that the loan term effectively gets shortened because the loan gets paid off sooner. In India, in some mortgage contracts, the borrower apparently has the option of asking that the monthly payment be reduced instead. In this case, the borrower continues to make equal monthly payments that are smaller than before, and the loan gets paid off at the end of the agreed-upon term. Should a second extra payment be made later with the same parameters, the monthly payments would reduce again, but again continue (in equal installments of even smaller amounts) until the loan is paid off in full at the end of the term.

If the above is the correct description of how it works (perhaps @Dheer, who is far more knowledgeable about money matters in India than most everyone else here is, might chime in), then the calculation is relatively straightforward. Suppose that the EMI has value E currently, and that on the date that the EMI is due, the borrower pays E plus an additional amount T which is applied to reducing the principal still owed. If the EMI payment by itself would leave an amount P of principal still owing, then with the extra payment of T, the amount of principal still owing will be P-T. Consequently, the new reduced EMI will be

that is, the EMI is reduced by the factor (P-T)/P. The new reduced EMI F will be due on the same dates as the original payments, and the payments will continue till the loan is paid off at the end of the agreed-upon term.

For the specific dates that you have, just pretend that the payment of 6th October was made at the same time as the EMI payment that you will make on 10th October. From 10 November onwards, your reduced EMI will be smaller than INR 14631 by a factor of (P-80000)/P where P is whatever your amortization schedule shows as the principal still owed after the payment of 10 October (P = INR 1,151,004.84 and F = INR 13614.08 maybe?)

If you want to argue with the bank over the four days of interest, and insist that the reduced EMI start as of 10 October itself, go for it!

Here is another way to calculate the new monthly payment:

Not the answer you're looking for? Browse other questions tagged india interest home-loan compound-interest or ask your own question.

4
Mortgage loan plus home loan
2
Interest rate question
2
Tax exemption on home loan EMI in India
0
What is the formula for calculating the amount of money I end up with in a given period (salary and compounding effect)?
3
The penalty on early redemption of a personal loan
3
Calculating amortisation payment amount, where first payment date differs from loan start date
1
Home Loan Saver Account
2
Mortgage: Floating rate loan tenure extension on rate increase