I have been using the stochastic oscillator indicator to get some insight on particular stocks.

Below is an example of a 14-day lookup period for K where D is a calculated as a 3-day average of K.

So far, I have used this indicator on many stocks where I buy a shares if the stochastic (D) reads below 20 and there's an increase in volume (expecting the stock to go up) and in almost all cases the stock went down (90%+ of the time).

The Stochastic Oscillator seems to be a pretty solid indicator when used correctly, I wanted to see if anyone can provide some insight on whether I am using the stochastic indicator as intended and I am not missing any important steps.

I appreciate any advice. 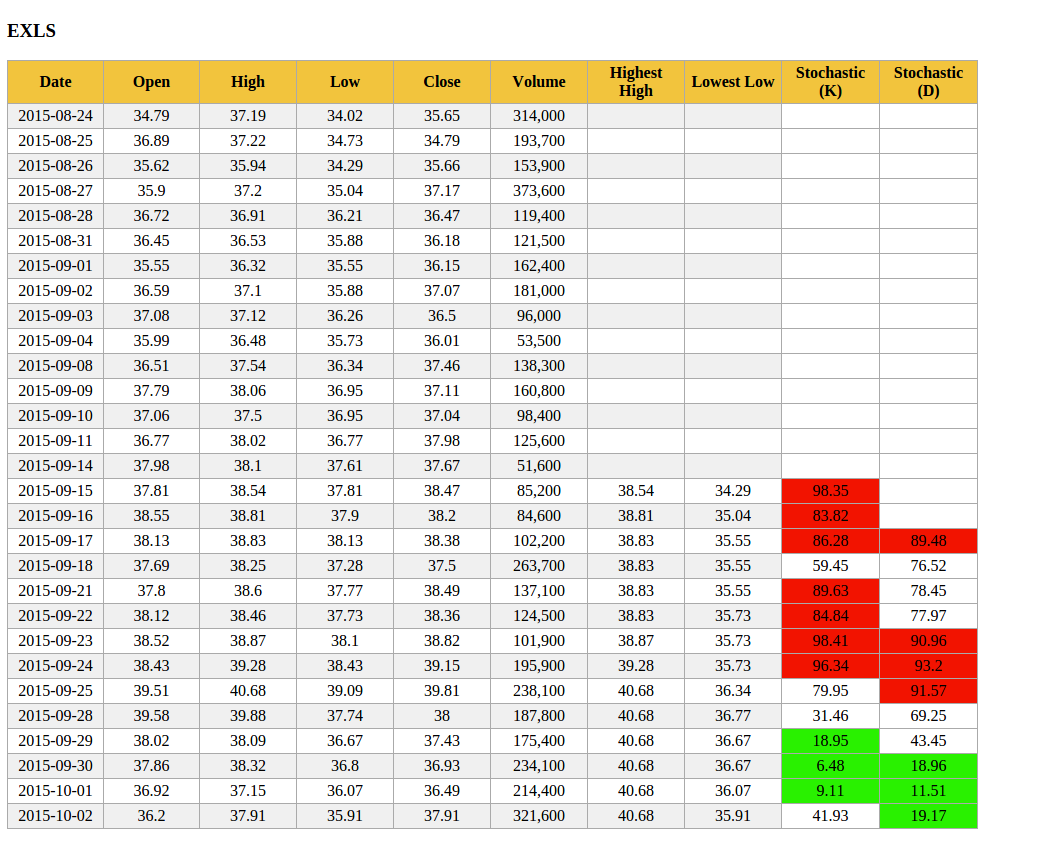 Below is a chart of a trade I recently took on GUD.AX using the Slow Stochastic in combination with support and resistance levels as well as a candlestick pattern. 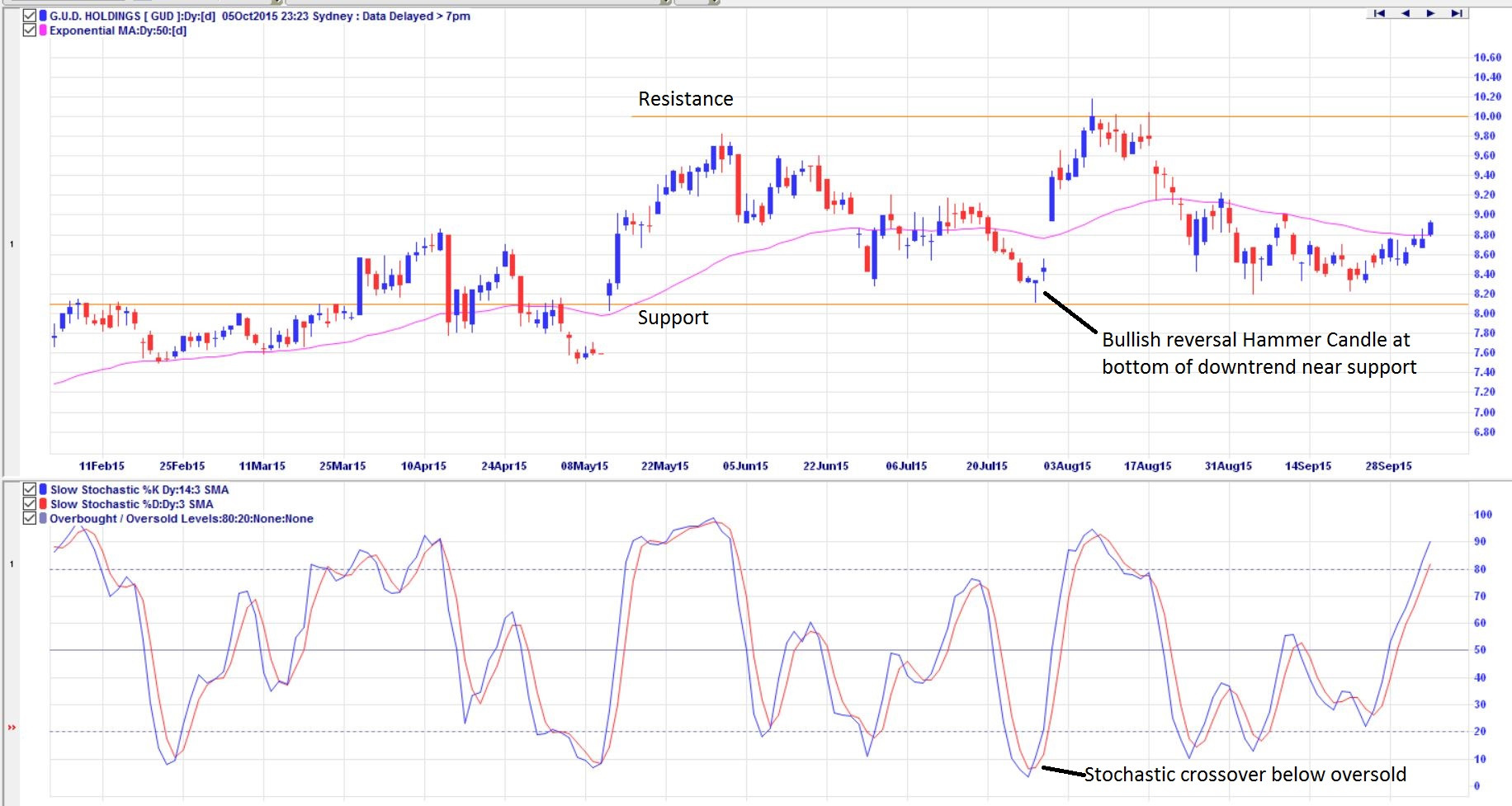 When I conducted my stock search on the evening of 28th July 2015, GUD was one of the results from the search that I particularly liked. The Slow Stochastic had just made a crossover in the oversold area just as the price was bouncing off its recent lows at the support line. But what I really like about this opportunity was that there was also a bullish reversal candle (a Hammer) at this short term market bottom.

The high for the day was $8.34, so I placed a stop buy order to buy the stock tomorrow if the price opened or moved above this high of today. So I would only buy if the stock hit or moved above $8.35 during the next days trading. So if the stock opened and stayed below the previous day's high I would not buy the stock and my order would be canceled at the end of the day. This is very important because it stops you from getting into trades that don't go in the direction you want. If this happens then you could check the chart again after market close to see if it is still worthwhile to place a new order for the next day.

On the 29th July 2015 the stock did open higher at $8.42 (which is where my order got executed) and closed at $8.46. So I ended up buying slightly above my target price but it did move higher on the day, so a successful entry overall. I had placed my initial stop loss at $8.09 (just below the low of the previous day of $8.10). If the trade had gone against me in the following days the most I would have lost was 1% of my total account capital. My target for this trade was $9.86 (just below the resistance line near $10), which would represent a 5% gain against my total account capital (or approx. 16.7% gain on the trade). So my win to loss ratio was 5:1.

As you can see from the chart, the next day gapped up at the open and prices continued moving up strongly during the day. The next day was a slightly negative day, and then a few days later, on the 5th August 2015 my target price of $9.86 was reached (with a high of $9.88 for that day), so my order was closed for a total profit of 16.7% on the face value of the trade. However, as I bought on margin (using CFDs) my actual profit on the initial margin I had invested was 167%. My total time in the trade was 7 days, and I spent about an hour in the evening doing my searches and placing my orders, then less than 10 minutes managing the trade each evening after market close.

The stock did go up a bit further after my profit target was reached, but the day after that the price started to fall as the price hit the resistance line and the Slow Stochastic did a crossover in the overbought area. Overall, this was a very ideal trade and I was very happy with it. Not all my trades reach my profit targets and I may get stopped out at a smaller profit or I might make a small loss (as I move my stops up as the price moves up).

The key to successful trading over the long term is to keep you losses small and let your profits run (with my longer term trend trading I don't have profit targets and let my profits run until I get stopped out, but with my shorter term trading I do use a profit target usually 5 or 6 times the size of my initial stop). If you have an average win to average loss ratio of 3:1 or higher and have a success rate of 50% winners you will make money over the long term.

While trading in stochastic I've understood, one needs reference (SMA/EMA/Bolinger Band and even RSI) to verify trade prior entering it. Stochastic is nothing to do with price or volume it is about speed. Adjusting K% has ability to turn you from Day trader to -> swing trader to -> long term investor. So you adjust your k% according to chart time-frame. Stochastic setup for 1 min, 5 min ,15, 30, 60 min, daily, weekly, monthly, quarterly, half yearly and yearly are all different. If you try hopping from one time-frame to another just because it is below oversold or above overbought region with same K%, you may get confused. Worst you may not square-off your loss making trade. And rather not use excel; charts gives better visual for oscillators.

Not the answer you're looking for? Browse other questions tagged stocks investing stock-analysis calculation technical-analysis or ask your own question.

2
How do I interpret this analysis from Second Opinion?
3
Potential pitfalls of this volume trading strategy
0
What kind of technical analysis and indicators available for mutual fund navs
14
Does the stock market create any sort of value?
1
Calculating the Free Cash Flow (FCF)
1
bid & ask prices and technical indicators
1
Correct interpretation of side-by-side graphs of intra-day fluctuations of stocks and bonds
6
If the future is already priced in, how does the average/non-professional person make profit at the stock market?