I have a figure that I want to adjust for inflation each month. I have monthly values for the UK Consumer Price Index but these are each for the change over the preceding 12 months.

If my base value is £100 in December 2012, how would I adjust this (in Excel/Numbers), both forward and backward each month? Is it possible with these 12-monthly figures?

In the style of the Bank of England's Inflation Calculator, you can do the calculation like so.

The third column is an index made from the inflation figures and the forth column shows the inflation-adjusted values. 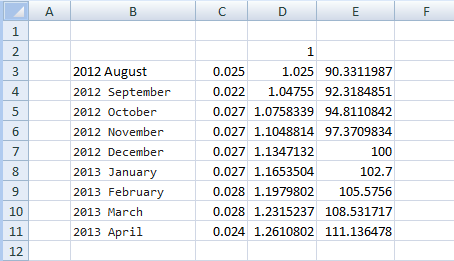 Using the index to calculate the difference in costs, for example:

The formulas used to produce the table above are shown below. 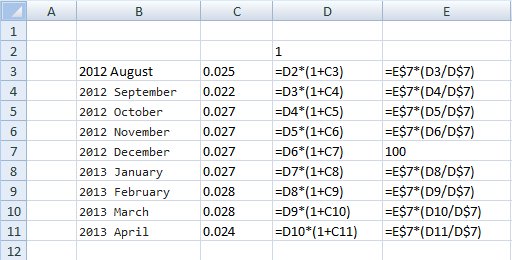 The actual increase in the cost of living for one month over the previous month cannot be calculated from the annualized increase in cost over the entire previous year.

Consider the hypothetical case of a very stable economy, where prices stay constant for decades. Nevertheless, the authorities issue monthly statements, reporting that the change in the cost of living, for the last month, year over year, is 0.00%. Then they go back to sleep for another month.

The economy returns to its customary behavior, except for that one-time permanent increase from August, 2001. So for the next eleven months, each month, the authorities compare the previous months prices to the prices from exactly a year ago, and announce that inflation, year over year, is still 10%.

Absolutely nothing happened in August 2002, yet the rate of inflation dropped from 10% to 0%.

6
What's the formula to calculate the monthly or lump-sum investment amount for a desired future value?
7
How does a monthly inflation rate work?
2
How can I figure out how much of a salary I need in the future, adjusting for inflation?
0
Why does adjusting for inflation work?
2
Is their a formula for calculating Future Value of a series of payments with monthly deposit but annual compounding?
2
How to calculate inter-annual variation of inflation for a 3 month period
2
Future value of loan: interest calculated daily and compounded at end of each calendar month