How much is inflation?

I'm sure it's different every year (and may even differ by country?), but surely there must be a minimum increase salaried workers would have to earn in order to simply break-even, relative to the inflation rate?

There is a thing called the consumer price index (CPI) There is a basket of goods that the people who keep the index basically shop for. It is much more detailed for the sake of accuracy, but bottom line is they shop for the same stuff each year. They measure the difference from year to year and that gives you a pretty good idea of inflation from a regular person point of view.

But it isn't without its faults, people bicker about the methodology and what constitutes the index.

To add to MrChrister's answer: Canada also has a Consumer Price Index (CPI) used to measure inflation that is distinct and separate from that maintained by the United States. There are differences in inflation between the U.S. and Canada because our currencies are different, and there may be different items in the "basket" of goods that constitutes the index.

You can find current information on the Canadian CPI at Statistics Canada, here: Latest release from the Consumer Price Index.

Also, the Bank of Canada – our central bank – maintains a free online Inflation Calculator. The BoC's inflation calculator is handy because you can enter a dollar amount for a past date and it will figure out what that would be in today's dollars. For instance, $100 in 1970 dollars had the same purchasing power (under the CPI) as $561.76 in 2009 dollars!

And you're right – if you get a salary increase that is less than the rate of inflation, then in theory you have lost purchasing power. So, anybody really looking for a raise ought to make an effort to get more than the increase in CPI. Of course, some employers are counting on you not knowing that, because any increase that's less than CPI is effectively a salary decrease; which could mean more profit for them, if they are able to increase their prices / revenues at inflation or better.

Finally, consider that salary & wage increases also contribute to inflation! Perhaps you've heard of the wage/price inflation spiral. If you haven't, there's more on that here and here.

FYI...prices don't always go up. Inflation is a monetary phenomenon. I'm simplifying greatly here: if more money is printed (or the money supply increases through fractional reserve banking) and it is chasing the same amount of goods then prices will go up. Conversely, if money is held constant and the economy becomes more productive, producing more goods, then a constant amount of money is chasing an increasing amount of goods and prices go down.

After the Civil War the greenback went back to being on a gold standard in 1879. After 1879 greenbacks could be redeemed for gold. Gold restricts money growth since it is difficult to obtain. 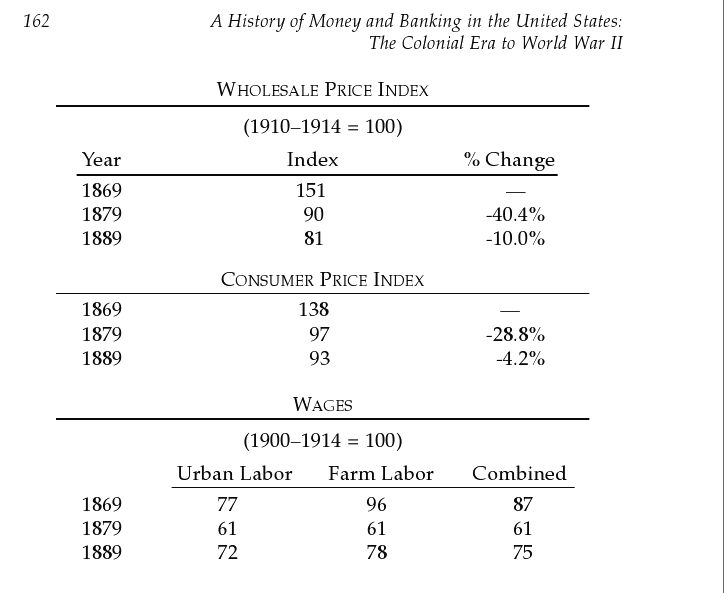 Notice from 1879 to 1889 that wholesale and consumer prices fall but wages start to increase. Imagine your salary staying the same (or even increasing) but the prices of items falling.

Still don't think inflation is a monetary phenomenon? Here is a CPI chart from 1800 to 2007: 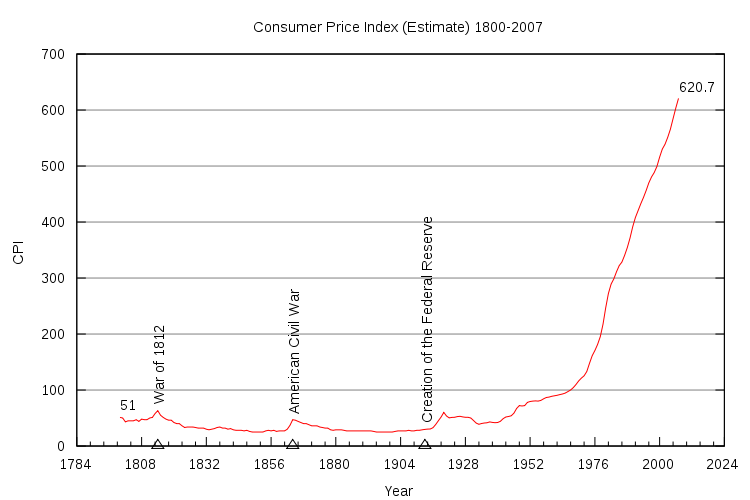 Notice how the curve starts to go drastically up around 1970. What happen then? The US dollar went off the gold-exchange standard and the US dollar became a purely fiat currency backed by nothing but government decree which allows the Federal Reserve to print money ad nauseum.

Here is an excerpt from his webpage ( http://web.mit.edu/krugman/www/howfast.html ):

"With the decline of the traditional extended family, in which relatives were available to take care of children at need, many parents in the United States have sought alternative arrangements. A popular scheme is the baby-sitting coop, in which a group of parents agree to help each other out on a reciprocal basis, with each parent serving both as baby-sitter and baby-sittee. Any such coop requires rules that ensure that all members do their fair share. One natural answer, at least to people accustomed to a market economy, is to use some kind of token or marker system: parents "earn" tokens by babysitting, then in turn hand over these tokens when their own children are minded by others. For example, a recently formed coop in Western Massachusetts uses Popsicle sticks, each representing one hour of babysitting. When a new parent enters the coop, he or she receives an initial allocation of ten sticks.

This system is self-regulating, in the sense that it automatically ensures that over any length of time a parent will put in more or less the same amount of time that he or she receives. It turns out, however, that establishing such a token system is not enough to make a coop work properly. It is also necessary to get the number of tokens per member more or less right. To see why, suppose that there were very few tokens in circulation. Parents will want on average to hold some reserve of tokens - enough to deal with the possibility that they may want to go out a few times before they have a chance to babysit themselves and earn more tokens. Any individual parent can, of course, try to accumulate more tokens by babysitting more and going out less. But what happens if almost everyone is trying to accumulate tokens - as they will be if there are very few in circulation? One parent's decision to go out is another's opportunity to babysit. So if everyone in the coop is trying to add to his or her reserve of tokens, there will be very few opportunities to babysit. This in turn will make people even more reluctant to go out, and use up their precious token reserves; and the level of activity in the coop may decline to a disappointingly low level.

The solution to this problem is, of course, simply to issue more Popsicle sticks. But not too many - because an excess of popsicle sticks can pose an equally severe problem. Suppose that almost everyone in the coop has more sticks than they need; then they will be eager to go out, but reluctant to babysit. It will therefore become hard to find babysitters - and since opportunities to use popsicle sticks will become rare, people will become even less willing to spend time and effort earning them. Too many tokens in circulation, then, can be just as destructive as too few." -- Paul Krugman, 1997 (accessed webpage 2010).

Not the answer you're looking for? Browse other questions tagged inflation salary salary-increase raise or ask your own question.

42
Is inflation a good or bad thing? Why do governments want some inflation?
12
How much would be a fair raise or salary increase to ask for at work?
5
How to translate old price amounts to their modern day equivalents?

6
Is the average wage a reliable measure for how much the average person earns?
0
The meaning of “annual salary”
3
Economics of buy-to-let (investment) flats
2
Paycheck Questions
1
How to reach an apt going against inflation
7
How does a monthly inflation rate work?
4
Future value of a compound-interest savings account when contributions are inflation linked
5
Calculating salary loss from inflation
1
Is storing money in a bank the best way to utilise your savings?
2
Estimating nest egg and inflation