The eminently useful New York Times Buy or Rent calculator assumes a 3% average annual rise in home prices. Curious whether that value made sense, I did some research and came across the views of Robert Shiller, creator of the Case-Shiller index for real estate. He apparently argues that home prices tend to return to their 1890 prices.

Is there some credence to the belief that real estate prices tend to rise over the long term? Or, is this really just a widespread myth, as Shiller argues?

Obviously this greatly effects personal finance calculations because the rate of growth in housing prices is one of the main factors effecting the buy or rent decision, from a purely financial perspective.

Several people have mentioned the obvious: inflation. But let's assume we are talking about real (inflation adjusted) prices.

One argument is that populations keep rising while the land does not change. So the price of homes in desirable places gets pushed up and people move to second-best locations, pushing those prices up, etc. Similar Malthusian argument holds for raw materials (steel, granite, fine wood, etc.).

Another argument is that the economy has a long-term upward trajectory (that's the assumption). So each generation, as a whole, has more disposable real income than the previous. As disposable income increases, people tend to put more and more money into their homes, pushing prices up. True for all goods, of course, but it may be more true for real estate than for other types of goods.

The Shiller data is inflation adjusted. In effect, a flat line means that long term, housing rises with inflation, no more no less. There's no argument, just the underlying data to support his charts. This, among them. 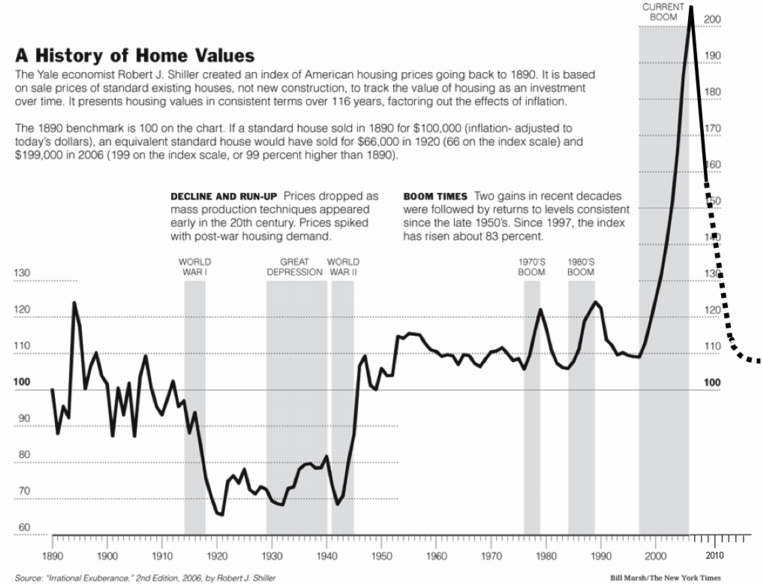 As much as I respect Nobel Prize winning Robert Shiller, his approach and analysis of the boom ignored interest rates. Say we look at a $50K earning couple. This is just below median income. At 9%, they qualify to borrow $145K. As rates fell to 4%, they qualify for $244K. Same fixed 30 term. Ignoring all other factors, the swing in rates will generate an oscillation around the long term trend. And my own data crunching suggests the equilibrium median home price will tend toward the price supported by the median income.

A similar, but not identical question - Why can't house prices be out of tune with salaries?

In response to Chan-Ho's comment - I'd imagine Shiller understood the interest impact. To clarify, the chart, as presented, ignores it.

It is supported by inflation and historical values. if you look at real estate as well as the stock market they have consistently increased over a long period of history even with short term drops. It is also based on inflation and the fact that the price of land and building material has increased over time.

16
Why can't house prices be out of tune with salaries

9
What investments are positively related to the housing market decline?
3
What evidence is there that rising interest rates causes Canadian condo prices to go down?
3
As a Canadian, what should I invest in if I'm betting that the Canadian real estate will crash?
6
Leasehold Pub— What happens at the end of the lease term?
3
How high does the buy-to-rent ratio have to be to make renting cheaper over the long term?