Is there any real purpose in purchasing bonds?

I am new to investing, for the most part, and I have learned a decent amount about how bonds work. What I wish to know more of is simple: Is there any real profit to it, and is it worth it?

From the face of it, it seems like it's not worth it for a few reasons I can think of:

1.If I give you money and I'm promised for it to be paid back over a period of time, I have a negative over the issuing of the bond; I lost money and have to wait to get it back. The real problem not just lies there, but the problem lies in how much more on top of that am I getting back in a period of time and is it worth giving a fixed investment to wait many years for profit?

2.Even if the bond issuer pays back the money plus more due to interest, isn't it a debate over profit-over-time benefit? Basically, not everyone wants to wait 10 years to earn $60.00 extra.

3.You can't technically sell bonds as stocks because bonds can only be re-sold to the same issuer, or to another person who wishes to be bound by the same issuing indebtedness.

4.Bonds are almost exactly like savings accounts, minus the fact that you don't directly pay the bank to obtain savings. Over time, your money grows due to interest, but the bank is probably making thousands of times more as you're making 2% per year based on what you have. If I have $100.00 in the bank, I am only making 2% of that per year? I could find more money in a fountain in one afternoon than bothering with a savings account. In short, it's usually no good.

5.The value you give helps the issuer more than what your return is worth 99.9% of the time, especially when considering profit-over-time benefits, risks, and up front costs.

6.Long-term money accrual is the worst financial instrument available. Instead of profiting, you have to wait a unspecified amount of time, usually years, before any substantial profits may show their worthwhile time as per profit-over-time margin. Basically, unless you have giant investments and are given great returns and have lengthy amounts of bonds and other securities, it's most likely assured that your time and profit are scarce and worthless overall.

Here are my reasons as to why bonds are considered to be a reasonable investment.

While it is true that, on average over a sufficiently long period of time, stocks do have a high expected return, it is important to realize that bonds are a different type of financial instrument that stocks, and have features that are attractive to certain types of investors.

The purpose of buying bonds is to convert a lump sum of currency into a series of future cash flows. This is in and of itself valuable to the issuer because they would prefer to have the lump sum today, rather than at some point in the future. So we generally don't say that we've "lost" the money, we say that we are purchasing a series of future payments, and we would only do this if it were more valuable to us than having the money in hand. Unlike stocks, where you are compensated with dividends and equity to take on the risks and rewards of ownership, and unlike a savings account (which is much different that a bond), where you are only being paid interest for the time value of your money while the bank lends it out at their risk, when you buy a bond you are putting your money at risk in order to provide financing to the issuer.

While the returns being offered may not seem attractive to you individually, it is not reasonable to say that the returns offered by the issuer are insufficient in general, because both when the bonds are issued and then subsequently traded on a secondary market (which is done fairly easily), they function as a market. That is to say that sellers always want a higher price (resulting in a lower return), and buyers always want to receive a higher return (requiring a lower price). So while some sellers and buyers will be able to agree on a mutually acceptable price (such that a transaction occurs), there will almost always be some buyers and sellers who also do not enter into transactions because they are demanding a lower/higher price. The fact that a market exists indicates that enough investors are willing to accept the returns that are being offered by sellers.

Bonds can be helpful in that as a class of assets, they are less risky than stocks. Additionally, bonds are paid back to investors ahead of equity, so in the case of a failing company or public entity, bondholders may be paid even if stockholders lose all their money. As a result, bonds can be a preferred way to make money on a company or government entity that is able to pay its bills, but has trouble generating any profits. Some investors have specific reasons why they may prefer a lower risk over time to maximizing their returns. For example, a government or pension fund or a university may be aware of financial payments that they will be required to make in a particular year in the future, and may purchase bonds that mature in that year. They may not be willing to take the risk that in that year, the stock market will fall, which could force them to reduce their principal to make the payments. Other individual investors may be close to a significant life event that can be predicted, such as college or retirement, and may not want to take on the risk of stocks. In the case of very large investors such as national governments, they are often looking for capital preservation to hedge against inflation and forex risk, rather than to "make money".

Additionally, it is important to remember that until relatively recently in the developed world, and still to this day in many developing countries, people have been willing to pay banks and financial institutions to hold their money, and in the context of the global bond market, there are many people around the world who are willing to buy bonds and receive a very low rate of return on T-Bills, for example, because they are considered a very safe investment due to the creditworthiness of the USA, as well as the stability of the dollar, especially if inflation is very high in the investor's home country. For example, I once lived in an African country where inflation was 60-80% per year. This means if I had $100 today, I could buy $100 worth of goods, but by next year, I might need $160 to buy the same goods I could buy for $100 today. So you can see why simply being able to preserve the value of my money in a bond denominated in USA currency would be valuable in that case, because the alternative is so bad. So not all bondholders want to be owners or make as much money as possible, some just want a safe place to put their money.

Also, it is true for both stocks and bonds that you are trading a lump sum of money today for payments over time, although for stocks this is a different kind of payment (dividends), and you only get paid if the company makes money. This is not specific to bonds. In most other cases when a stock price appreciates, this is to reflect new information not previously known, or earnings retained by the company rather than paid out as dividends. Most of the financial instruments where you can "make" money immediately are speculative, where two people are betting against each other, and one has to lose money for the other to make money. Again, it's not reasonable to say that any type of financial instrument is the "worst". They function differently, serve different purposes, and have different features that may or may not fit your needs and preferences.

You seem to be saying that you simply don't find bond returns high enough to be attractive to you. That may be true, since different people have different investment objectives, risk tolerance, and preference for having money now versus more money later. However, some of your statements don't seem to be supported by facts. For example, retail banks are not highly profitable as an industry, so they are not making thousands of times what they are paying you. They also need to pay all of their operating expenses, as well as account for default risk and inflation, out of the different between what they lend and what they pay to savings account holders. Also, it's not reasonable to say that bonds are worthless, as I've explained. The world disagrees with you. If they agreed with you, they would stop buying bonds, and the people who need financing would have to lower bond prices until people became interested again. That is part of how markets work. In fact, much of the reason that bond yields are so low right now is that there has been such high global demand for safe investments like bonds, especially from other nations, such that bond issues (especially the US government) have not needed to pay high yields in order to raise money.

You ask a question, "Is there any real purpose in purchasing bonds?" and then appear to go off on a rant. Before the question is closed by members here, let me offer this: 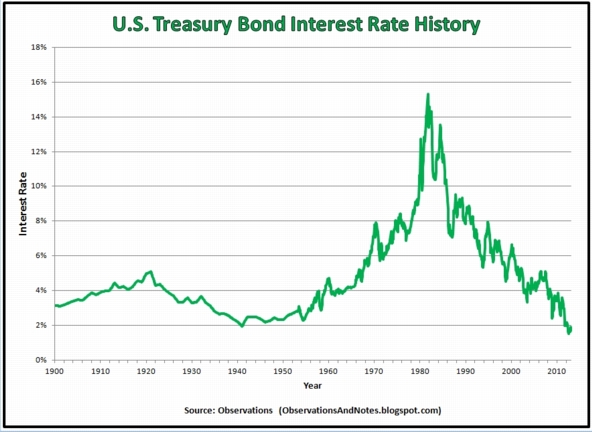 This chart reflects the 10 year bond rate. From 1960-2004 (give or take) the coupon rate was over 4%. Asset allocation suggests a mix of stocks and bonds seeking to avoid the risk of having "all of one's eggs in one basket." To that end, the simplest approach is a stock/bond mix. Over time, a 70/30 mix provides nearly 95% of the long tern return, but with a much lower volatility.

I'm not going to suggest that a 2% 10 year bond is an exciting investment, but bonds may have a place in one's portfolio. I'm not going to debate each and every point you attempted, but #5 is especially questionable. If you feel this is true, you should short bonds. Or you should at least 99% of the time. Do you have data to back up this statement?

Not the answer you're looking for? Browse other questions tagged investing bonds rate-of-return profitability or ask your own question.

3
Holding bonds through maturity--pros and cons
5
Bond ETFs vs actual bonds
1
When to buy and sell bonds
2
What are the chances of receiving interest when purchasing NS&I Premium Bonds in the UK?
7
Are bonds worth the investment since they don't compound?
1
Bonds, interest rates and inflation
4
If Turkey doesn't go bankrupt, is there any chance they won't pay bonds profits?
0
Why would an issuer redeem a callable bond in the event of low interest rates?
0
Question about bonds yield to maturity
2
Are credit ratings of credit rating agencies per bond or per issuer? What about CDS?