Net Cash Flows from Selling the Bond and Investing

I am a beginner finance student, i am having trouble understanding short sale.In this context the bond is priced at 960.00 and will give a future payment of 1000 1 yr from the day it was bought. 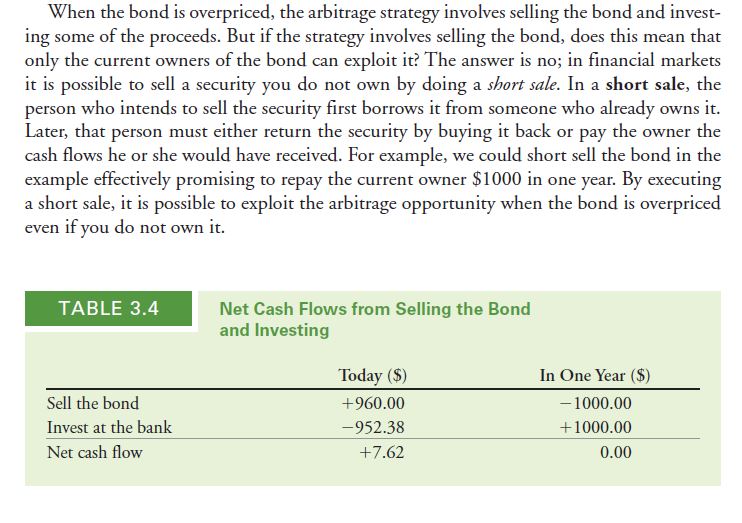 I don't quite understand how one can obtain arbitrage profit if he or she does not own the security.Could someone tabulate the strategy to help me understand this ?

Any help is greatly appreciated ! Thanks

Investopedia has a good explanation of the term shorting which is what this is. In the simplest of terms, someone is borrowing the bond and selling it with the intent to replace the security and any dividends or coupons in the end. The idea is that if a bond is overvalued, one may be able to buy it back later for a cheaper price and pocket the difference. There are various rules about this including margin requirements to maintain since there is the risk of the security going up in price enough that someone may be forced into a buy to cover in the form of a margin call.

If one can sell the bond at $960 now and then buy it back later for $952.38 then one could pocket the difference. Part of what you aren't seeing is what are other bonds doing in terms of their prices over time here. The key point here is that brokers may lend out securities and accrue interest on loaned securities for another point here.

Not the answer you're looking for? Browse other questions tagged investing bonds investment-strategies or ask your own question.

5
Where should I be investing my money?
7
What is the best, low risk investment I can make now?
1
How to calculate internal rate of return [beginner]
2
How do you compare two ETF's that follow the same index
8
What strategy to use if I want to sell a stock, and have a lot of time
4
How can I practically buy bonds?
0
How do speculators make profit?
0
What does it mean to short a futures contract?
1
Calculate annual growth when there are multiple deposits