What is a “spread” in commodities futures?

I was reading an article and it states

The focus point this time around is the December-January spread (CMALZ4-F5), which flared into $25 per tonne backwardation late last week.

That was acute enough to pull the full benchmark cash-to-three-months period into the widest backwardation since December 2012.

Also, what does "cash-to-three-months period into the widest backwardation" mean?

The aluminum generally trades in contango, meaning that the longer the maturity of the future contract (i.e. the farther in the future the delivery date) the more expensive the contract. A simple explanation is that to deliver aluminum to you in 5 years, I need to buy the aluminum now at whatever the current price is and store it for 5 years, which has a cost.

However at the end of October the maturity curve looked like this: 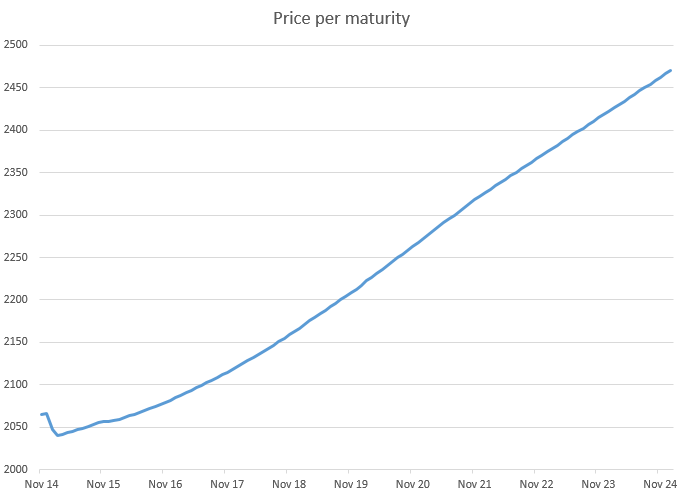 So although the long term trend was in line with theory there was a local anomaly and the January 15 contract closed at $ 2047 /MT vs. $ 2066 /MT for the December 14 contract. The spread in that context is simply the price difference between the two contracts. According to the article the spread went as high as $25 intraday.

The "cash-to-three-months benchmark" is the spread between the spot price and the 3 month future contract.

For non seasonal commodities, that kind of anomaly is generally due to a local shortage of supply which makes getting the product sooner more difficult.

Wikipedia has more on backwardation and contango.

Not the answer you're looking for? Browse other questions tagged futures commodities contango backwardation or ask your own question.

8
Does a high demand for long commodities Futures push up the underlying spot price?
2
How does investing in commodities/futures vary from stocks?
4
How to invest (trade, or speculate) in commodities?
2
Confused about eurodollar futures
5
Why do commodities futures prices have “-” in them
2
Why are there futures for some commodities but not others?
0
Oil Futures and Prices
1
How does producer and manufacturers trade commodity futures?
1
Oil futures price convergence