Why do stocks tend to trade at high volumes at the end of (or start) the trading day?

Not related to this question, I am asking why stocks seem to be traded at very high volumes right at the start and end of the trading day. Is this because these graphs factor in all of the premarket and postmarket trades? 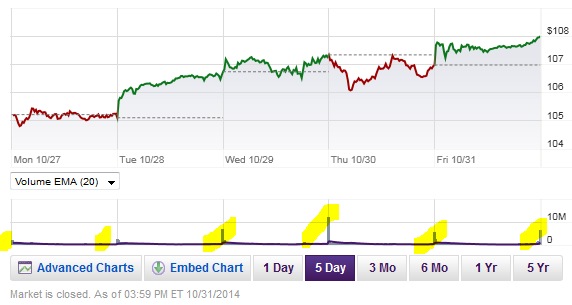 Trading at the start of a session is by far higher than at any other time of the day. This is mostly due to markets incorporating news into the prices of stocks. In other words, there are a lot of factors that can affect a stock, 24 hours a day, but the market trades for only 6.5 hours a day. So, a lot of news accumulates during the time when people cannot trade on that news. Then when markets finally open, people are able to finally trade on that news, and there is a lot of "price discovery" going on between market participants.

In the last minutes of trading, volumes increase as well. This can often be attributed to certain kinds of traders closing out their position before the end of the day. For example, if you don't want to take the risk a large price movement at the start of the next day affecting you, you would need to completely close your position.

Trading at the start of the day is highest because of news flows that may have come after the close of the previous day.

And trading at the end of the day is highest because of expected news flows after closing hours.

Moreover, there are many day traders who buy in the morning without making any payment for purchase and such traders have to sell by evening or else they will have to make the payment for the purchases which they have made.

The shift to trading at the close began in 2008. Traders did not want to be caught off guard by surprise news and there was a lot of volatility during the financial crisis, so they would close their position in the evening.

Thats how it began. There are two reasons why it sticks around. First, there has been an increase usage of index funds or passive funds. These funds tend to update their positions at the end of the day. From the WSJ:

Another factor behind the shift has been the proliferation of passively managed investments, such as index funds. These funds aim to mimic an index, like the S&P 500, by owning the shares that comprise it. Index funds don’t trade as often as active investors, but when they do, it is typically near the market close, traders say. That is because buying or selling a stock at its closing price better aligns their performance with the index they are trying to emulate.

The second reason is simply that volume attracts volume. As a result of whats mentioned above, you have a shift to end of day trading, and the corrolary to that is that there is a liquidity shortage from 10am to 3pm. Thus, if you want to buy or sell a stock, but there are few buyers or sellers around, you will significant move the price when you enter your order. Obviously this does not affect retail traders, but imagine hedge funds entering or closing a billion dollar position. It can make a huge impact on price. And one way to mitigate that is to wait until there are more market participants to take the other end of your trade, just as at the end of the day. So this is a self-reinforcing trend that has begun in the markets and will likely stick around.

Is it possible that mutual funds account for a significant portion of this volume. Investors may decide to buy or sell anytime within a 24 hour period, but the transaction only happened at the close of the market. Therefore at 3:59 pm the mutual fund knows if they will be buying or selling stocks that day.

As nws pointed out the non-market hours are longer and therefore accumulate more news event. Some financial news is specifically given during the time the market is closed. Therefore the reaction to that news has to either be in the morning when the market opens or in the late afternoon if they are trying to anticipate the news.

Also in the US market the early morning trader may be reacting to European market activities.

Trading volumes are higher at the end of the day as many traders close their open positions. In the morning however, traders incorporate various factors like performance of worldwide markets overnight, any corporate or government announcements, global macro events, etc.

Not the answer you're looking for? Browse other questions tagged stocks trading trading-volume or ask your own question.

10
Why is the volume highest at the beginning and end of a trading day?

10
Why is the volume highest at the beginning and end of a trading day?
0
Is 6% too high to trade stocks on margin?
49
Why is day trading considered riskier than long-term trading?
3
How much time should be spent on Penny Stocks Trading a day?
0
Don't Dark Pools affect the correct price discovery of certain securities?
1
Why do banks park their money at the european central bank instead of buying stocks?
1
Viability of day trading stocks without using charts
3
Taxes on stocks/cryptocurrency day trading