Comparing HDHP vs PPO Plans: Am I missing something?

It's that time of year at work that we're needing to renew our insurance carrier. HR decided to continue the two PPO plans we previously had available, while adding an HDHP + HSA plan. I've compared the two plans using an online tool, and to my surprise the HDHP seems to be better in all cases (except for a very tiny spot around $6000 of expenditures). How can this be? I would expect an HDHP to more risky, and therefore always include the possibility that you're out more money than with a "safer" plan. It's also worth noting that your total out of pocket expenses are always higher with our low deductible PPO than with the higher deductible PPO.

The following image shows data used for a family plan. I plugged in numbers for a single person, and there was a large area where the HSA was still cheaper than the PPO options (at approximately < $5000 or > $10000). Am I missing something here, or is it truly better to use the HSA in almost every situation? 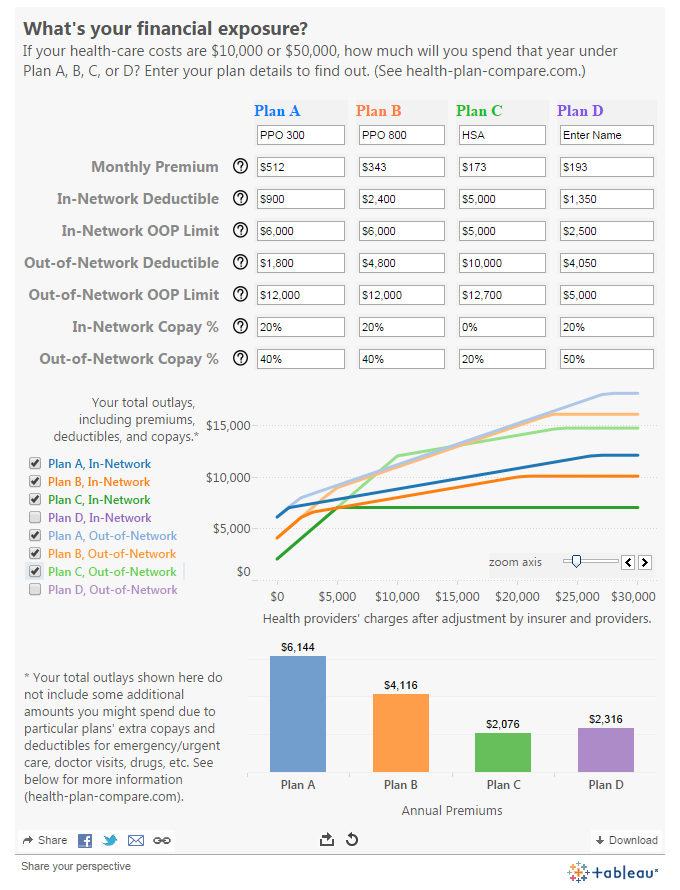 Here are the exact details of the plans. 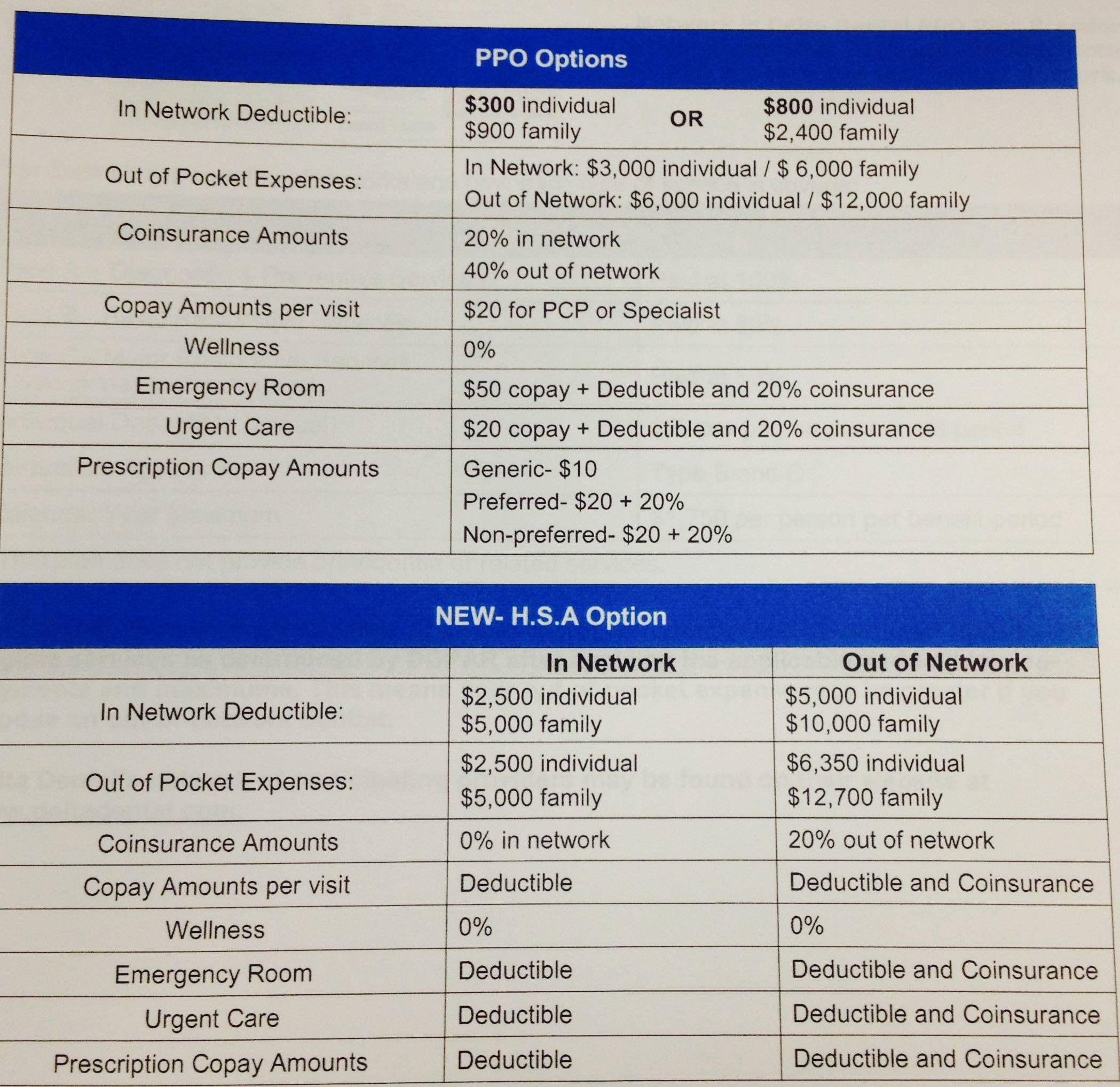 There are a couple of things that are missing from the analysis.

In order to compare these and figure out what is best for you, you'll need to make some guesses and run the numbers. Here is how you might do that.

First, let's compare the premiums that you would pay over a year (we'll assume family coverage, since those are the numbers that you provided):

So if you don't have any medical expenses for the entire year, Plan C is the clear winner.

Now, let's look at the opposite end of the spectrum. Let's say that something big happens, and you are hospitalized for a while. Here is where you might hit your out-of-pocket maximums. Remember that with the HDHP, you can pay for your out-of-pocket expenses with an HSA, which means you can pay with money that was deducted with your income taxes. We'll say you are in the 25% tax bracket for this discussion. We'll also say that all your health care was in-network, for simplicity. Here is the maximum you would pay, under each plan:

Clearly, at the high end, Plan C is also the winner. In fact, with our 25% tax savings by using the HSA, the Plan C maximum is less than the Plan A premiums.

So what happens between these two extremes?

Let's now look at another scenario. Let's say that you end up having a smaller procedure done over the next year (something without a copay), and your medical expenses have totaled $5,000. Under the PPO plans, you have a smaller deductible, but you have to pay 20% of everything after that deductible. With the HDHP plan, you have a high deductible, but after you've hit it, you don't need to pay another penny.

After we've paid our bills for the year, here is what we have paid under each plan:

Here you can see that Plan C is the winner again. Any spending above this $5000 amount will get progressively worse for the PPO plans, since at this point, you are done paying with the HDHP plan, but you still have quite a ways to go with the PPO before you hit your out-of-pocket maximum. And if you try a few things in the other direction, you'll quickly see that, due to the 25% tax savings enjoyed by the HSA user, Plan C wins with less expenses as well.

So far, we've seen Plan C win everything we've tried. However, let's say that your family doesn't have any major health issues over the next year, but you have more normal medical expenses, which are covered by the PPO's copays. Here are some assumptions I'll make for the discussion. We'll say that we have a family of four, and each person ends up going to the doctor once, the dentist twice ($80 a visit), and let's say that someone in your family has a $30 a month prescription. We'll also put you in the 25% tax bracket, and ignore state taxes.

For a PPO plan, the doctor visits are only $20 each. (We'll put them at $100 each normally.) The prescriptions will only cost you $22 with the PPO plan. The dentist isn't covered by your insurance, so you'll need to pay that either way. And don't forget that anything you pay out-of-pocket can be payed for out of your HSA, at a 25% tax savings.

With this situation, here is what you would pay for the year:

To be fair, there are scenarios where you would come out ahead with one of the PPO plans. (For example, a high prescription bill, as mentioned in @keshlam's answer.) If we take the dentist out of the equation, add some more doctor's office and ER visits, and hike up the prescriptions costs, we can get the PPO plan to look better. You'll have to use your own numbers and figure out what will work for you.

This really depends on your usage. I went with the High Dedux and HSA option this year... and discovered that until I'd hit the deductable, I didn't get any of the prescription drug discounts. If you're on an expensive maintenance med, that can be serious sticker shock (difference of 20 times!). Of course the HD plan also has lower premiums which more or less cover the deductable, and the HSA can be used to pay for some of the deductable... so this is really a matter of running the numbers based on your own health history, your own ability to keep money free to "self-insure" with, and how much you detest paperwork.

Not the answer you're looking for? Browse other questions tagged united-states health-insurance hsa hdhp or ask your own question.

12
Can I afford to take this job's high-deductible health care plan?
5
Is this HSA too good to be true?
5
HSA eligibility when with employer plans
2
Does the benefit of a HDHP with an HSA disappear if the premium is the same as a PPO plan
4
Should I pick a company paid premium or company paid deductible health insurance plan?
2
Choosing between an HSA and PPO
3
ACA and HSA question - seems HSA policies are a lot more expensive in premium and out of pocket
3
Choosing between Tradtional PPO and HDHP with high prescription cost
2
Why would anyone choose this PPO over PPO HSA?

5
Is this HSA too good to be true?
1
Dual coverage and HSAs
9
Why do HSA qualifying plans have a max deductible?
7
Switch from HSA/Limited FSA to FSA only
2
Pros/Cons of individual HDHP HSA's versus family HDHP HSA?
5
HSA eligibility when with employer plans
3
Choosing between Tradtional PPO and HDHP with high prescription cost
2
Moving from Family HDHP/HSA, to individual HDHP/HSA and individual FSA?
4
Why does federal law only allow HSA contributions if you have a HDHP?
2
Does the benefit of a HDHP with an HSA disappear if the premium is the same as a PPO plan