Rental Property: What is considered decent cash flow? (with example)

I'm looking into buying my first rental property in Syracuse, NY. I'm looking at this one: http://www.zillow.com/homedetails/317-Wellesley-Rd-Syracuse-NY-13207/31678383_zpid/ 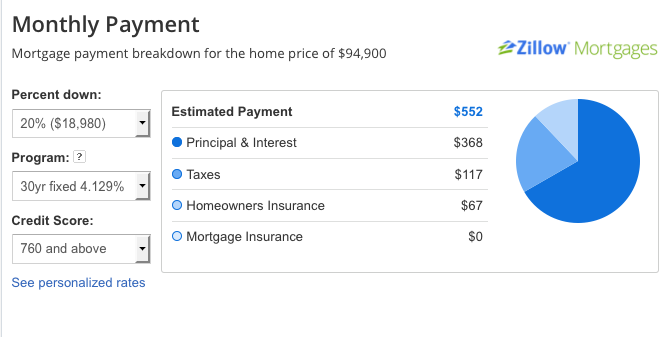 Multiple agents have told me that it's a safe neighborhood. It's also close to Syracuse University and some other public schools, which I like. One agent said it can rent for $1200, but I think that's overshooting it so lets say rent could amount to $1100 just to be conservative.

Another agent also said Syracuse has a weird taxing system, so monthly taxes are around $400 a month (isn't this ridiculously high?). So $4800 a year on taxes. But according to Syracuse city's website, it's only $2000 per year? http://ocfintax.ongov.net/ImateSYR/taxdata.aspx?p=aHR0cDovL29jZmludGF4Lm9uZ292Lm5ldC9TeXJhY3VzZVRheERhdGEvc3lyYWN1c2V0YXhkYXRhLmFzcHg%2fc3dpcz0zMTE1MDAmc2JsPTA3OTAwMDAwMjIwNzUwMDAwMDAw

So I think the taxes Zillow is showing is lower than the actual taxes. So I'll revise Zillow's tax estimates to $400, which makes the Estimated Payment: $835.

Is that considered a poor investment? $200 doesn't sound like much. Let me know your thoughts. This is my first time doing this so forgive my ignorance.

Disclosure - I am a Realtor. That said, I wouldn't trust anyone to tell me anything I can look up myself. Even here, SE, you'll see a good number of answers containing a link to IRS docs, as if to say, "here's the answer, and here's the source." $4800/yr tax on a sub $100K house?

Wow - Municipality of City of Syracuse shows that crazy rate to be true. And from Syracuse.com The tax rate for the village of East Syracuse is $15.22 – the highest for all villages in Central New York and 16th among villages in the state. Add to that school, county and town taxes and the total rate for village homeowners is $46.70.

On to the rest of the question - There is a real estate blog, Bigger Pockets, where experienced investors advise to allow 50% of rent in your expense forecast. This includes vacancy, repairs, damage, replacement of furnace, roof, etc. But not the mortgage.

So, if I buy a $100K house and rent for $1100, I look at $6600 as available to pay my mortgage. In that case, a 4.5% loan leaves me with $2100/yr. But, the 50% expense includes taxes, and in your case, they are so disproportionate, your expenses are higher than this. The deal as you describe it is not profitable from that cursory analysis. Do some research to price out a decade of replacement and repairs. Roof, furnace, AC unit, all appliances. Typically, you should plan for an empty month each year. You may have a tenant last a decade, or 3 years of single year tenants, with a month empty at a minimum. A change of tenant will often mean painting. DIY is great but a painter will set you back quite a bit depending on the local economy. Your $780/year repair estimate is too low by a factor of 4-5, in my opinion. I am in my house 20 years. A big one, so scale this down - $4K every five years for painting the outside. $10K for a new roof, $3K for an AC compressor. Brand new, a house can have a good run, a decade of little expense. But an existing house will quickly need these things repaired or replaced.

A couple of points others did not bring up or dwell on:

A couple of things to keep in mind: Sure, many months the maintenance will be $0. But every now and then you will have a big maintenance bill. A few months ago the main water line to my rental property broke, and replacing it cost $3,000. That required digging up the front yard with a back hoe, something I was not going to do myself. A few months before that I had to replace a door: $500. Etc.

You can get bogged down with trivial things from your tenants. I had a new tenant move in and complain that the water heater wasn't working. I sent a plumber to check on it. The knob on the water heat was set to "low", all he had to do was turn the knob. Bill to me: $95. I don't blame the plumber: he had to drive out there, figure out that that was all the problem was, and drive back.

If you're comparing to what you spend maintaining your own house, remember, tenants don't worry as much about taking good care of the place as someone who owns it. Because they don't own it. Who cares? If they abuse something and it wears out or breaks, they call the landlord to fix it.

BTW Hopefully the property will appreciate over time, but in the present market, I wouldn't count on it. Value of my rental property is less than it was when I bought it 14 years ago.

Also, the real question is comparing the profit on the property to what you could make if you invested the money elsewhere. Forgetting a mortgage for the moment, if you spent $100,000 cash to buy a property and had a net profit of $2,000 per year, plus appreciation of $1,00 per year, that's 3% profit. If you instead bought $100,000 worth of stock, would you likely make more than 3%? My numbers are just made up, but that's the relevant calculation.

I had a tenant who did $10,000 worth of damage, plus they stole the refrigerator, the oven, and the water softener. Sure, I sued them and won. (A default judgment -- they didn't bother to show up to court to defend themselves.) But they don't have any money, and they have never given me a dime of that. I could try to hound them for the rest of their lives, but that would require hiring lawyers and private investigators, and it would probably cost me more than I would ever collect.

Also, if you intend to hold the investment long term don't forget to include expected capital appreciation in your return calculations.

Don't forget the principal portion of your mortgage payment is profit as well.
Also you should be able to make 1% on your the property even after adjusting for depreciation.

4
401k vs. real estate for someone who is great at saving?