If I know the monthly interest rate r (as fraction), I can use following formulae for each deposit and add up the amounts:

or for continuous compounding:

But how to calculate r when other values are known? Thanks for your help.

Here is quick demo calculation. The effective interest rate comes out at 8.85525 %

The syntax is Mathematica. 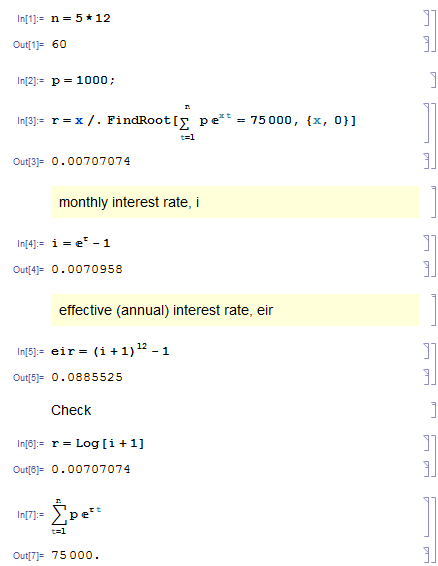 You are dealing with regular, periodic payments. There are formulas in the source you cite for this situation, but none of those formulas will allow you to find the interest rate necessary to turn a series of regular payments into a specified final amount. The only way is to use trial and error; trying different interest rates with the given payment information until you find the one producing the desires amount.

Fortunately, many online calculators are available to carry out these trial and error calculations. More simply, Excel supplies a function, RATE, that will give the interest rate for a given series of payments.

The first step is to write the final amount in terms of the interest rate. This is a geometric series, so we can use the corresponding formulae. It's not exactly clear what the situation is, but if you're depositing at the end of each month, and getting your money back at the end of the 60th month (in which case the last payment is immediately returned), you have

If you have to wait a month after the last payment to get your money back, then it would be

If you pay at the beginning of each month, and get the money back at the end of the 60th month, then it's

(Note: you used r for the interest rate. I believe that usually i is used for interest, and r is used for the quantity 1+i, which is how I am using it. I'm also using it to refer to the monthly rate.)

In Excel, you could fill 0 cells with that formula, take the sum, and then use goal seek to find r such that the sum is 75000. In R, the formula is

You can define a function that returns how far you are from your goal of 75000:

Then you can use a root-finding function, for instance uniroot. To use uniroot, you need a guess as to something you think is less than the desired number, and a guess that's above. Clearly, you're getting some interest, so r is above 1, and you're not doubling your number, so it looks like it's below 2. So I'll use those as lower and upper bounds.

You will most probably do this in excel I think so there you go:

Manual calculation require you to solve for r in the following equation:

Not the answer you're looking for? Browse other questions tagged interest-rate investing compound-interest or ask your own question.

2
Interest rate question
2
Effective Interest Rate Interpretation
2
Is there a formula for the future value of a series of monthly deposits with interest compounded weekly?
0
What is Systematic about Systematic Investment Plan (SIP) and who invented it?
3
Which compound interest formula can I use to find the final balance with monthly contributions that increase yearly?
2
Understanding effective interest rate and compounding period
1
effective rate loan installment
0
How to calculate equivalent interest rate of gains with monthly contributions?
1
Calculating Effective Annual Interest Rate & Annual Percentage Rate with fees (in R)