What is the simplest way to describe indexed universal life?

Indexed universal life seems to be pretty popular these days, but it also comes off as very complex with a lot of small print.

Without getting too complex, whats the simplest way to describe what it does, how it works, and how it's more effective than buy term and invest the difference?

I don't see how it's any different than variable universal life insurance, but that it can be sold by a non-registered person.

I would call it a financial product designed to ensure that its salesmen can send their kids to college and afford an excellent retirement. It offers the illusion of protection at a high cost. I'll use Thevin's numbers to illustrate how the cap would have affected one's returns over the last 20 years. 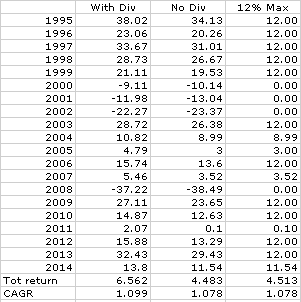 You can debate the numbers all day long, but in the end, you trade a significant portion of your potential return for the feeling of 'safety'. You slept well for 20 years and laughed at the negative years, the crash of 2008, etc, but in the end, my $65620 can withstand a 30% drop as it continues to grow ahead of that $45K. The IUL will lag the S&P by 2% as I've shown, and every instance of "saving you from a crash or negative year" will be offset by the 20%+ return years that are clipped down to 12%. You can see 4 zeroes over 20 years, but also 11 years the returns were capped at 12%.

The data is easily imported from MoneyChimp, and you can see for yourself for any time period back to 1871.

Edit - I was thinking about the longer term, and ran the number for the 30 year period 1985-2014. These were the returns for the extra decade:

You can see, 5 years of 12% capped returns, 2 zeros, one of which occurs in a year that was actually positive for the rest of us, in 1994, even though the index was down, the return with dividends was positive.

And the 30 year summary:

The IUL returned $90,797 on the investor's $10K, vs the $255,051 the S&P indexer saw. Thevin's answer states "This is one of many crediting strategies, but this is one that is most popular and easy to understand. It allows you to particate in the market gains, without the risk of losing your money in a market downturn." From my experience, this crediting is one of the more favorable. I've seen IULs return even less, on average over the years. To the extent one would have been better off in CDs or bonds over the same period.

On a final note - when analyzing a UIL, make sure you understand the crediting rules. Take the time to back test to see how it would have performed over time vs a simple S&P ETF or S&P/bond mix.

Indexed Universal Life is a permanent life insurance policy that credits you interest on your cash value based on a particular market index or a set of indices. It will typically allows you to earn interest up to a maximum percentage cap and guarantees you a floor (zero in most cases).

The important fact to recognized that it is a INTEREST CREDITING METHOD. A crediting method that is agreed upon between you and the insurance company. Same way an Universal Life policy gives you an agreed upon fixed interest rate.

Over a time period, the insurance company looks an index from the begining of the period and the end of the period to see how much the index has risen or fallen. A simple example: Cap of 12% and a floor of 0%.

This is one of many crediting strategies, but this is one that is most popular and easy to understand. It allows you to particate in the market gains, without the risk of losing your money in a market downturn.

Pretty simple. Part of your 'premium' goes for cost of life insurance, and the other goes into a cash value account.

The owner can allocate cash value amounts to either a fixed account or an equity index account. Policies offer a variety of well-known indexes such as the S&P 500 or the Nasdaq 100. IUL policies are more volatile than fixed ULs, but less risky than variable universal life policies because no money is actually invested in equity positions.