Does it make sense to trade my GOOGL shares for GOOG and pocket the difference?

I owned some GOOG shares at the split so now I have GOOG and GOOGL. Does it make sense to sell all my GOOGL shares, and buy GOOG shares and pocket the difference; presuming that the difference is greater than the transaction costs? Then get reimbursed by Google AGAIN for the difference after a year? Theoretically, I could trade the spread throughout the year, right?

How does it work*?

To keep it simple, let's say that A shares trade at 500 on average between April 2nd 2014 and April 1st 2015 (one year anniversary), then if C shares trade on average:

The payment will be made either in cash or in shares within 90 days.

Can you make money out of it?

The difficulties come from the fact that the formula is based on an average price over a year, which is not directly tradable, and that the spread is only covered between 1% and 5%.

In practice, it is unlikely that the market will attribute a large premium to voting shares considering that Page&Brin keep the majority and any discount of Cs vs As above 2-3% (to include cost of trading + borrowing) will probably trigger some arbitrage which will prevent it to extend too much. But there is no guarantee.

How is it going so far?

FYI here is what the spread has looked like since April 3rd: 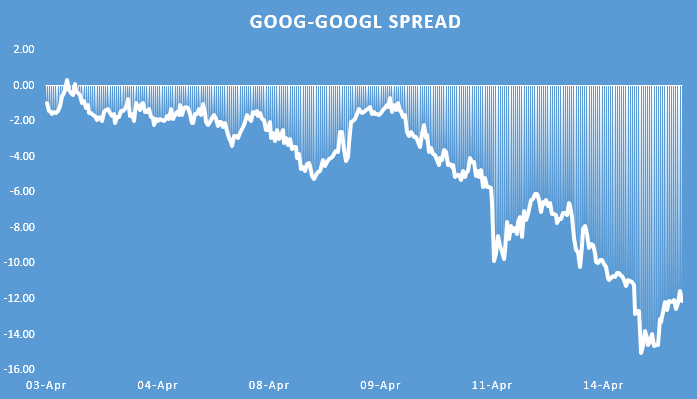 It appears very possible that Google will not have to pay any class C holders the settlement amount, given the structure of the settlement. This is precisely because of the arbitrage opportunity you've highlighted. This idea was mentioned last summer in Dealbreaker.

As explained in a Dealbook article:

The settlement requires Google to pay the following amounts if, one year from the issuance of the Class C shares, the value diverges according to the following formula:

In other words, the value of a stock can be displayed as:

If we ignore dividend and voting values, and ignore premiums and discounts for risk and so forth, then the value of a share is basic equity value plus anticipated settlement payoff. The Google Class C settlement is structured to reduce the payoff as the value converges. And the practice of arbitrage guarantees (if you buy into at least semi-strong EMH) that the price of C shares will be shored up by arbitrageurs that want the payoff.

The voting value of GOOGL is effectively zero, since the non-traded Class B shares control all company decisions. So the value of the Class A GOOGL voting is virtually zero for the time being. The only divergence between GOOGL and GOOG price is dividends (which I believe is supposed to be the same) and the settlement payoff. Somebody who places zero value on the vote and who expects dividend difference to be zero should always prefer to buy GOOG to GOOGL until the price is equal, disregarding the settlement.

So technically someone is better off owning GOOG, if dividends are the same and market prices are equal, just because the vote is worthless and the nonzero chance of a future settlement payoff is gravy.

The arbitrage itself is present because a share that costs (as in the article) $429.75 is worth $445.95 if the settlement pays out at that rate. The stable equilibrium is probably either just before or just after the threshold where the settlement pays off, depending on how reliably arbitrageurs can predict the movement of GOOG and GOOGL.

If I can buy a given stock for X but know that it's worth X+1, then I'm willing to pay up to X+1. In the google case, the GOOG stock is worth X+S, where S is an uncertain settlement payment that could be zero or could be substantial. We have six tiers of S (counting zero payoff), so that the price is likely to follow a pattern from X to X+S5 to X-S5+S4 to X-S4+S3, and climbing the tier ladder until it lands in the frontier between X+S1 and X+S0. Every time it jumps into X+S1, people should be willing to pay that new amount for GOOG, so the price moves out of payoff range and into X+S0, where people will only pay X.

I'm actually simplifying here, since technically this is all based on future expectations. So the actual price you'd pay is expressed thus:

Plus you'd technically have to present value the whole thing for the time horizon, since the payoff is in a year. Note that I've shunted any voting/dividend analysis into X. It's reasonable to thing that S5, S4, S3, and maybe S2 are nearly zero, given the open arbitrage opportunity. And we know that S0 times 0% of D is zero. So the real analysis, again ignoring PV, is thus:

Which is a long way of saying: what are the odds that GOOG will happen to be worth no more than 99% of GOOGL on the payoff determination date?

Too much fiddling with your portfolio if the difference is 3-4% or less (as it's become in recent months). Hands off is the better advice. As for buying shares, go for whichever is the cheapest (i.e. Goog rather than Googl) because the voting right with the latter is merely symbolic. And who attends shareholders' meetings, for Pete's sake?

On the other hand, if your holdings in the company are way up in the triple (maybe even quadruple) figures, then it might make sense to do the math and take the time to squeeze an extra percentage point or two out of your Googl purchases. The idle rich occupying the exclusive club that includes only the top 1% of the population needs to have somethinng to do with its time. Meanwhile, the rest of us are scrambling to make a living--leaving only enough time to visit our portfolios as often as Buffett advises (about twice a year).

Not the answer you're looking for? Browse other questions tagged stock-split google or ask your own question.

30
Difference between GOOGL and GOOG
10
Is there any reason to buy shares before/after a split?
10
How does Yahoo finance adjust stock data for splits and dividends?
1
When a publicly traded company splits into two how are common shares fairly valued, distributed?
1
Difference between 'split and redemption' of shares and dividend