Superannuation: When low risk options have higher return, what to do?

I have heard many times that if you are a young worker who still has many many years ahead of you before you retire, you should choose a relatively high risk/return investment option for your super, because over the long term it yields more than a safer lower return option.

The problem is, I have checked several super funds, and for ALL of them their lower risk options have a higher 5/7/10year return than their higher yield/risk ones. (and of course lower return for shorter terms)

So my question is, should I trust this common advice or not?

The long term view you are referring to would be over 30 to 40 years (i.e. your working life). Yes in general you should be going for higher growth options when you are young. As you approach retirement you may change to a more balanced or capital guaranteed option.

As the higher growth options will have a larger proportion of funds invested into higher growth assets like shares and property, they will be affected by market movements in these asset classes. So when there is a market crash like with the GFC in 2007/2008 and share prices drop by 40% to 50%, then this will have an effect on your superannuation returns for that year. I would say that if your fund was invested mainly in the Australian stock market over the last 7 years your returns would still be lower than what they were in mid-2007, due to the stock market falls in late 2007 and early 2008. This would mean that for the 7 year time frame your returns would be lower than a balanced or capital guaranteed fund where a majority of funds are invested in bonds and other fixed interest products.

However, I would say that for the 5 and possibly the 10 year time frames the returns of the high growth options should have outperformed the balanced and capital guaranteed options. 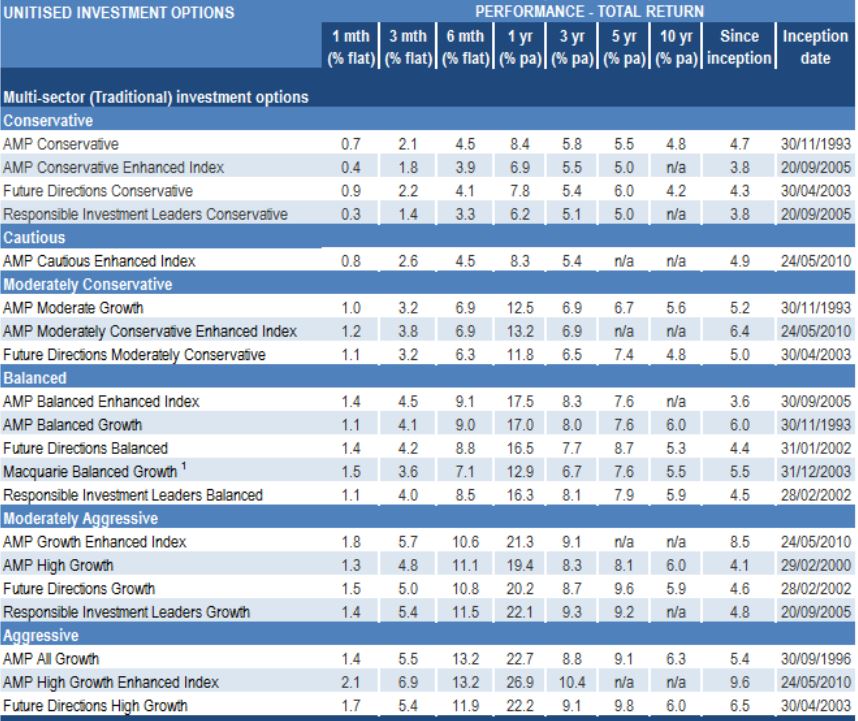 Also, if a fund has relatively low returns during a period when the market is booming, maybe this is not a good fund to choose. Conversely, it the fund doesn't perform too badly when the market has just crashed, may be it is worth further investigating. You should always try to compare the performance to the market in general and other similar funds.

Remember, super should be looked at over a 30 to 40 year time frame, and it is a good idea to get interested in how your fund is performing from an early age, instead of worrying about it only a few years before retirement.

Not the answer you're looking for? Browse other questions tagged australia investment-strategies superannuation or ask your own question.

1
Can I claim a SuperAnnuation -loss- on my 2011-2012 Australian Tax Office tax return?
4
Is it wise to switch investment strategy frequently?
1
When is a higher return not desireable in a Retirement Fund?
3
What percentage of my money should I invest outside my country?
0
Low risk hybrid investment strategy
1
Is there any advantage or strategy in buying/investing shares of many companies spread-out vs. fewer/more selective ones all-in?
2
What are my options for cashing out or consolidating my Kiwisaver and Australian Super?
1
What are some long term and low risk investment options for someone closer to retirement?