What should I do with the change in my change-jar?

My change-jar is full, mostly with denominations < 50p. Last time I emptied it, I took it to a machine at the supermarket: 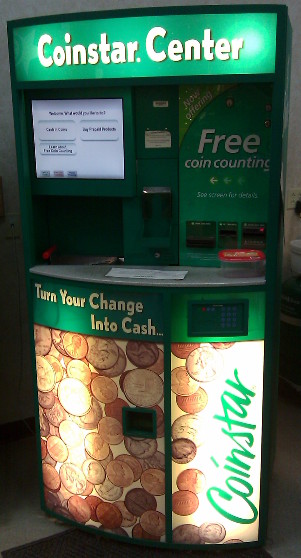 ...but it charged me for the privilege of turning my change into usable funds to the order of 8.9% - quite a large cut.

How can I turn my full change-jar into usable cash as efficiently as possible?

Every now and then I fill a pocket with a handful of coins and spend it on a very small shop on my way home, i.e. a loaf of bread (£1.50), a pint of milk (50p) by using the self-check out (Tesco/Sainsbury's) which has a coin slot or even better the little bowl where you put coins down. I find this pretty straightforward. There's no point having a jar at home worth £50.

I don't like paying the percentage on the supermarket coin counters, and don't feel like buying a coin counter so I have my own solution. I keep higher value coins for vending machines, parking meters etc, and lower value coins I put in charity boxes.

Are you in an occupation that regularly collects change or is this change left in your pocket at the end of the day?

Here in the US it is typically worth it to invest in some automatic coin counters if you are in an occupation that regularly collects coins. In your case you can collect the little baggies from the bank, use your coin counters and then make a deposit. Here is an example of US coin counters.

If it is just pocket change then in the morning, make it a habit of taking some with you. This way you are less likely to break larger bills. Also if you are making a deposit at the bank, add some change to the deposit without making it to annoying.

In the U.S. at least, a lot of these CoinStar machines are now owned and operated by the store or other venue in which they're placed, as a convenience to customers, and the fee for using it is waived.

These machines, even without a fee attached, are still beneficial to the store, for two reasons. First, they bring in potential customers; the machine usually spits out a ticket that you take to the cashier, meaning you pass by all the impulse items they put in the checkout lines, and someone using the change catcher will invariably pick up a pack of gum or a magazine to spend your newfound wealth. The fact that one store has a change machine while another doesn't can also be the difference between choosing that store over the other for a planned shopping trip.

Second, and less obvious, a store that owns a CoinStar machine has full access to the change people put in it (hey, they own the machine and are paying out cash on the receipts it spits out). During normal use of a cash drawer or register to take in money, large bills ($20/20€ or larger) are accumulated to be "broken", small to medium bills (1-10 units) stay roughly static in number as payments are made and larger bills are broken, and coins are invariably depleted as change is paid out. This means the average retail store needs a constant incoming supply of coinage, and that generally happens either through armored car service or similar commercial banking (which costs the store money), or through "change catchers" like gumball machines (which usually can't supply all the needed denominations). The Coinstar machine effectively reverses at least a portion of this attrition of coins and accumulation of large bills; the store can now receive coins and pay out large bills as a part of its day to day business, reducing or even eliminating the need to have a bank or armored car perform this service.

Anyway, check and see whether the CoinStar machine you last used is still operating on a percentage-fee basis; it might be the case that the store has purchased the machine outright and is offering its services free of charge. If not, look around; other stores may be waiving the CoinStar fee where this one isn't (or they may have similar, non-CoinStar branded machines). Lastly, as other answers have mentioned, if you cash out in the form of a gift card, there's no fee, so you can pick a gift card to a store you're likely to visit anyway; in the U.S. there are a lot of good choices, like home improvement stores, Starbucks, major department stores/clothing retailers, and even an airline.

I don't know if those machines work this way in the UK too, but here in the US you can often avoid the coin-counting fee if you opt to convert the money into a gift certificate instead of cash. I routinely convert my coins to Amazon gift certificate money with no charge. Individual machines differ in which particular gift cards they use, but at the least, almost all of them offer the option for a no-fee conversion to a voucher/gift certificate to the store where the machine is. So it's likely you'd be able to use the machine to convert the cash to "money" you can use to buy groceries.

Not the answer you're looking for? Browse other questions tagged united-kingdom cash coins or ask your own question.

22
How to get rid of spare change

22
How to get rid of spare change
2
What to do with copper coins in Australia
10
Bank will not accept loose change. Is this legal?
2
Moving out of the UK. What should I do with my UK personal pension?
0
What practical issues would there be with mostly hollow coinage?
0
How to Sell Coins with Confidence