Many websites/experts claim that the longer you hold your assets, the likelier your asset's return is closer to that predicted by the compound interest formula.

However, some other experts claim that this is wrong based on the Modern Portfolio Theory and in fact the probability the asset growth will be at least that will decrease as you hold your assets longer.

The chart below essentially shows how the probability distribution of asset growth changes over time with a portfolio of an expected return = 0.05 and risk = 0.2. In this simulation, the probability of you getting at least the expected amount as per compound interest is 46% on first year, 42% on fifth year, 38% on tenth year etc.

The simulation is available here

a) Is this simulation a correct conclusion of Modern Portfolio Theory?
b) If it is correct, will using DCA change the behavior of asset growth? (To be more specific, will the most likely asset growth still be in the negative under a portfolio with e.g. return=0.05 and risk=0.2 when I use DCA?)

The question "do they?" is a fair one, but the answer, "we can only observe the past, and that's what they did," may not be so satisfying to you.

It's safe to say that any longer term view of any market will show far less volatility than a short one. It only takes a glance at the return of the 2000's

(for the S&P) to see that in an awful decade containing -37% and -22% that the full decade was "only" down 9% in total or just less than 1% per year compounded. I'm not predicting any particular returns forward, just noting this is how the math works.

DCA performs well through such a decade, better than in a rising one. You are offered the opportunity to buy into a market selling below the long term trend.

Added note in response to Enno's answer below -

On rereading the linked article, I see where the author cites Zvi Bodie who clearly made a logical error. He concludes that since a 20 month S&P put costs triple what a 2.3 mo put costs, that there's more risk the market falls over the longer period, not less. American options can be sold or exercised at any time. If a 2 year option were cheaper than a 2 month option, no one would buy the shorter term. It's pretty simple that the Options Pricing Models take time into account and their value, put or call, increases along with the time till expiration.

I researched quite a bit around this topic, and it seems that this is indeed false. Long ter asset growth does not converge to the compound interest rate of expected return. While it is true that standard deviations of annualized return decrease over time, because the asset value itself changes over time, the standard deviations of the total return actually increases.

Thus, it is wrong to say that you can take increased risk because you have a longer time horizon. 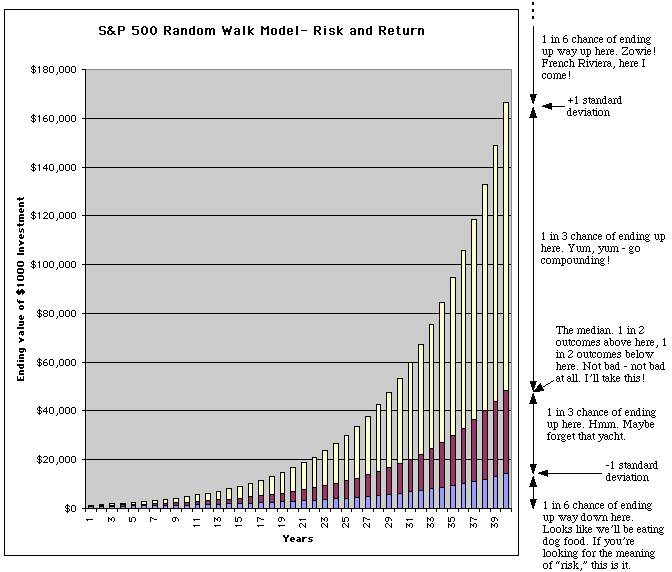 Not the answer you're looking for? Browse other questions tagged asset-allocation portfolio risk dollar-cost-averaging risk-management or ask your own question.

8
The Asset Allocation Paradox
7
Effect of a "Bond Bubble" Bursting?
4
What is the theory behind Rick Van Ness's risk calculation in the video about diversification?
6
Is there a term for the risk of investing in an asset with a positive but inferior return?
1
Do bond interest rate risk premiums only compensate for the amount investors might lose?
10
Is there data and proof that a diversified portfolio can generate higher returns than the S&P 500 Index?
3
How can I compare the risk of different investing opportunities?
5
Is the risk premium with insurance higher or lower than investments?
2
How aggressive should my personal portfolio be?