I have some money I intend to invest over the next 3-4 years. An important chunk of my portfolio would be invested in a stock market index ETF such as one representing the S&P 500. Unfortunately, the S&P 500 has hit all-time highs recently.

I wouldn't be buying a big chunk now, but investing monthly over the next 3-4 years, so if the market were to crash tomorrow (or at some point during that period) I'm reasoning it wouldn't be that bad. I've run some simulations and this strategy seems to work, but I'm unconvinced.

Under this kind of scenario, would it make sense to buy anyway?

The alternative I'm considering is buying bonds and just waiting until the next crash to buy. I'd be missing on the returns from now until the crash (that may take a loooong time to come) but I'd be getting some returns for low risk and essentially buying time. OTOH, that sounds like market timing, and everything I read is against trying to time the market (and I agree).

Any insights to break the mental knot I got myself into? 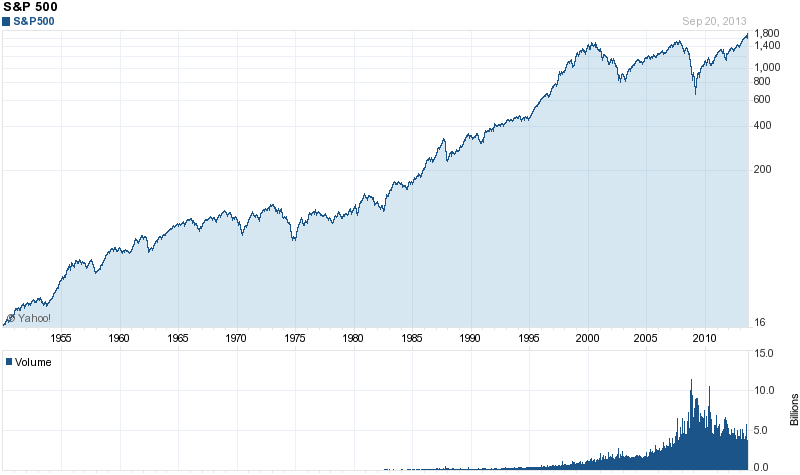 The behavior since ~2000 has been weird, by historical standards. And it's very easy, looking at that graph, to say "yes! I would have made so much money had I invested in March '09!". Of course, back in March '09, it wasn't so clear that was the bottom.

But, yes, over the last 10 years or so, you could have made more money by adopting a rule that you'll accumulate cash in a FDIC (or similar) insured savings account, and dump it into an S&P index fund/ETF when the index is n% off its high.

Of course, if you look at the rest of the chart, that strategy looks a lot less promising. Start in the early 80's, and you'd have held cash until the crash in 2000.

"In other words, to a first-order approximation, the S&P 500 is always at an all-time high."

I'm going to run with this observation a bit. The crash of '87 was remarkable. It was a drop of 1/3 in a short time, yet, when one looked at the year, the Dow was up nearly 5% with dividends included. A one-year Rip Van Winkler would have woken up thinking it an unremarkable year.

I actually recall a conversation I had on Aug 25th 1987. I was discussing the market with a colleague over lunch, and while I didn't call the top that day, I remarked that it didn't matter much, that 5-10 years later just staying in the market would have been the right thing.

Compare this 87-95 chart to the longer term chart derobert shows. In his chart, this is all but a blip. In my chart you can see it took about 3-1/2 years to be in the black, as the market then shot up from there. A dollar cost averager would not have bought at that short term high, well not more than a tiny bit.

The best I can do to conclude is to say I'd never just buy in all at once. You buy in over time, X% of your income each month (i.e. dollar cost averaging), and if you have a chunk to invest, smooth it out over a few years.

In 1929 the Dow Jones Industrial Average peaked at roughly 390 just prior to the Great Depression. It did not return to that level again until 25 years later in 1954. 25 years is a long time to go without any returns, especially if you are a retiree.

There is no easy answer with investing. Trying to time the tops and bottoms is widely regarded as a foolhardy endeavor, but whenever you invest you expose yourself to the possibility of this scenario.

The only thing I highly recommend is not to base your decision on the historical returns from 1975 to 2000 that the other answers have presented. These returns can be explained by policy changes that many are coming to understand are unsustainable. The growth of our debt, income inequality, and monetary manipulation by central banks are all reasons to be skeptical of future returns. 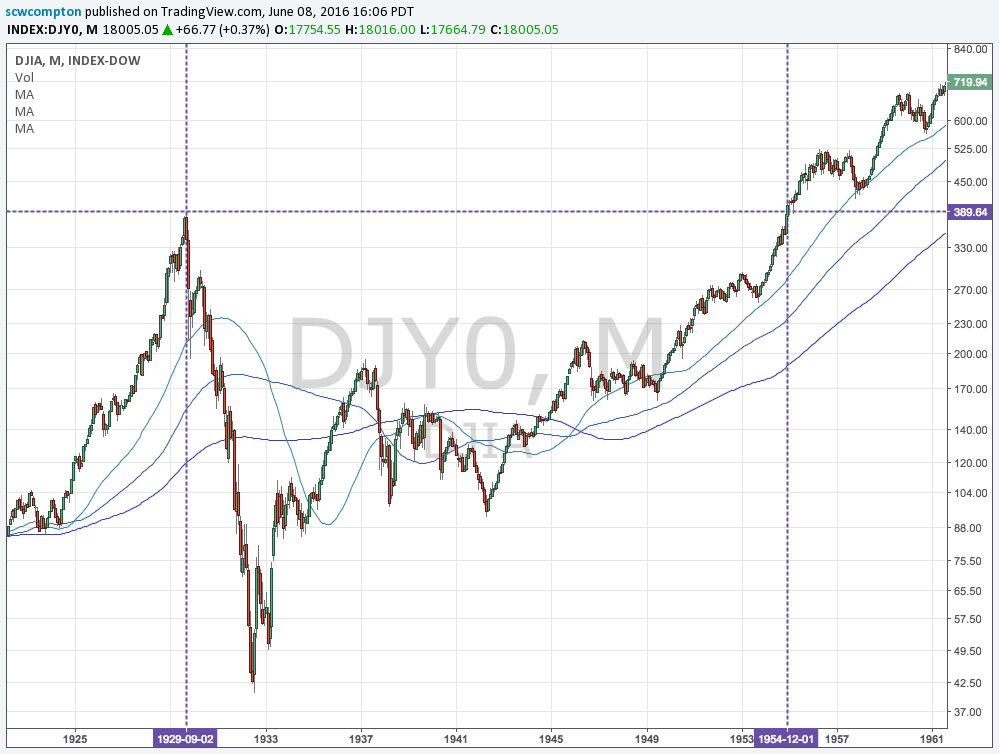 Being long the S&P Index ETF you can expect to make money. The index itself will never "crash" because the individual stocks in it are simply removed when they begin performing badly. This is not to say that the S&P Index won't lose 80% of its value in an instant (or over a few trading sessions if circuit breakers are considered), but even in the 2008 correction, the S&P still traded far above book value.

With this in mind, you have to realize, that despite common sentiment, the indexes are hardly representative of "the market". They are just a derivative, and as you might be aware, derivatives can enable financial tricks far removed from reality. Regarding index funds, if a small group of people decide that 401k's are performing badly, then they will simply rebalance the components of the indexes with companies that are doing well. The headline will be "S&P makes ANOTHER record high today"

So although panic selling can disrupt the order book, especially during periods of illiquidity, with the current structure "the stock market" being based off of three composite indexes, can never crash, because there will always exist a company that is not exposed to broad market fluctuations and will be performing better by fundamentals and share price.

Similarly, you collect dividends from the index ETFs. You can also sell covered calls on your holdings. The CBOE has a chart through the 2008 crisis showing your theoretical profit and loss if you sold calls 2 standard deviations out of the money, at every monthly interval.

If you are going to be holding an index ETF for a long time, then you shouldn't be concerned about its share price at all, since the returns would be pretty abysmal either way, but it should suffice for hedging inflation.

The simple answer is:

Where 'think' stands for "after your calculations, and guts/intuitions, and analysis", of course.

Not the answer you're looking for? Browse other questions tagged stock-markets market-indexes investment-strategies dollar-cost-averaging or ask your own question.

18
Can you explain why it's better to invest now rather than waiting for the market to dip?
3
What can I do when the trading price of a stock or ETF I want to buy is too high?
3
When to start investing in an index fund? Wait for a bear market, use dollar cost-averaging, or another approach?
1
Planing to invest into DAX/S&P500/NASDAQ100 soon. Should wait for market crash?

26
Will the popularity of index funds cause a pricing bubble in the stocks that make up an index?
6
Does it make sense to talk about an ETF or index in terms of technical indicators?
9
Over how much time should I dollar-cost-average my bonus from cash into mutual funds?
1
Historical components of the Nikkei 225 index over time (pre-2000)?
4
How has the country exposure of the FTSE All-World High Dividend Yield Index and the FTSE All-World Index changed with time?
0
Investing in a growth stock periodically
3
Does the demand for an index ETF make its stock price go up?
4
Implications of buying a house during/ after a stock market crash?
1
When does timing the market make sense