I'm taking an intro to quant finance course online. I'm trying to better understand the properties and uses of continuously compounded returns. Specifically for this question, how can you have negative returns less than -100%? In an example problem given, there is a monthly cc return of -.20. We are told if we get that same RoR each month for 12 months, what is our return on a year? Answer given: 12 x (-.20) = -2.4 (-240%).

Is this of any practical use?

What you're missing is the continuous compounding computation doesn't work that way. If you compound over n periods of time and a rate of return of r, the formula is e^(r*n), as you have to multiply the returns together with a mulitplicative base of 1. Otherwise consider what 0 does to your formula. If I get a zero return, I have a zero result which doesn't make sense. However, in my formula I'd still get the 1 which is what I'm starting and thus the no effect is the intended result.

Continuous compounding would give e^(-.20*12) = e^(-2.4) = .0907 which is a -91% return so for each $100 invested, the person ends up with $9.07 left at the end. It may help to picture that the function e^(-x) does asymptotically approach zero as x tends to infinity, but that is as bad as it can get, so one doesn't cross into the negative unless one wants to do returns in a Complex number system with imaginary numbers in here somehow.

Consider someone starting with $100 and take 20% off time and time again you'd see this as it would go down to $80 after the first month and then down to $64 the second month as the amount gets lower the amount taken off gets lower too. This can be continued for all 12 terms. Note that the second case isn't another $20 loss but only $16 though it is the same percentage overall.

Some retail stores may do discounts on discounts so this can happen in reality. Take 50% off of something already marked down 50% and it isn't free, it is down 75% in total. Just to give a real world example where while you think a half and a half is a whole, taking half and then half of a half is only three fourths, sorry to say. You could do this with an apple or a pizza if you want a food example to consider.

Alternatively, consider the classic up and down case where an investment goes up 10% and down 10%. On the surface, these should cancel and negate each other, right? No, in fact the total return is down 1% as the computation would be (1.1)(.9)=.99 which is slightly less than 1.

Continuous compounding may be a bit exotic from a Mathematical concept but the idea of handling geometric means and how compounding returns comes together is something that is rather practical for people to consider.

You cannot use continuous compounding for returns less than or equal to 100% because a natural logarithm can only be taken for a positive amount. This answer includes the accurate way to ascertain r, for which many people use an approximation.

Why? Because a natural logarithm can only be taken for a positive amount. 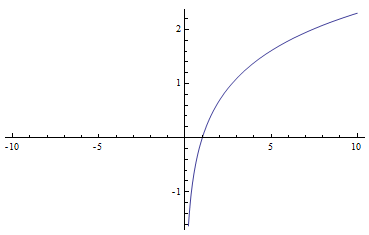 So the latter calculation can not be done using (logarithmic) continuous compounding.

Of course, the calculation can still be done using regular compounding. For -100% the results go to zero in the first month, but -150% produces a more interesting result:

We always have that the final amount equals the initial amount times a growth factor G, and we can express this using a rate r and a day count fraction T.

This nicely illustrates that: