How does the US federal income tax system work?

General question here about US personal income federal tax rates. Is it a cumulative effect where your income is first taxed at the lower tranches and move up, or is it one specific percent for your entire taxable income?

The US federal income tax is a marginal tax rate system, so your total tax is calculated cumulatively in that you're taxed at different rates for each part of your income that falls in a different tax bracket. Fairmark has a nice table that sums this up for individuals filing taxes on their own: 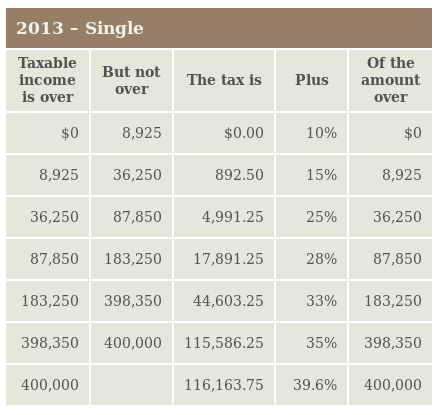 Of course, the US tax system is much more complicated than this, because there are state taxes, Social Security/Medicare taxes, pre-tax deductions, capital gains taxes, etc. In the simplest case, however, this is the basis for how federal income taxes work.

Is it a cumulative effect where your income is first taxed at the lower tranches and move up, or is it one specific percent for your entire taxable income?

These limits are called "brackets", and in the US the tax rates are growing from one bracket to the next. It doesn't necessarily have to be like that, but that's how it is in the US. This is called "progressive" taxation, because the more you earn the higher your marginal tax rate is (because the rates grow from bracket to bracket).

A case where the rates don't grow from bracket to bracket, but go down - is called "regressive" tax rate, because the more you earn the lower your marginal tax rate would be. An example of such tax in the US is the Social Security tax (part of FICA). But I don't know of any country actually implementing that for regular income tax1.

A milder version of regressive taxation is a flat tax (i.e.: all income taxed at the same rate), which is also considered regressive because the lower-income individuals end up paying more taxes than higher income individuals, when compared to their living expenses. In the US, Federal Medicare tax (the other part of FICA) is a flat tax. Some of the States charge flat income taxes. VAT and Sales taxes are also examples of a flat tax.

The dollar amounts for tax brackets are updated yearly by the IRS. For 2013 amounts see this document, table 1.

1Actually I do know. The US Federal corporate income tax brackets do not follow the monotonic upward trend. As you can see from the link, the bracket of $100K-$335K is taxed at 39%, but the next bracket of $335K-$10M is taxed at a lower rate of 34%. The upward trend resumes from there on.

Not the answer you're looking for? Browse other questions tagged united-states income-tax or ask your own question.

19
Am I comparing take-home pay correctly?
10
Why is there a tax bracket less than $2000 wide with 35% marginal tax rate in the U.S.?
9
What is the difference between pre-tax and post-tax paycheck deductions?
5
Is it really possible to save money by giving to charity?
-1
How does income tax work (USA)?

3
How to record business income tax paid, in QuickBooks?
1
Can someone explain how to calculate the "The Tax Is" column of the U.S. Federal tax brackets?
0
Is state/federal taxable income affected by federal/state tax?
0
CA State Income Tax return CA540NR Federal Adjustable Gross Income (AGI)
1
Canadian tax calculation for a sample income
2
Where can I see the local tax rates on capital gains?
3
Deducting Federal Income Tax from State Income Tax Liability